Or how I lost almost 5 billion ISK in virtual assets.

A while back CCP put in a new feature that would give you an estimate of your total worth, liquid ISK and assets combined.  I was a bit dubious of my result, as it showed I had nearly 22 billion ISK in assets squirreled away somewhere.

Wilhelm… back in March

CCP was apparently a bit dubious about the results as well as today’s quick patch includes some changes for the asset calculation.

Happy days, my ISK has increased over the last month.  I am still not rich by any measure, but I have enough to do what I want to do.  Fortunately, what I want generally involves sub-caps.  I am mostly up due to skill injector sales.  The price of injectors has been going up, making that a profitable sideline.

And still that number seems high to me.  It could be over-valuation of collectables as was suggested in the comments of the last post.  I have hung on to all of those over the years.  Among the items I pulled out of Deklein a year back was my commemorative piece of Steve.

In the comments of the last post it was suggested that I check out jEveAssets, a utility that will value you holdings. (Find it here.)  Unlike other things I have tried, jEveAssets has been updated to count assets you have in citadels.  Running that today I get the following output: 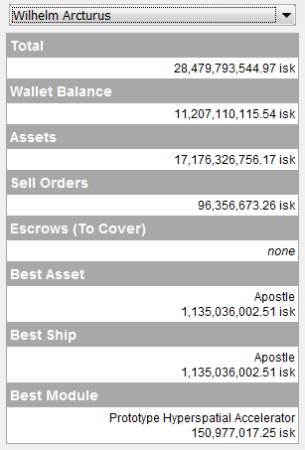 That also puts my assets at about 17 billion, off by about 68 million ISK compared to CCP’s calculation, with CCP being the lower of the two. (Also, Prototype Hyperspatial Accelerators seem to have dropped by about 90 million ISK in price since I last checked.)

That asset count still seems like a lot.  Certainly more than I can account for, though it may still be collectable inflation.  But at least I have two data points that are close this time around.

As you can see, going free-to-play and increased botting activity could only stabilize them for one year, the concurrent logins are exactly where they were a year ago and the summer dip is just coming. Unless they have one more “free to play” level stunt in their sleeves, a year from now they’ll be under 20K concurrent players.

Gevlon, Seems I was right about New Jita

More proof that EVE Online is a special game, Gevlon cannot stop writing about it.  And not just derisive comments in the flow of a narrative about another game, as he does with World of Warcraft, but full on posts about New Eden.

Anyway, he is on the “EVE is dying” path, ever popular with those who dislike the game, with what can be construed as a very specific claim.  He is saying that the average concurrent player logins will be 20k in a year.  (Data source: EVE Offline)

In a post rife with abductive reasoning, unsupported declarations about RMT and botting, and an ongoing tendency to strip facts of their context in order to give them new meaning, he has foreseen the death of EVE Online.  Or, if not death, then a state of decline well beyond anything witnessed previously.

But you cannot argue with him, because he won’t admit any possibility beyond his own conclusions.  His world view is set in stone.  So I’ll just put this post up and we’ll come back to it in a year and see how things have played out.  It is very easy to apply your own narrative to things that have already happened, to claim that CCP “knew” things.  It is altogether a different beast to be able to predict the future.

Finally, I borrowed the term “crater” in the title from Dinsdale.  He likes to say that the PCU has already cratered, while Gevlon is saying that is a coming event. It amuses me that two people who are so angry about the game differ on that front.