Well, it has been warm in Silicon Valley this week, with temperatures up to 90 degrees at times.  After a wet winter that means that more than spring is in the air.  Pollen is a serious, palpable thing outside right now for those of us with allergies.  But a runny nose and a desire for some of those good old “makes you drowsy” allergy meds from my youth won’t stop me from at least doing a bullet points post.

Pokemon Go in the Grass 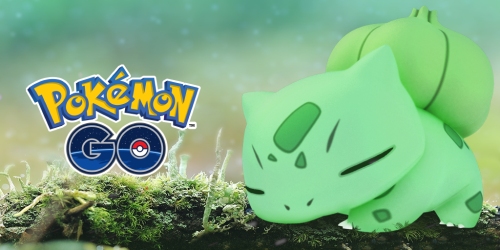 Bulbasaur knows what I am talking about!

Clearly in the spirit of my pain, Niantic is having a Grass Weekend mini-event for Pokemon Go.  Starting this afternoon and ending early Monday grass type Pokemon are supposed to be out in force.  In addition, lures dropped at Pokestops are supposed to last 6 hours rather than the usual 30 minutes.  Will that be enough to lure me out of the house?

Meanwhile, in Pokemon Sun & Moon, there is an in-game event around collecting Poke Beans at the Poke Pelago.  As with the Pokemon Go event, it runs until Monday.  The minimum and bonus thresholds have already been reached, so all you have to do to get some Festival Coins is register in the Festival Plaza, collect some beans, and then go back and update you status.  Details are at the link.  If you are a registered Pokemon Global Link player, you get double the Festival coins plus a level ball and some rare candy as well.

The Ashes of Creation Kickstarter that I wrote about earlier in the week seems to have hit the mid-campaign doldrums already.  After passing a million dollars in the first 36 hours, pledges have slowed down.  That is to be expected.  I will be interested if they have a mid-campaign plan after their very strong start.  Meanwhile, there has been some concerns about Intrepid’s Creative Director and CEO Steven Sharif and the depth of experience of the Ashes of Creation team.  Sharif has responded via an interview with Massively OP.

The Activision Blizzard first quarter results were announced yesterday.  You can find all the data, such that it is, over on their investor relations site.  Blizzard and King were tied as the first quarter net earning powers, with King ahead it gross revenue but Blizzard having a higher margin. 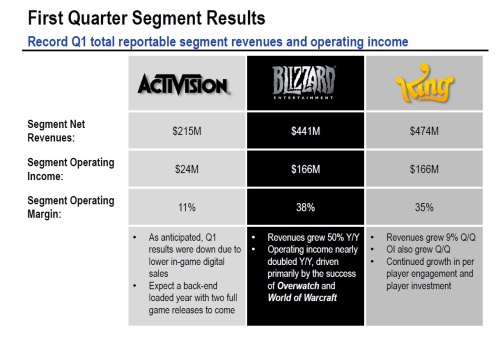 Revenues on Slide 10 of the investor presentation

And yet the big “we’re doing good!” metric remains Monthly Active Users, or MAUs.  I have griped before that MAUs are meaningless without context.  The fact that the two net earners have wildly different MAU numbers (41 million for Blizzard, or less than Activision, and 341 million for King) seems to require at least some details about their disparate business models.

Meanwhile, the report also celebrates Overwatch becoming Blizzard’s eighth “billion dollar” franchise, making me strain my brain to come up with that many.

They must be slicing and dicing what constitutes a franchise to get eight billion dollar earners… or Lost Vikings was more popular than I imagined.  Also, I would argue that WoW is a continuation of the Warcraft franchise.  But marketing will segment how they see fit.

Anyway, back to the land of Benedryl for me.

2 thoughts on “Friday Bullet Points for a Warm Spring Day”