As mentioned in the notes for the YC119.5 update, the Blood Raiders Shipyard is now a thing.  It is a special new PvE event… a null sec raid if you will… that has the possibility of dropping blue print copies of special Blood Raiders capital ships.

The first step in the whole thing is actually finding the shipyard.  There will only ever be one shipyard in space at a time and it will spawn somewhere in Blood Raiders territory, which spans the regions of Delve, Querious, and Period Basis.  In order to locate the shipyard you have to find one of the Blood Raider mining operations and follow ships from there back to the shipyard.

The Imperium incursion SIG went to work finding it after it was supposed to spawn, some time on Thursday, and by Friday the shipyard had been located in the system E-DOF2 in the Period Basis region.  The tale of its discovery is the subject of a post over at INN.

Having found the shipyard, there is the whole “blowing it up” aspect to master now.  As I noted in my post about the YC119.5 update, I am not sure if having the shipyard in our part of space is a blessing or a curse.  From what I heard about the trial runs on the test server, the Blood Raider reaction forces creamed every attacking force by burying it in numbers.  As noted in the story linked above, RED Alliance threw a small Rattlesnake fleet at the shipyard and promptly lost most of it.  INN had follow up posts about further attempts including a force of frigates trying to put the shipyard into reinforcement mode.

The shipyard is a special citadel and only has a single 24 hours reinforcement, which means you only have to go through two rather than three fights to kill it.  But so far nobody has has managed the first fight and it sits there in space unharmed.

Since this was something new in New Eden and not too far from home, I decided to fly down to take a look at the shipyard myself.  That meant setting a course for Period Basis and RED Alliance space.  I got out my alt, put him in his Buzzard (so he could scan down the site), and sent him south.

We are set blue with RED Alliance, so I didn’t have to worry about the locals shooting me.  However, with any space attraction, I did keep alert for possible gate camps on the way down.  Somebody is always looking to shoot tourists.  There were a couple of camps but, fortunately for me, they were blue.

When I arrived at the system I launched combat probes, cloaked up, and then made myself a safe spot from which to work.  For my first scans of the system I was looking for structures, but didn’t come up with any likely results.  I could have save myself some time if I had read the patch notes where it says;

I changed that to ships and found an extremely dense ball of Amarr ships, including Apocalypse and Bhaalgorn battleships.  I narrowed down my focus on that, getting 100% results pretty quickly, then warped in at 100km so I would stay cloaked.

And I landed right on the shipyard and was immediately uncloaked. 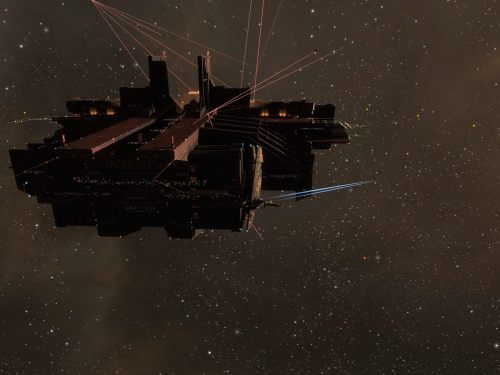 Back to my safe!

I quickly aligned back to my safe spot, bookmarked my position, and then warped back to my safe to cloak up for a return trip.  I warped back at 100km from my bookmark and landed far enough from anything that might decloak me to be safe for the moment.  My overview did not show much going on, just a few people shooting at the structure.

That might have been some of the Succubus frigate fleet mentioned in the INN post.  What I did not see was any Blood Raiders on my overview.  In fact, I didn’t even see the structure, which reminded me that new things in the game often don’t get added to the overview by default.  I added the structure to my travel overview. (The pic above was after I did that.)  They I started looking around in space to see if I could see any Blood Raiders.  They were definitely out there, I could see lasers chasing the frigates around the vicinity of the shipyard. 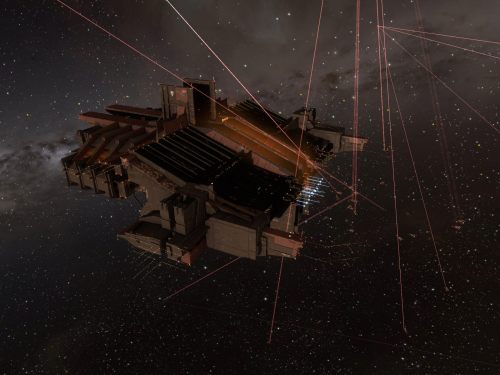 The Shipyard with lasers

Those were dreadnoughts, which seemed to be strewn about the undock area of the shipyard.  But I knew there had to be more ships about.  I tried the default “ALL” overview that CCP provides and was pleasantly surprised to find that they had added the new ships to that.  I have, in the past, had to add things to “ALL.”  And with that I was suddenly aware of just how many Blood Raiders ships were lingering in the area.

A flight of Augoror cruisers orbiting the shipyard

Not many of the ships on grid seemed interested in the frigates flying about taking potshots.  In fact, so far as I could tell, only the Chemosh dreadnoughts seemed to be firing on them.  There was a gaggle of them on the undock and some more spread out around the shipyard. 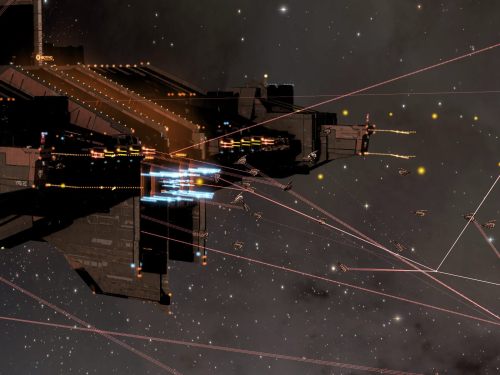 Chemosh dreads on the undock

The subcaps seemed mostly interested in warping off to where every they go when they’re done with their task.  I could see the bright streaks of ships warping away every so often.  However, for every ship warping off I say what seemed to be a couple more stuck mid-warp.  There was a large number of ships either bouncing off the back of the structure or actually withing it that were bumping and bouncing and unable to enter warp.

Or such was my assumption.  I was trying to “look” at ships in space and could not do so with many of them, which is generally a sign they are trying to enter warp.  However, they stayed on the overview and I could, by maneuvering the camera around, see ships actually bouncing off the citadel or poking partially out of it.

The shipyard itself seem unperturbed by events.

Shields barely scratched… or not scratched at all really

The shipyard itself seems to be a standard Upwell Consortium Sotyio structure.  It even says so on the side.  Glad to see that Upwell will sell to anybody with ISK I guess. 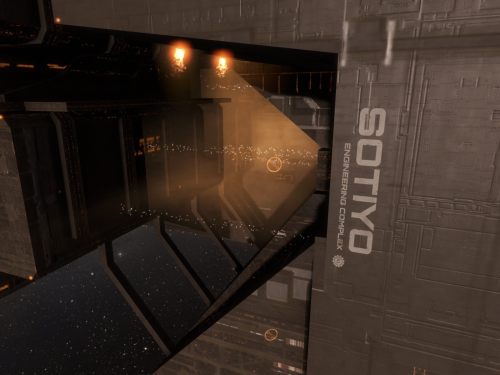 The Blood Raiders opted for a spray-on logo though.  That is a special order item not available to mere capsuleers.

They also get the new logo features that came with the YC119.5 update including alliance logo and CEO portrait along with more spray on logos. 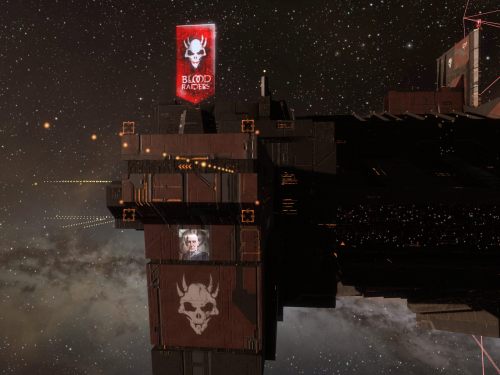 I was amused to see that the Blood Raiders shipyard get the same advertising screens around the undock as player deployed structures.

Waiting for “Vote for Xenuria” to go past again…

The Blood Raiders can get a special paint job and their own logos sprayed on the hull, but they cannot opt out of ads!  Anyway, I saw the big new thing in space and beat Mark726 to it no less!  He’s usually the first space tourist on the scene.

The Blood Raiders Shipyard out in Period Basis

Now to see about blowing the damn thing up.

I know some people are angry that CCP decided to try this version of their new NPC response AI in null sec.  And not just in null sec, but in the Goon corner of null sec no less!  “Grr Gons! Hat Gons!” and all that.  Why should they get the new PvE shiny?

The flip side of course is that this new shiny seems intent on destroying as many player ships as possible by dropping overwhelming forces on them.  I am not sure high sec would put up with that.  I am told that many mission runners like the predictability of rewards and that an AI intent on making things difficult might not be appreciated if that is the case.  That is ever the PvE carebear conundrum, a desire for interesting tasks mixed in with an aversion to any loss.

And who could CCP blob more ironically than the Imperium?  Blobbers blobbed  and killed by blobbing NPCs, film at 11.

Of course, that won’t sate anybody feeling left out, but I find it amusing.  And we shall see how long and how many destroyed ships it takes to destroy the first Blood Raiders Shipyard.