I was sitting around this past weekend staring at my computer, willing it to tell me what to play.  I wanted to play something, get lost in some game away from the real world, but the destination just wasn’t coming to me.

I fiddled with Steam for a bit and Swarm Simulator, but wasn’t really feeling it.  I was tempted for a bit to re-up for Daybreak All Access and jump on to the Agnarr server in EverQuest just to run around again. However, I know how that ends, with me not playing after a few days unless I find a regular group to run with.  Plus it was after dark and spending money online after dark is almost always a mistake.

I’d done a bit of World of Tanks recently, but that wasn’t grabbing me and I wasn’t up for the long patch process that launching War Thunder would no doubt entail.

I considered Elder Scrolls Online for a bit, they having sent me an email recently about how to solo through the game.  That seemed like something aimed at me, but that meant spending money on a game I wasn’t all that interested in outside of the fact that they sent me that email.

I was thinking about just pottering around in Minecraft, but went back to the list of installed games.

Down the list I passed Guild Wars 2.  I wasn’t even sure I remembered my account name, much less the password, but I launched it to see how long it would take to patch up.  I could keep looking while that worked away.

If you look at the Categories drop down on the side bar, you’ll see I made an entry for Guild Wars 2, which is about as firm a commitment as I make to a game ’round these parts.  There are even 37 posts listed under that category.  That doesn’t come close to the twelve hundred or so EVE Online posts, and is a mere tithe of even my Lord of the Rings Online posts.  37 puts it more in line with titles I take note of but haven’t really played all that much, such as Dungeons & Dragons Online, Pirates of the Burning Sea, or the late Need for Speed: World.

And even those post are merely about the game… usually me predicting that NCsoft will make ArenaNet put out an expansion due to declining revenues… rather than about playing the game.

I own the base game, which isn’t saying much since that has been available free since the Heart of Thorns expansion.  But I paid for my copy… which I guess says something.  Sucker, maybe?  Because in the almost five years since GW2 launched I have three posts from about four years ago that involve me actually in game and playing.

And yet there it was, still installed after all this time, requiring no cash outlay and with nothing else was calling to me.  So I dug out the login credential and once the patch process was complete… it zipped by pretty fast… I clicked on “play” and off I went.

I had two characters already created, both of the pseudo-human Norn race, one level 16 and one level 2.  Clearly I did not get far.  But time has moved on, I’ve changed, the world has changed, and I assumed the game probably had as well.  Still, I decided not to reinforce failure and rolled up a new character.

I figured that part of the problem with my past run might have been the race/class/zone combo, so I opted to change that up a bit.  Rather than a Norn melee class I went for a human ranger.  Ranger is never the wrong choice, is it?

I was tempted by the idea of ranged attacks and a pet, being swayed by images of the hunter class in WoW.  Having gone that route I entered the game.

Of course, I’ve forgotten most of what I ever knew about GW2, and what I knew was pretty minimal to start with.  For example, I realized after I was in the game that I couldn’t recall if I had picked a server or had even been offered a choice  Character creation seemed to be mostly about appearance and back story.  I’m a middle-class ranger whose sister ran off with her centaur boyfriend or something.  Also I have a pet bear.

Later, at the character select screen, I noticed that I was tagged as being on the Henge of Denravi server, but could choose whatever world I wanted to play on.

So long as there isn’t a queue to log in, I am not sure that matters.  This is likely to be a solo affair.  But at least I think I knew what to say if somebody asks.

On entering the game I was presented with a row of wiggling icons in the lower right corner over the mini-map.  The first wanted me to please buy the Heart of Thorns expansion.  Given that my previous run into the game stopped at level 16, that seemed like a premature ask.

There was also some sort of “hey, you’re back!” reward for me, a cosmetic outfit which I put on because the starting armor included a quilted jacket that made me look like a zek from the gulag.  I chose the shiny outfit to hide that. 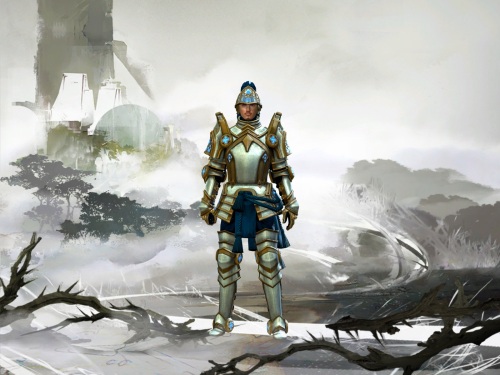 All shiny and ready for whatever

There was also a daily reward… because we won’t play MMOs unless we are rewarded for logging in every single day.  I’m not quite sure what I got from that daily, but I managed to make the prompt go away.

Then it was out into Queensland, the starting area for humans.  Like much of what I have seen of GW2, it was very pretty… and infested with centaurs.  I can see why my sister ended up running with that crowd, they seem to be everywhere.

My initial run at combat seemed to go as expected.  I shot the longbow I was wielding at something… a centaur most likely… then the bear would run out and grab aggro and keep the target at range while I pelted it with arrows until its health bar ran down.  Just what I wanted.  So off I went. 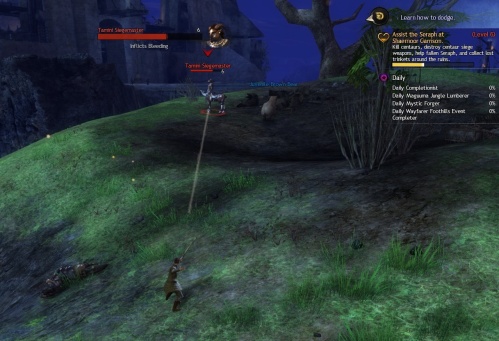 Have you seen my sister? Also, die!

I did see some things that were new… new to me, or forgotten by me so as to seem new… like a grand pop-up every time I made a level. 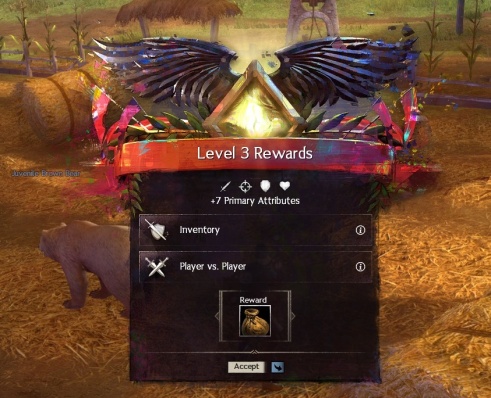 I guess they want people to know what levels mean to them.  And I got a bag with that level, which was good because I was already sitting on a lot of drops and inventory management was looming already.

They also give you a preview of rewards to come, no doubt to entice you to keep leveling up. 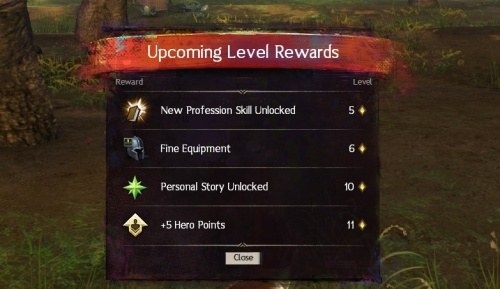 Also a home version of the game and some Rice-a-roni, the San Francisco treat!

There is also the nice little arrow in the upper right that points to places of interest along with the map itself that also makes an effort to get you going in a direction where you might find some adventure.

So here I am in Guild Wars 2.  It might be a flavor of the month, the way Runes of Magic was in May.  We shall see.  I only have to get past level 16 to beat my past effort.