My return to Guild Wars 2 has started off in a somewhat stuttering and haphazard way… which might well describe my wanderings in Runes of Magic last month.  I have not been very invested nor have I sat down and played for long stretches of time.

I’m going to use this logo for every post, you watch

On the flip side of that, GW2 seems pretty well setup to accommodate that lack of commitment and short play sessions.  Basically, the map and completing all of its various points and events not only gives me direction but also ensures I have something to do.  As soon as I log into the game, there is that arrow in the upper right corner pointing me at something.

Sometimes the arrow even points me to a scout who fills in areas of the map for me. 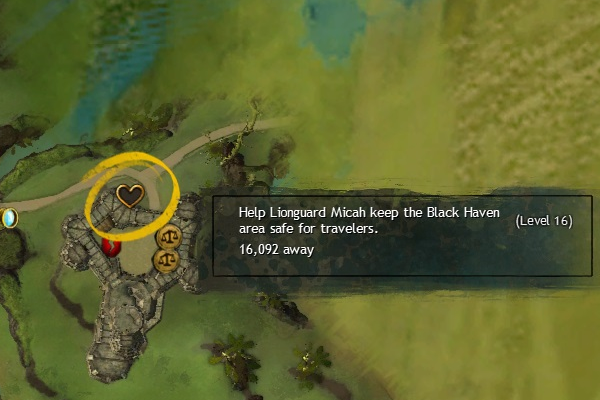 Here is a new place to go and something to do

This mechanic lacks the directness of quests, but in a world mostly lacking in what we might consider traditional quests, the map and its events and points of interest fill in the gap, at least for somebody who tends to be as goal oriented as I am.  So at times I just log in and follow that little pointer around the map, doing events and slaying things as I come across them.

Usually it involved centaurs.  Centaurs are into everything out in the human starter zone. 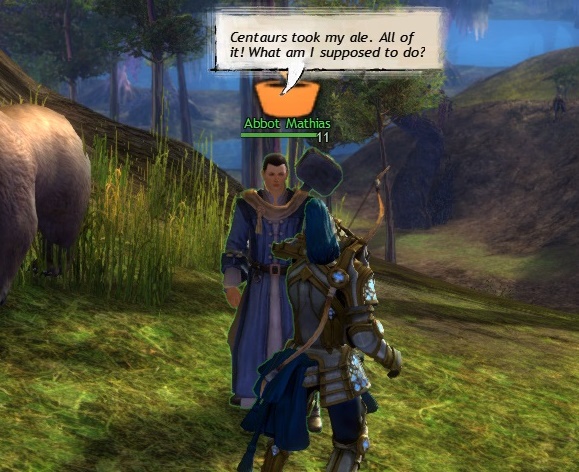 They’re even stealing our booze now!

And then as I wander about the map, going where ever the pointer tells me, I will hit a significant level, in this case 20 and the personal story pops up as a consequence.

Woo hoo, a round number! I get rings… and a story.

Big deal.  People… well, Bhagpuss… have said I can just skip the whole personal story thing.  The problem is that the personal story takes over the pointer of destiny in the upper right hand corner.  The arrow of whim is gone, replaced by a nagging reminder with only one destination.

I could just use the map itself to wander around.  The points are marked, and when they are not it is usually because they are in an area of the map I haven’t been through yet… something that is obvious when looking at the map… so just going there will reveal them.  But I wanted my pointer back, so I schlepped around doing the personal story, as I had done after level 10, in order to get that out of the way.

That wasn’t necessarily a bad thing, just a different, and perhaps more traditional, more quest-like set of things to do.  There were some nice prizes at the end, including a mastery point which even the game says I don’t need to worry about until level 80, which is a long way off.

I was happy with that and happier still to be back to my now standard method of operation.  But the personal story had one more trick to play.  Upon leaving the instance it dumped me out in the middle of two events which succeeded in getting me killed almost immediately.

Oh not that spider again…

The Toxic Spider Queen and falling from high places are my two leading causes of death so far in Tyria.  I have generally been pretty successful with the struggle mechanic that lets you come back from mortal injury, but that just doesn’t work when the damn spider is camped right on top of you.

Once I recovered from that I went back about my wanderings, following the pointer this way and that until I found that I had finished things up and now had two complete zones under my belt… for specific definitions of complete I suppose.

Two zones down, many to go

As noted, this works for the task oriented completionist in me.  And the pace of leveling seemed to be just about in tune with this method.  While I tend to look askance at auto-leveling systems, the GW2 version seems to work pretty well at this point.  In my last attempt at the game, I found myself not keeping up with the content so advancing to the next zone meant either being in over my head in the new content or re-doing the old to level up.

This time around I seemed to have been about right where ever I have gone.  Being a level or two up and having the game down-level me is better than being too many levels down to start with.

So two zones down, many more to go.

The uncovered chunk so far

And my friend the pointer was nice enough to direct me to my next destination.

Along the way I had a few discoveries of quality of life improvements.  The first was suggested in the comments on last week’s post by Orthom, where he pointed out that I could send crafting materials off to storage from anywhere via an option in my inventory window. 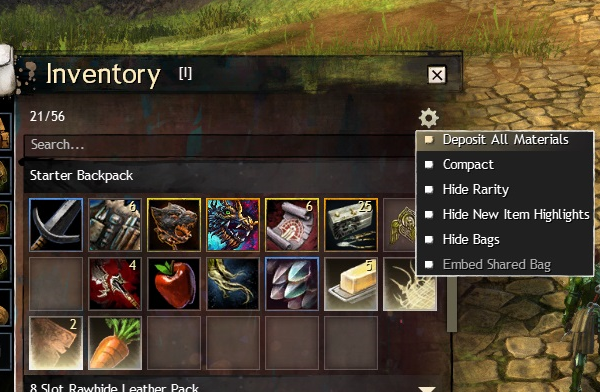 I was aware of the crafting storage, but had only deposited stuff there while at a crafting station.  That went a long way towards helping inventory management.

The second was a bit silly.  I spent a bunch of time walking back and forth in the game because I did not know that teleporting between waypoints for a bit of coin was a thing. 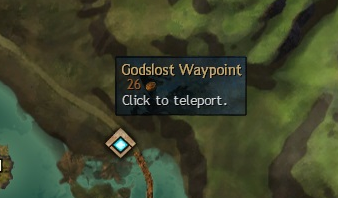 I can just go there for some copper?

So that made life a little easier.  I just wish I had discovered that when I was doing the level 10 personal story line, as that involved quite a bit of running back and forth.

And, finally, I discovered dyes in the game, so changed up my cosmetic armor set to be more ranger-ish in color scheme. 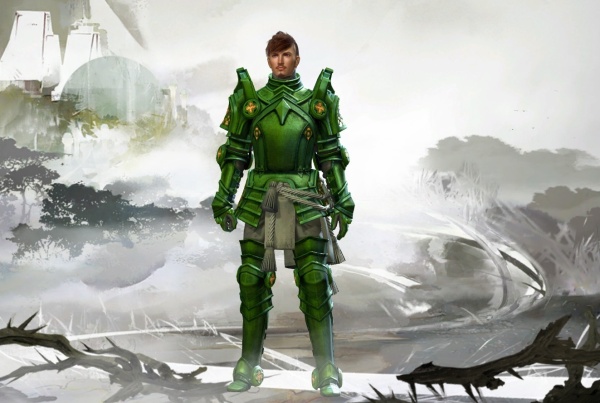 Green on green with gold and gray to off-set

And so it goes.  I am off into the third zone and level 30 and the accompanying personal story looms.