Mini Metro had been on my Steam wish list for a while.

That isn’t saying much.  I put lots of things on my wish list to consider buying later, to look into, or just to remind myself that they exist.  Titles can linger there for ages, waiting for a something to push me either to buy them or drop them from the list.

Fortunately for me… or the game… or both… Zubon did a write-up about the game which tipped the balance in favor of my grabbing it as soon as the Steam Summer Sale hit.  And it is all he said it was, light and simple and elegant in design.

I was a little bit surprised when I first launched the game as it drops you straight into playing.  There is no mucking about in any menus or settings, you’re just on what is essentially the playing field playing the game.  It is a strategy that works with a game of such a spare interface.

At its heart it is the same game as Train Valley, of which I wrote previously.  The player sets up a transit network based on a set of stations which gradually increase over time, servicing a population that has destinations in mind.

Mini Metro sheds all of the non-essentials, paring away money and rewards and switches and collisions, leaving just the necessities.  Your passengers are simple shapes who want to travel to a station that matches them in stylized versions of major cities. 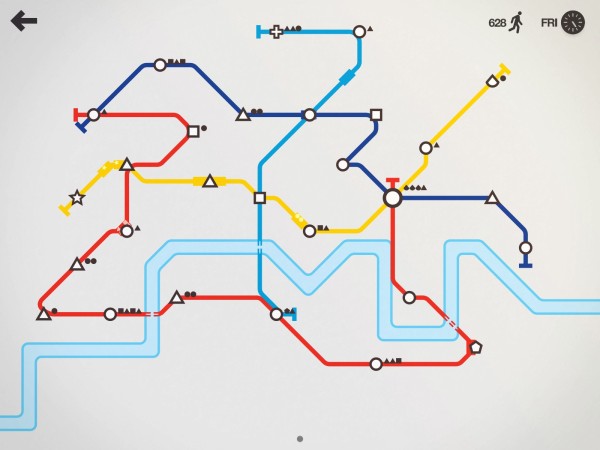 You  passengers are not picky.  If they are circles, they just want to get to one of the likely many circle stations on your map.  Other shapes are more rare, some of them being one per map.  You draw out and change your transit lines by just dragging them.  Your rolling stock are little rectangles that move up and down the line, stopping at stations to pick up or drop off passengers.

There are, of course, constraints.  That is what makes it a game really.

There is a limit on the number of transit lines you can have and tunnels for crossing water and trains and carriages to which you have access.  When a new week starts up every Sunday you are given a new train and the option to add something else in a binary choice.  You might have the option add another line (which will require your train) or a couple of tunnels or a carriage that allows a a train to carry additional passengers, or a special station that loads and unloads passengers more quickly.  But the you only get two options each week and you only get to choose one.

And then there are the passengers, who get upset if your transit system leaves them piling up in stations for too long, with grumpy sounds and angry black timer circles forming if they are backed up. 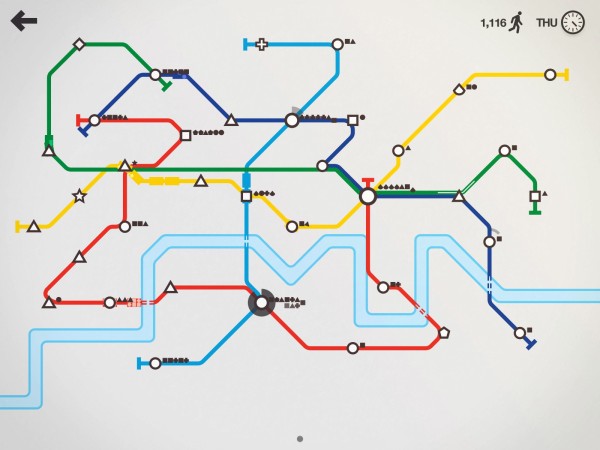 Some unhappy Londoners south of the Thames

Passengers are the ultimate constraint, the one that will end your game.  If the timer circle sweeps through the full 360 degrees, your transit system fails and you are done. 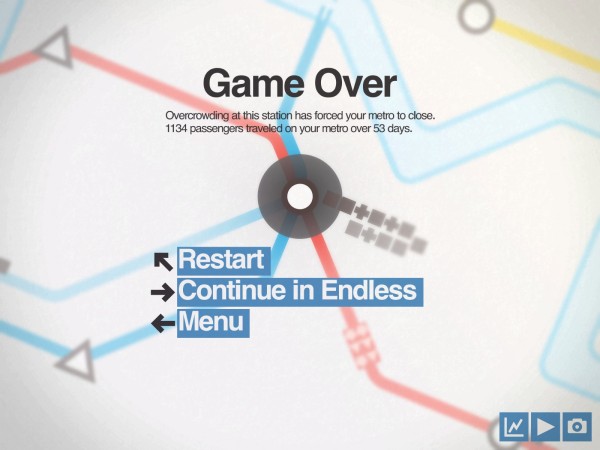 Score is measured in how many passengers you have delivered and how long your transit system lasted.

There is a list of maps representing different international metropolitan environments from London to Paris to New York to Shanghai.  Each map has a simplified representation of the water obstacles the city presents, tunnels being a key constraint as your system expands.  There are also some variations on some of the maps.  In Cairo the trains only hold four passengers rather than the six on other maps, while in Osaka you get fast moving bullet trains to help move your population about. 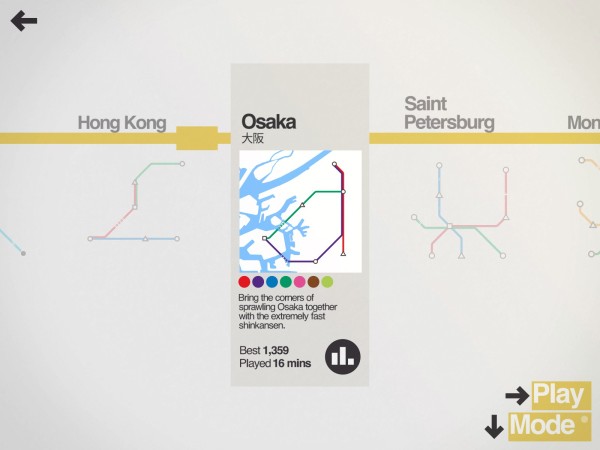 There is a hierarchy of maps and map difficulty, and to unlock the next map you have to deliver a certain number of passengers on your current map.  There is also a list of achievements for doing specific things on various maps, if you are looking for additional constraint.

The game reminds me of a software package I used back in college.  I took a class, the name of which I have long since forgotten, which was essentially holistic systems analysis.  The software, which I wish I still had, let you model processes as water flow, so you could lay out something like the DMV and see where the bottlenecks and the idle locations were.  By abstraction, you could see the flow of a system.  Mini Metro is like that, even to a real transit planner.

Anyway, the game, which is an inexpensive indy title to start with, is even cheaper with the coming of the Steam Summer Sale.  If you like this sort of system management I recommend picking it up.  There are even iOS and Android versions of the title in the respective app stores.