Daybreak is back to playing the nostalgia server card again, this time for EverQuest II.

The server was expected to go live at Noon yesterday.  However this is Daybreak, so unexpected issues are the order of the day..

The Fallen Gate server launch at Noon PT has been delayed for a bit. We'll update you as we have more information!

That got extended for a bit.

All servers are coming down for a brief maintenance to address an outstanding issue. Downtime is anticipated to be less than 90 minutes.

But by late afternoon Daybreak announced that the server was up and people could log in.

This isn’t the first progression server that Daybreak has done for EverQuest II.  Back in the summer of 2015 they brought the Stormhold server online, springing the revised Isle of Refuge on us as part of the experience.

Since then there hasn’t been too much news about the server, aside from the expansion unlock votes and its PvP server twin Deathtoll being merged into Stormhold due to a lack of interest.  But that is the nature of these sorts of servers; there is often a fuss up front, but they excitement tends to fade over time, especially when they get many expansions out.

So after two years I suppose it is about time for a new one, and so we have the Fallen Gate progression server going live today, named for the dungeon zone that is sort-of the Commonlands version of Stormhold. 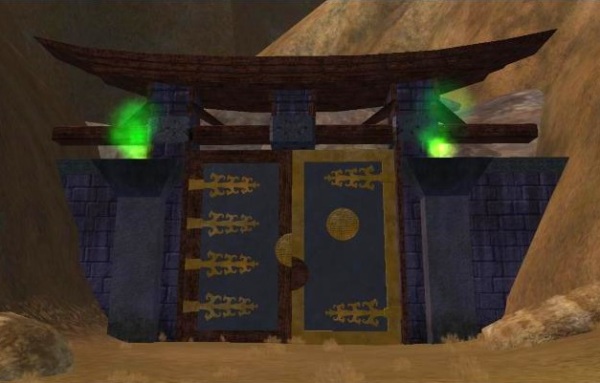 Outside Fallen Gate, which has a door that is still standing

As with the Stormhold server, you need a Daybreak All Access subscription to play.

The difference between Fallen Gate and the old Stormhold server appears to be that all races and classes will be available immediately on Fallen Gate and that expansion unlocks will come at regular 12 week intervals rather than being subject to the whims of a vote.  Voting just leads to bad feelings, especially if the vote is close.

There is also something of a theme for the server, which is focused on heritage quests.  Those quests are a nostalgic nod to the Norrath of the original EverQuest, proving that even 13 years back SOE hadn’t completely lost sight of the link the two games share.  You can earn some special achievements by completing such quests.

As usual, there are some incentives to come and play on the server, including a deplorable “mount” you can get if you reach level 10 on the server before July 11.  There is also a special Gateway to Adventure Pack you can buy in the cash shop that has a 66-slot bag, speed enhancing Journeyman’s Boots (not the ones from the heritage quest I assume), and some potions to help speed your progress in other ways.

There is an announcement page with the overview as well as a FAQ posted about the server.

My favorite item from the FAQ has to be this:

What will be available for Tradeskills?

Tradeskilling should look similar to the original EverQuest II launch.  Apprentices will not be made available until a later date.

I seriously doubt crafting will look anything at all like the interdependent tradeskill chaos that marked the launch of EverQuest II, but the thought of it amuses me.

As keen as I am on such servers being available, I do not think I will be joining in this time.  My nostalgia for the Norrath MMOs involves playing with a semi-regular group, so embarking on what would be a solo venture doesn’t have much appeal.