Over the weekend I gave in and re-upped for EverQuest II in order to potter around on the new Fallen Gate server.  That seemed to put me in league with just about every other EverQuest II player out there judging by the server status monitor. 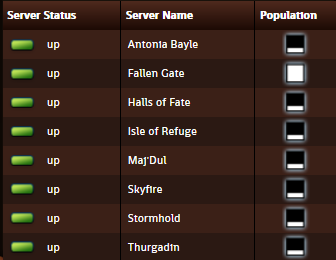 I did make one concession to my current play pattern and only opted for a single month Daybreak All Access subscription.  As I documented with Runes of Magic and Guild Wars 2, my interest seems to be wane in about three weeks.

Daybreak was happy enough to take my money and soon I was hooked up as a subscriber.  The first thing I needed to do was roll up a character on Fallen Gate.

But that meant deleting a character.

Through means shrouded by the mists of time I have managed to acquire 18 character slots on my account.  That is about half a dozen more than I think I should have.  I know I didn’t buy that many extra slots.  And, of course, all of them were full.

Fortunately a couple of the slots were taken by filler characters I rolled up back when the Stormhold server launched about two years back and never really used.  I wasn’t sure what class I wanted to play, so rolled up three right away because there was some early start prize or bonus if you did.  What the actual benefit was I have forgotten, but they got it and then never used it, so deleting them was easy.  My other characters, going back as far as November 2004, remain safe.

As usual I wasn’t sure what to roll up, so I went for my default, which is a berserker on the Qeynos side of the world.  And then I clicked the wrong thing and ended up with a guardian.  But, since I don’t think I have ever played a guardian, I ran with it.  I was soon on the boat to the Queen’s Colony on the Isle of Refuge (I got that bit right at least), a rescued bit of flotsam from the sea, and as quickly on the isle itself ready to start my new life. 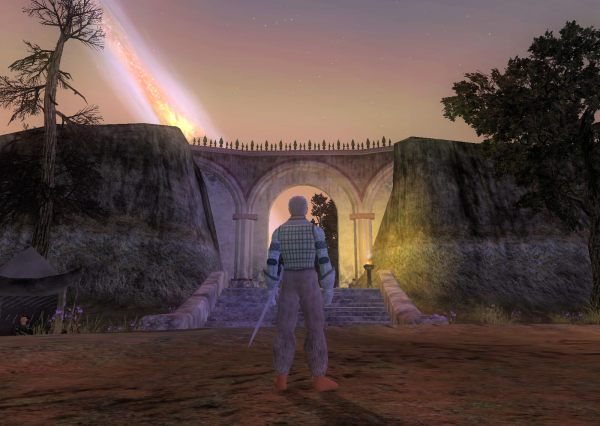 On the Isle of Refuge

The isle isn’t what it used to be back in the day.  My memory is no doubt faulty to some degree on this topic, but the quests seem different as do some of the mobs.  And the pacing of the quest line seems to be set to accommodate specific rate of advancement not present on Fallen Gate. 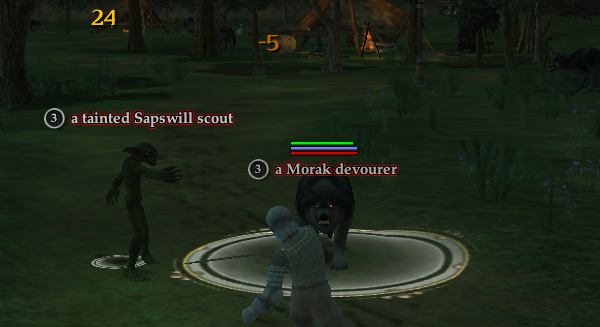 On the Fallen Gate server experience gain is supposed to be set close to 2004 pacing than what you would find on a current live server.  For the first 50 levels on a live server you out run the old content pretty quickly.  On the new, while the pacing wasn’t completely hamstrung, I did find myself picking up quests that were marked as high and higher level without leveling up myself.

Well, the isle isn’t the only option.

Back in the day I used to stick around on the Isle of Refuge with a new character until the bitter end, doing all the quests, hitting the max level allowed, banking up some additional experience so at least one more level would pop as soon as I left, and, most importantly of all, I would finish up the two isle-only collection quests.

Back in the day you could not return to the isle nor could you find the items for those collections in any other place in Norrath.  So you had to find the last item there or pay what was often an extortionary price on the market later on.

Now though the feathers and shells spawn in the other starter areas and you can go back to the isle if you feel you must.  So while the Isle of Refuge has some nostalgia value, I’d been through it a few times since its return a while back, so was ready to move on. 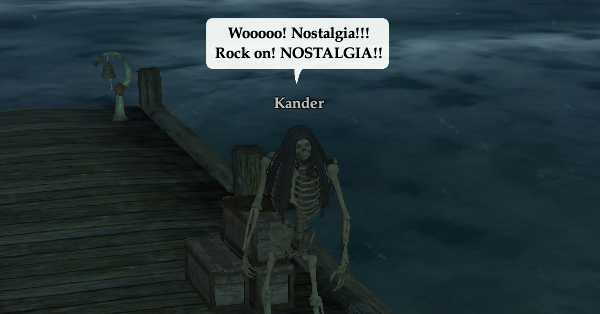 Even the NPCs on the isle were bringing up the idea of getting the hell out of there pretty early on.  Here I am hitting level 3 and being given a prompt to get out of Dodge. 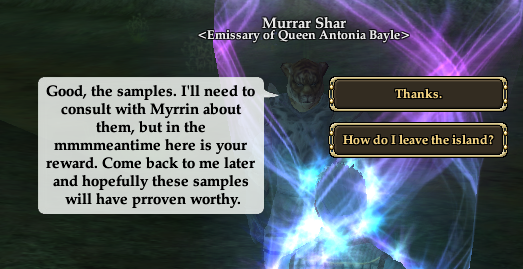 Are you still here?

That meant talking to Captain Varlos to arrange the voyage to the mainland. 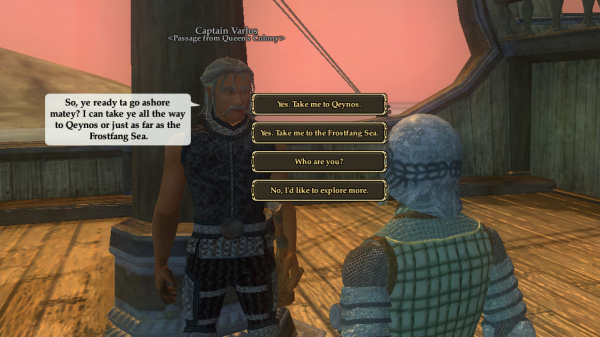 What are my options here?

From the Isle of Refuge you can head to Qeynos, which is semi-nostalgic though much changed since 2004, or the Frostfang Sea, which at this point is old enough to have some nostalgia value of its own.  The Frostfang Sea and New Halas also have a more coherent quest line and better housing when the time comes, so I chose the frozen wastes even though I had yet to find shoes.  Gear was an issue.

Alas, Captain Varlos and his ship did not survive the journey.

A quirk of the change from the Isle of Refuge to the newer starting zones is that they operate on the same assumption, that you were fished out of the sea.  So when I arrived I was telling people how orcs attacked the boat I was on.

Since Captain Varlos and his crew were nowhere to be seen I have to assume they did not survive.

I was dropped into the shallow end of the pool in the Frostfang Sea, where the first low level quests start.  This seems to be at odds with Bhagpuss’s experience, as he ended up in the deep end somehow.  I am not sure why we were in different points, but logic doesn’t always survive the journey to Norrath either.

I kept on running the quest line from there, getting bits of gear.  I did spent a bit of Daybreak Cash to buy a pair of 24 slot bags from the shop.  They were 150DC each, but I got 500DC for subscribing, so I am still ahead on that front I suppose… plus I still had another 13K in DC on my account. 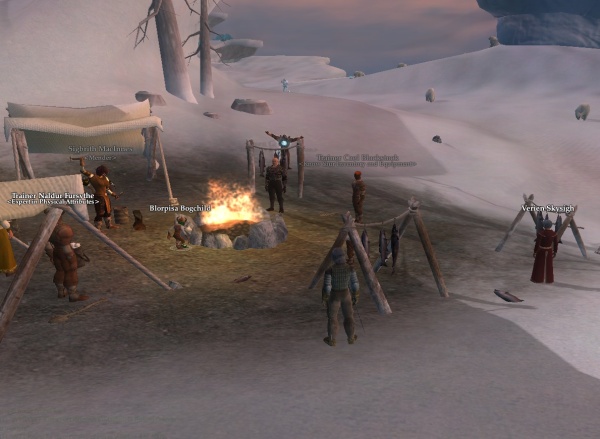 Another quest hub on the Frostfang Sea

This is the usual story, starting out, running through the initial content, getting the first bit of gear.  I suppose the next decision is what trade skill I should go with… I cannot imagine playing EQII and not crafting.  The problem is that EQII trade skills all have their merits, and by picking one I know I will feel the sting of missing out on another.  This is how alts develop.  I am leaning towards armor crafting, since you need to re-up all your gear every ten levels, or alchemy, to boost my skills through the complicated skill level process in the game.  I haven’t committed yet, but I am harvesting along the way in order to be prepared.

And then there is the bigger question.  What should I do to keep myself from tiring in three weeks and wandering off to some other short-lived adventure?

Ideally I should find a guild to join.  There is even a guild recruitment interface in the game so you can find guilds that are looking for players. However, I am horrible at picking guilds.  I tend to pick guilds where I know somebody so I have someone to chat with. I tend to be a very quiet person… ever the outsider at the party… so being in a guild of strangers ends up with me playing solo.  Of course, that isn’t all on me.  Guilds looking to simply scoop up players wholesale in order to boost levels tend to be a mass of individuals with a common tag as opposed to a team.  You can’t really be on the team if the team never gets together.

So that is my goal, to find some group or guild to join so I’ll have a reason to stick around.  I don’t mind playing solo 90% of the time, but I like to do some group content now and again.

Of course, part of getting into a guild is being something a guild is looking for, and at level 6 on a server where the great bubble of players looks to have already hit level 20 and beyond makes me feel like I am behind.  So I must grind up to join a guild so that I may be in a guild to grind… or something.  We’ll see how it goes.