On the first day of combat operations in the north we hit what was purported to be Vince Draken’s personal Sotiyo in PBD-0G.  I don’t know if that was really his or not, but it belonged to his alliance and we put it into its first reinforcement timer.

That first timer lasts 24 hours, after which we have to return to shoot the structure again to setup the second time.  You can’t blow these things up until you come back for the third time.

However, the locals were not going to give us another free shot at this Sotiyo.  We had the weekly fireside chat at 19:00, more than two and a half hours before the timer would run down to allow our second shot at the structure and The Mittani told us that Pandemic Legion and NCDot were already forming up a defense.

There was a cyno jammer up to block us from bridging in, the gate was blocked with a copious number of anchorable bubbles to hold any fleet entering the system in place, while super capitals lay in wait to destroy any incursions into the system.  PBD-0G was locked down tight, something verified by a look at the DaOpa Twitch stream.

This is a serious gate camp – screen capture from the stream

We were not going to go there.  So we went and reinforced another Sotiyo belonging to NCDot instead.

The thing is, from Hakonen, we can bridge into a range of systems and, as it turned out, NCDot had another Sotiyo in its vulnerability window in MJI3-8.

Tribute systems in jump range of Hakonen are red boxes

At 20:00 EVE Online time the call went out for fleets again.  I was online and ready as the ping went up and was able to get into the Typhoon fleet before it filled up.  Cainun was out FC.  People love flying battleships so that fleet fills up in under 30 seconds.  Other fleets were up and filled as well.

We got ourselves squared away and undocked, warping off to a titan waiting to send us on our way.  The bridge went up and we jumped in to see another lonely Sotiyo waiting for us.

Landing with the target in sight

We scooted over to get in range of the Sotiyo so we could begin shooting it.  There was a moment of panic as we started taking damage because somebody had set off the smart bomb mounted on their Typhoon.  But after that we anchored up and started shooting.

Our fleet visible under the NCDot logo

If you click on the screen shot and look near the left upright, you can see the Jackdaw fleet bridging in to cover us lest the locals decide to defend.

We adopted a very tight formation, so our fleet is one big ball with an electric blue aura about it from all of the sensor booster effects running at the same time. 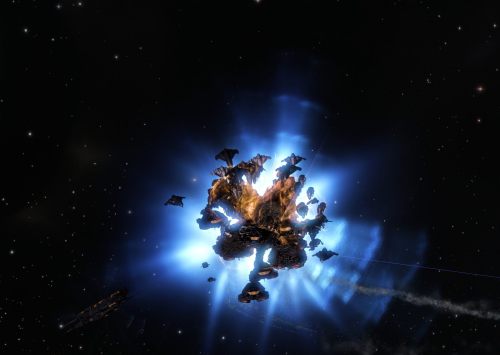 A close up of the glow around out fleet

A couple of small ships came out to see what we were up to, but no defense was mounted.  So we flew in our blob, spewing missiles and keeping close to each other.  Somehow a group of the Guardians ended up in a line with one of the Damnation boosting ships, as though the Amarr ships were being pushed out of the sphere of Minmatar battleships. 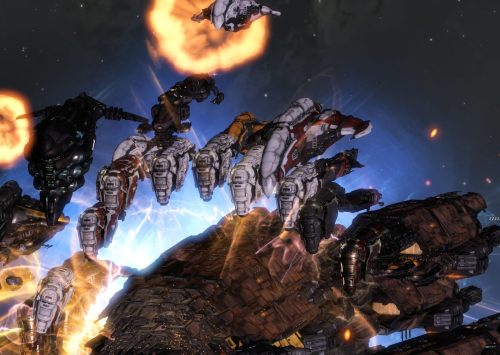 Amarr ships together in the strange glow and effects

Amarr hulls also seemed to have a pretty high amount of skin usage.  There were very few Guardians in the stock colors.

We put the Satiyo into its first reinforced state and then packed up to head home.  The way out was easy and short, the fleet not going on nearly as long as I thought it might.

All in all a demonstration of the problems of defending multiple systems when your enemy has a range of targets from which to choose.  So it looked like they would have to form up again the next day on the second Sotiyo to stop us from moving it along, at which point we could return to the first and reinforce it unless they split up or formed up enough people to cover both systems.

But then a few hours later Asher pinged this out:

So I was sitting watching the sotiyo that PL/NC sat 5 hours guarding today, while we reffed another one of their sotiyos. I was watching as it came out of reinforced and I noticed they had left system and it was still vulnerable for another hour, I guess they didn’t want to guard it for another hour. So…

The “So…” was followed by a link to this screen shot.

It looks like we used that unguarded hour to reinforce the Sotiyo in PBD-0G.  So now if they want to keep us from pushing into the next reinforcement cycle they will have to form up, guard one while it repairs, then jump to the second one and guard that while it repairs.  And they might give mind to sticking around until the vulnerability window, as if it is still open we will be back to shoot them again given the opportunity.

And so it goes from Hakonen, where we continue to setup for a long stay.

One of the citadels already deployed