The flip side of your staging system allowing you to jump into hostile space is that your enemy can easily return the favor and jump into your staging.

One of our goals is to get a Fortizar up in Hakonen to stage out of.  That would free us from a station undock that can be camped and let us set up our own market, free from people screwing with contracts and such. (The latter has happened to me.)

So a Fortizar, along with a few more Astrahus citadels, was anchored and set to come online at 02:00 UTC. 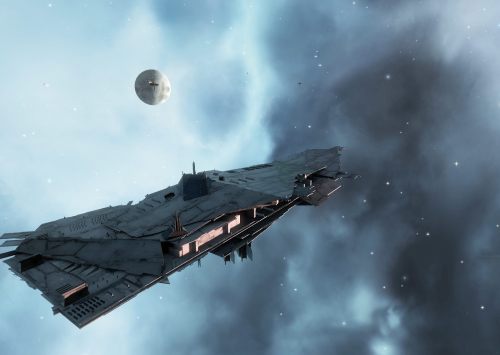 A fight was clearly expected and early pings went out advising people to have their doctrine ships ready and to be logged on by 01:30.  The enemy would not want us able to set up in the comforts of a large citadel.

This time around though I did not go with the Typhoons or the Hurricanes.  Asher had a special small fleet setup for some of the Reavers.  We would be going to battle in the lowly Gallente Atron frigate.

My Atron with the YC119 Yoiul skin

Fit with ECM burst modules, our job was to sit on a perch cloaked up and, when called for, decloak and warp into the midst of the enemy.  At that point we were to set off our over-heated ECM busts, breaking the target locks of the ships around us, and then warp off to our perches again to cloak up and wait for the next call.

We got out early and set up perches and cloaked up, waiting for things to start happening.  That gave me a bird’s eye view of the battlefield.  I saw our Typhoons and carriers undocking as well as the hostile battleships, carriers, and super carriers arriving on grid.

And then the timer ticked down to zero and the fight was on for sure, with the hostiles pausing the timer almost immediately.

The goal for our side was to keep the enemy off the Fortizar long enough for that timer to run down to zero.  At that point the Fortizar would be online, could be manned and equipped with defenses, and killing it would require the dread three cycles of attacks.

The enemy’s goal was to apply enough damage to pause the timer and then burn the structure down.  That would allow them to blow it up right then and there, no need for any return trips.

The fight itself did not go our way.  In a clash of carriers versus carriers and super carriers, the enemy was able to clear our fighters from space, leaving our carriers defanged and unable to assist the fight further.  Then the blows began to rain down on our Typhoon fleet.  Fighters chew up sub caps, so losses started to mount.  Our side was able to re-ship, but more people kept piling into the system, with the peak number in local exceeding 2,700 pilots, which also meant time dilation kicking in hard.

Local plus the expected tidi

The tidi seems a bit worse than usual, though fights in low sec space add a layer of complexity.  In null sec nobody cares who you shoot, but in low sec it has to account for your initiating aggression and modify your security status and set a suspect timer along with the usual combat timer.  (Imperium Logi King Arrendis is making the case to turn some of that off when tidi hits.)

I ended up with my client crashing twice during the fight, though I suspect that was more from memory usage than anything else.  Task Manager showed the client trying to load more and more RAM until it couldn’t address any more.  This is where having a 64-bit client would help.

Turning off some of the graphics features seemed to sate the clients need for RAM, and once I did that I was stable.  I didn’t go into full potato mode, but I turned off trails and drones and launcher effects and a couple other items.

As the battle ranged we started making our runs into the thick of things.  With each run you get a count of the number of people you aggressed.  We called these numbers out in fleet, with the range being anywhere from a dozen to over 150 hit with our ECM bursts.

That was an easy way to whore on kill mails.  You just have to get a hit on somebody with your area effect and you get counted on the list if they get killed.  It is also a handy way to burn through your security status.  Initiating aggression on low sec causes a reduction in that number for each person engaged, so I managed to go from a 4.8 security status to 1.1.

I ended up getting on a lot of kill mails, but a good portion of them were allies, this was in part because the fleets were close, but also because our side was dying in greater numbers.  We were losing a lot of Typhoons for each Machariel brought down.  With the carriers no longer of use and no supercaps of our own to call upon, after about two hours of slogging through tidi we were told to break off the fight and dock up.  The Fortizar was left to its fate and blown up shortly thereafter.

The battle report tells the tale.  While we got in some blows, we lost a lot more.

If you go down the list on our side you will see a number of people counted twice because they reshipped in system and rejoined the fight.  TEST is also counted on our side as they showed up with a Nightmare fleet to join in on the fight.

So the first shot at putting up a Fortizar failed.  Word is that the combat commanders are working on changes to the battle plan for the next run.

So far the only write ups about the battle I have seen:

Meanwhile, sitting on a perch and occasionally diving into the fray means I have some screen shots which still look pretty nice even with some of the effects turned off.

Boosts and booshes off the Fort

Atron cloaking up at a perch

Boosts and smart bombs going off

The battle before the Fort

Turning to warp off again

Abaddons flying through the battle

An Aeon in the middle 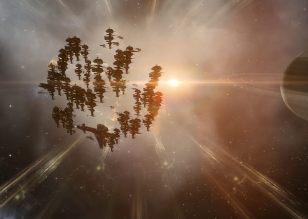 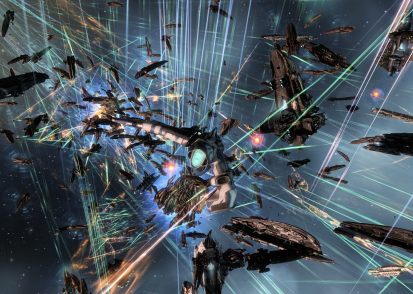 My Atron in the thick of things

In the capital section

Amongst the faxes as somebody explodes

Aligned for my attack run

The Fort still standing as I land on grid again