Player-owned starbases, the POS with its spherical shield and its central tower and its modules, have been a staple of New Eden.  They have long served as bases, manufacturing facilities, and moon mining platforms.

I didn’t really know much about the POS and its operational dynamics in my high sec days.  But once I moved to null sec back in December 2011, the POS became a regular feature of operations.  My first big op in the coalition had us forming up on a titan at one POS to be bridged out in order to shoot a hostiles POS, a tempo of events that would repeat itself many times over the years. 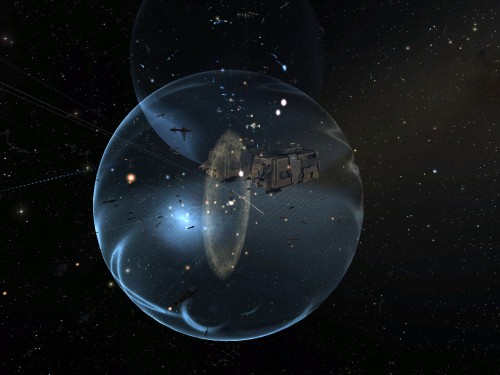 Attack on a capital building POS in 2011

However, the long serving POS is going away.  CCP has been transferring POS capabilities and bonuses to the new Upwell Consortium structures.  Come the Winter release and the introduction of drilling platforms the POS, made completely redundant, will be removed from the game.

I was thinking about this the other night in Hakonen.  We were making a sweep of moons to destroy towers left behind and it just so happened that we hit at least one tower from each empire.  Unlike citadels and the like, POS towers are like ships in that there is a flavor from each of the empires.

As we were shooting them I decided I ought to get a few last screen shots of such structures.  I will no doubt see more as the war goes on, but I might not see them all again.

They were mostly unfueled so the towers… often called “the stick” on ops… were just sitting there in space as we shot them.  Here are towers from the four empires.

I actually didn’t think about taking screen shots until after we hit the one Amarr tower on the clean up op.  However, Amarr towers seem to be the most common in New Eden, so I can make up that deficiency with screen shots from recent ops.  Amarr towers show the same design characteristics as Amarr ships, with flowing lines and an affinity for beige.

Starting to shoot an Amarr tower

An early Amarr tower with the shield up

These come up every so often, but not so much as Amarr does.  Again, the design aesthetic is that of the empire, in this case rust and raw girders.

Explosions start to brew up

The tower just before it explodes

In the standard Caldari Gray #7, the Caldari tower is less common and more boring.  But it does show damage well. 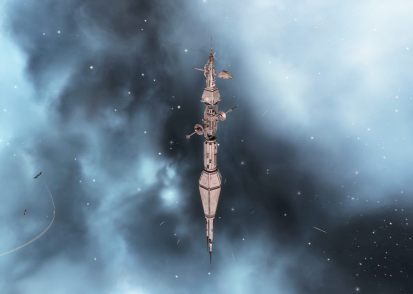 Damaged and close to destruction

Brewing up, the glow reflecting on a nearby ship

I cannot recall the last time I saw a Gallente tower, with its distinct semi-balcony top.  They are a rare find, so I was glad we got to blow up two.

Explosions start on another

A moment before it blows

And so it goes.  Blown up, but not too long before their extinction.

This post hardly captures the full variety of tower, which come in different sizes and have pirate faction versions available, not to mention the variety of modules, but it gives a flavor of what is out there in New Eden.

Soon ops will stage solely out of citadels and no longer will we be warped to a POS to get in range of a titan, trying not to bounce off the shield, waiting for the words, “Bridge up! Jump! Jump! Jump!” to be spoken over coms.

An performance recreated thousands of times