It was the second week of the fall season and I was defending my 13th place position (tied for 13 with a couple hundred other people, but still, pretty sweet), but facing the musical question, “So is this going to be another Stephen King movie bomb or what?”  This summer’s Dark Tower was pretty much in line with how I expect translations of his work to film to end up.

On Tuesday I vacillated over which movie on which to anchor my defense.  One key source was claiming that It would pass the $80 million mark over the weekend while Home Again would struggle to rake in just $6.6 million.  A second source felt that It was going to ring in more around $60-65 million while Home Again was set to hit $10 million.

And each of those ends of the spectrum demands a different anchor.  At $10 million not only would six screens of Home Again yield as much as all three days of It… and It was divided into Friday, Saturday, and Sunday screenings… but would be a shoe-in for the best price/performance of the week, giving it that $2 million per screen extra boost.

At $6.6 million though, Home Again would be a non-starter as an anchor, while a towering $81 million opening for It would make two screens of that the only possible winning baseline.

Add in my tenancy for contrariness and a weakness for Reese Witherspoon and it was a tough choice to make.

And then on Wednesday Fandango announced that they had sold about a billion advanced tickets for It and that all cleared up.  Then it was just a matter of which It options to run with.

As noted last week, since It was the only big opening and the obvious winner, FML decided to make things interesting by chopping It into three, so you could choose the Friday, Saturday, or Sunday screenings.  The list of options as prices for the week:

Price, of course, reflects the estimate box office.  But with It prepared to break all estimates, which days would be optimum?  Friday and Saturday are generally stronger than Sunday, but would Friday be worth more than two Sundays of revenue.

Eventually I decided that horror movies were really a Friday night thing.  My lineup was anchored by It Friday and It Saturday.  Then I filled up the remaining six screens with Dunkirk because I had been thinking too much on this whole thing and didn’t want to tinker any more. 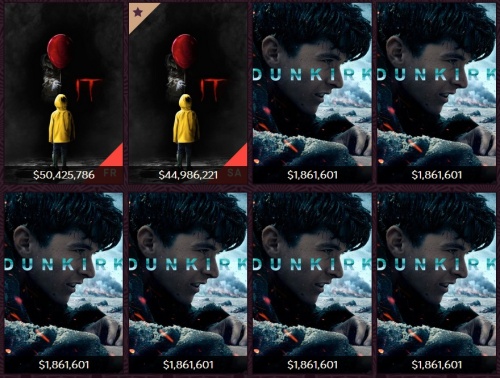 When the Saturday estimates came in, Friday was looking like a pretty good pick, with an estimated $51 million take.

Then on Sunday the estimates put Saturday at $43 million and things were less rosy for me.  A lot of people had picked two Saturday screens and a Sunday, which when the final numbers came in, turned out to be the best of the lot.  Four Sunday’s came within a hair’s breadth of being ideal.

The deciding factor was in the secondary picks, from which there were quite a few options. But the perfect pick was two Saturday screens and a Sunday screen of It, one Annabelle, two Emoji Movie, and two Nut Job 2. 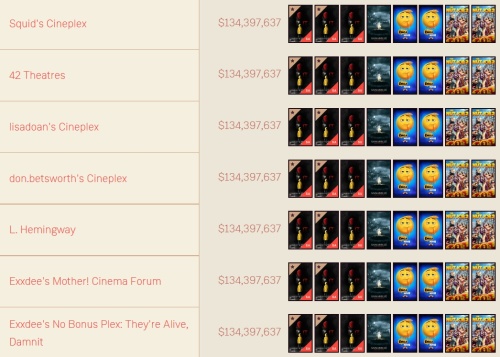 Only seven people got the perfect pick this week.  But, minus the $5 million bonus for the perfect pick, a number of people got fairly close.  A lot closer than I did.  All I can say is that I am glad I got over my Reese Witherspoon fixation quickly.  Isey of I HAS MOVIES went with my first gut Reese pick, and look where he ended up.

In writing this I became a bit stuck as to how to represent scores.  I am in three leagues with some active players (four if I count our home league), so I wasn’t sure what league to use to represent the season.

To solve this I decided to create a Meta League for fall, and combine the results from each into a single ranking.  This had the result of making my performance this week look even worse!

The three combined leagues are:

Color coded as well, just because I said I would do that somewhere.  I bet that becomes annoying enough that I stop doing it by week five.

That gives the Meta League a total of 14 players, including three who joined the TAGN league in the second week.  I’m not sure how to handle that, so I’ll just put them on the list with everybody else.

SynCaine got the overall win for the week, while I had the second to worst showing among people who picked two or more screens of It.  Four Sunday’s would have been better.  Ah well, I am still in contention in the overall standings I suppose.

I am in second place in two leagues and third place in another, which puts me in fifth place overall.  Corr and SynCaine are in pretty tight contention.  But there are still eleven weeks to go.

All of which brings us to week three, where the choices are:

After a week split into three, It gets consolidated back into a single pick, a single pick so expensive that you can only have one screen of it… one screen and not much else on the other seven.

So we’re back to the usual question of anchors.  It is clearly going to win the box office.  Do you go with that and some mixture of dregs at the bottom of the price list?  Or do you bet on some mist of American Assassin and/or Mother! that might add up to a better total across eight screens.

If It drops by 50%, a common second week situation, it will still bring in over $50 million.  And down at the bottom of the list is the Best of the Rest wild card that will be filled in with the best performing movie not on the list.  That has a tendency to become the best price/performance pick due to it favoring films that over perform estimates.

And speaking of estimates, while last week sites were practically tripping over themselves to give, and then update, box office predictions, this week it is practically crickets. My spreadsheet is useless without something on which to ground my calculations.  And so it goes.