The Warzone Extraction event has a bit more time to run but I am done running the sites.  I have “finished” the event in that I have collected all of the guaranteed rewards.

The boosters obtained at 20, 70, and 170 points were not of much value.  The cerebral accelerators though were at least useful to speed up the training of an alt or two and could be sold on the market.

The big reward at the end

There is a summary of the event over at The Nosy Gamer that reflects my own thoughts to a certain degree.

I also went in with something of a sub-optimal fit for the event, a Heavy Assault Missile armed Drake with a passive tank.  While it was able to handle the task, for the scale of the sites it was big, slow, and awkward.  I could have built up a much more efficient ship for the event, but I would have likely spent more on that than I earned on the event.

Still, it could handle things, I just had to be patient.  The only real tactical problem that came up was when a Sleeper force including two Wardens showed up.  The Wardens are the armor repping Sleepers and they will rep any ship you attack.  I had to kill them first because they could out rep my attempts to kill the frigate because the damage application issues hitting such small ships with HAMs plus their resists let a single Warden out-rep my damage, while launching drones with frigates active was mostly an easy way to lose drones.

The Wardens were big enough however that I could kill one while the other was repping it.  However, their tactical behavior consistently led me to a difficult spot.  Unlike the other ships webbing and scramming, the Wardens felt no need to hang around within my missile envelope, limited to 25km with the short range HAMs, even with my max missile skills.  So I would kill one and then damage the other just before it wandered out of range.

Then I was a bit stuck.  Being webbed I couldn’t catch it and it could keep the frigates around me alive with its reps.  So the only option was to risk drones.  The remaining Warden was well within drone range, 60km for me with skills alone, so I launched them and sent them after my repping nemesis.  Then it was a race.  As soon as the drones set on the Warden all the frigate Sleepers would drop me and go after the drones.  The drones had to kill the Warden quickly.  Fortunately the Sleepers would concentrate on a single drone which, when it started taking armor damage, I would recall.  The frigates would chase it back to me, then return to assist the Warden, and which point I could re-launch the damaged drone to rejoin the fight.

Once the Warden was down it was time to recall drones again and finish off the frigates with missiles, the go after the bigger ships, generally culminating in chasing down that one Sleeper battleship that liked to get out past 60km while I was blowing up his friends.  Even from that range he would keep neuts on me, so I never had and cap handy to use my prop mod.  On the other hand, he didn’t web me either so I could eventually catch up even going only 196 m/s. (I inevitably used all the speed boosters that dropped just to catch up a little faster.)

Again, as with any PvE event you can repeat, the first couple of times you learn the ropes, after which it becomes a matter of applying what you learned, quickly devolving to simple repetition.

The event itself had a couple of problems to my mind.

First and foremost, it was a bit of a death trap.  After running several events under the banner of The Agency that were easily soloable with any combat ship… I did Lucky Strikes in a stealth bomber a few times… putting up an event where you’re going to get scrammed, webbed, neuted, and killed in short order unless you have just the right sort of fit seems like a good way to make people mad.  If you didn’t have a passive tank or had weapons that needed capacitor, you were in trouble.

And, yes, New Eden has always been a harsh place.  But when you set a pattern of events by The Agency being fairly easy, litter sites around high sec, and encourage players to go get them with only a vague warning, then you’re going to kill a lot of player ships.

Be warned though; you might encounter some resistance while searching the wrecks! We advise you to bring some firepower.

Searching on “Eosian” over at zKillboard tells the tale, even leaving out the low and null sec players who got zapped by other players while they were neuted, webbed, and scammed.

CCP will be CCP I guess.

Speaking of which, the second issue that will be familiar to any long term player because it happens every time; the event NPCs were not visible on the overview.  Even the default “All” overview had to be fixed.  I expected this and reacted in the usual way, manually adding NPC types as they showed up.  But I am sure more than a few newer players were surprised/alarmed/blown up because of this.  It would be really cool if CCP could do something about this some day.

Finally, there is the big issue for me, which is SKINs, and the fact that I didn’t get any.

I blew up well over 200 Sleepers during the event and never got a single SKIN drop.  I knew there were some to be had.  Not only did CCP mention them in the event announcement, but the SKIN list in-game showed four Valkyrie SKINs not available in the PLEX Store; SKINs for the Merlin, Moa, Naga, and Scorpion. 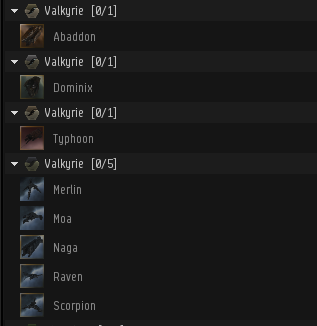 As an economic venture I could have spent my time elsewhere for better return.  As a fun activity the event wore out and became repetitive after a couple of days.  So, for the most part, I kept going to see if I could get a SKIN drop, and I never saw a one.

Fortunately others did get SKINs, as they were all up for sale in Jita.  The Merlin SKIN seemed to be the most common drop.  There were many listed on the market and I was able to grab one for under 6 million ISK.

Merlin SKIN for me

The Moa SKIN was a bit more rare, and thus more expensive, but I grabbed one of those as well.  The Naga and Scorpion SKINs however seemed very rare indeed, with only a couple on the market last I checked.  That put them beyond my SKIN splurge price.  I might have grabbed them anyway if I flew either hull regularly, but since that was not the case I let those two slide.

Anyway, so goes another in-game event.  With the coming of the Life Blood expansion, part of which is a change to The Agency event structure in an attempt to make it into something where people group up to complete them, I do wonder if CCP is going to make the error of excluding solo players from events.  We shall see with the first post-expansion event I suppose.

Addendum: I uploaded some screen shots to the post and then forgot to add them in.  A further gallery of Warzone-y things then: 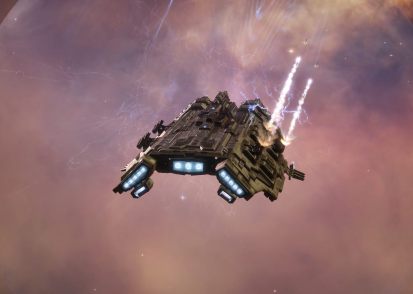 The Drake up close to another explosion

A Sleeper battleship has me