Week Seven of our Fall Fantasy Movie League is now in the rear view mirror, meaning we’re past the half way point of the 13 week season.

Way back at the beginning of week seven the picks available seemed to offer multiple possible avenues to success.

Happy Death Day, a murder mystery meets Groundhog Day film, seemed to be clear to top the box office and was priced accordingly.  Blade Runner 2049 was only in its second week, so still had potential to deliver at its lower price.  And then there was The Foreigner, a Jackie Chan vehicle that

Any of those three seemed possible anchors for a successful pick.

At its price, Happy Death Day seemed the least likely of the three to be the winning pick, even if it exceeded its estimate, which it did in spades, bringing in $26 million while only expected to hit about $20 million.

Blade Runner 2049 had been predicted to be a slow burn, a movie that wouldn’t be strong out of the gate, but which would sustain its box office over time rather than dropping 50% on the second week.  I calculated that if it could just keep the second week drop to 45% or less, it was a strong candidate.

Meanwhile The Foreigner felt a bit under priced.  At $143 a screen you could get six screens of it, plus a couple of fill ins, and if it exceeded its $10 million estimate by even a bit it would be a strong contender.

The good news, for me, is that I went with six screens of The Foreigner and two screens of American Made, which turned out to be the perfect pick of the week, shared with 415 other players, good for $106 million.

The bad news is that I picked it on my daughter’s account, my alt account, where I put the pick I didn’t take for my main account.  Wilhelm went with four screens of Blade Runner 2049, Battle of the Sexes, and three screens of American Assassin. 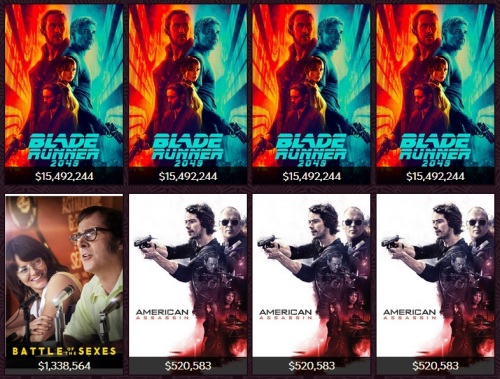 This was me letting my gut out vote my brain.  I’ve beaten myself with my alt pick three weeks out of seven now.

I was down to the wire deciding which way to jump, and in the last moment I went for Blade Runner 2049 more because I wanted it to do well than because I really believed it was going to make my goal.

And it did not make my goal.  It dropped 53% over opening week, reinforcing the suspicion in the back of my brain that perhaps the cult classic status of the original Blade Runner didn’t mean it was as popular as I thought it was.  A basic projection problem.  I liked it, people who talk about it generally like it, but that did not translate into a mass audience.  RIP my Blade Runner 2049 plan and any hopes of a sequel.

Still, my picks were not the worst in the bunch though… not to be mean… I did worry a bit when I saw Isey and I had identical picks.  The scores for the week went down like this:

Ocho and Bel both stopped picking over the last few weeks, so Liore’s league has been dropped from the list since I am the only active player there now.

Those at the top went heavy on The Foreigner, which pulled in $13 million plus was the best price/performer, giving it a $2 million boost, making it worth $15 million per screen.  That is almost as much as Blade Runner 2049.

Past that are the people who anchored on Blade Runner 2049 or Happy Death Day, which came out to be about equally poor choices in the end.  That left the overall scores as follows:

Week seven put me way at the back of the pack for the MCats league.  Catching Corr seems unlikely unless he forgets to pick.  Otherwise he generally picks as well as I do or better every week save the first.

However SynCaine and I remain neck and neck in the TAGN league, though both of us had best be wary of Pak who, despite starting a week late, is catching up to us.

And that leads us into Week Eight, which has the following options:

New on the list are Boo! 2: A Madea Halloween, which doesn’t appeal to me, but I have long understood that there is no accounting for taste, Only the Brave, a wilderness firefighting tale that seems spot on given recent events, Geostorm, a natural disaster flick that seems maybe a bit too spot on given recent events, and Same Kind of Different As Me, for which a pithy summary eludes me.

The top six movies on the list are all potentially anchors.  (Going all-in on The Foreigner would leave $160 on the table, which is never a good plan.)  I am not sure which way to jump at this point.  Boo! is too expensive relative to current estimates while nobody is going to convince me that seven screens of Blade Runner 2049 are a good idea after the current results.  So my own anchor will likely be something in between those two.