With the four day MLK holiday weekend in the US, week seven of the winter Fantasy Movie League was quite a journey.

Any week is a bit of a crap shoot when it comes to picks as you have to find the studio and industry estimates and figure out who is on the ball and who is way off base and craft your selection based on that.  But this week went above and beyond for a few reasons.

To start with, as I noted last week, the pricing was such that you had seven possible anchors out of a list of fifteen movies.  The list of options:

Then the filler movies were a bit on the pricey side, the gap between the top and bottom of the list being fairly narrow.  So you had to have some care in your pick lest you run out of budget to fill your screens.  Not that you need to fill them all.  The perfect pick the previous week had one empty.  But more than one seems dicey.

Then there were the estimates, which were all over the board.  I mean, they often vary, but this week they seemed to be more varied than usual.  I saw a gap of over $8 million for Jumanji across the sites I check.  But then it was a holiday weekend and some sites were estimating for all four days while others held to just Friday, Saturday, and Sunday, which just added to the mess.

And then there was the loss of the FML Nerd tool, everybody’s favorite lineup utility.  It was replaced by Moovee Picker, which has some upside.  It goes out and gets the weekend estimates from multiple sites, including a couple I did not know about, and puts them on the page for you and lets you weight them or ignore them completely.  But it is a bit quirky and was doing something very wrong in calculating early last week, though that was quickly resolved.  And, advanced though it is, it isn’t quite as clear and straightforward as FML Nerd yet.

Into this I waded, thinking I would eschew the old guard of movies and jump on the bandwagon with new flicks.  Surely The Post or Paddington 2 would deliver over a four day weekend.  Jumanji couldn’t hold on again, could it?

As the estimates started showing up I changed tack and started building up possible picks around an increasingly aged lineup.  As I fiddled with numbers strange selections seemed to keep coming up with as many as three empty screens.  That seemed like crazy talk to me.  It took all I had to leave one screen empty last week, three screens was asking too much.

Meanwhile the estimates seem to be fairly favorable for Star Wars and it seemed quite possible that it would be the best performer of the week, so I started messing around with that as an anchor.  Moovee Picker was telling me to go with seven screens of that and a single empty screen or to run with a screen of Jumanji, five screens of Star Wars, and two empty screens.

So I was fiddling with various options and had picked six screens of Star Wars and two screens of Pitch Perfect just to see how it looked, then got distracted and forgot to go back and change it to a “real” pick until it was already too late.  So that was that.

It didn’t turn into a bad pick.  What was odd was what turned into a good pick.  Watching the estimates come it, Jumanji quickly asserted itself as being under valued and looked to be the best performer of the week, making crazy picks like three screens of Jumanji, one screen of Coco, and one screen of Pitch Perfect 3, with three empty screens, viable candidates scoring well above my own picks.  And nobody appeared to have predicted the perfect pick.

Then the final results came in and, in a final surprise twist, The Greatest Showman surged ahead and took the best price/performance title away from Jumanji, throwing the previous perfect pick estimate out the window and turning some of those three empty screen picks back into the crazy they seemed… or at least they were no longer close to winning picks.

The perfect pick for the week turned out to be seven screens of The Greatest Showman and one screen of Pitch Perfect 3, a selection that only 70 people went with for week seven. 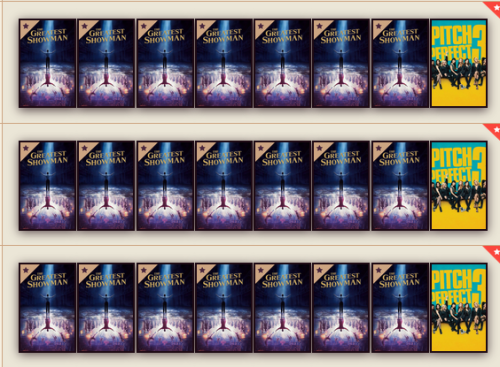 This was the second time The Greatest Showman featured in the perfect pick, as it was also the anchor of choice for week five.

Meanwhile, in the Meta League, picks were all over the map with only two people sharing the same pick.  In the MCats League I was the only one willing to touch Star Wars and ended up in third place there, while in the TAGN League I was down in fifth position, the overall Meta League scores for the week ending up as:

Except for Ben, who anchored on The Commuter, the split in the league seemed to be between those who bet on older titles and those who went with week seven’s new crop of options, the latter faring poorly as stuffed bears and blaxploitation failed to carry the day.

There were also three people who failed to pick in the TAGN league.  This was the third week for one, which I assume means they have called it quits, so Movies Movies Movies will no longer appear on the list.  The other two will soldier on until such time as they hit that threshold as well.

While Ben and Corr stayed locked in combat for the top spot, with Corr gaining no ground this week, the rest of the standings were stirred up a bit.  Pak, in tight contention with Aure and Biyondios last week for third place, did well enough to pull away from his rivals while I, hoping last week to even be in contention for third place, managed to follow Pak up the ladder a bit.

Now we are past the half way point of the season with just six weeks left to go and all the big holiday releases behind us.  Just the grim gray of January and February remain.  Will there be enough action in the box office to allow anybody besides Corr vie with Ben for first place?

Molly’s Game, Ferdinand, and The Shape of Water all fell off the list as did the Best of the Rest option.

In their place we have new on the screen 12 Strong, Den of Thieves, and Phantom Thread as well as the return of I, Tonya, which ended up being the Best of the Rest filler last week.

But in that list there are no huge stand outs for anchor.  Jumanji remains on top mostly by virtue of nothing else big having come along to cast it down.  12 Strong has Chris Hemsworth, which means we’ll have to at least watch it on video at home at some point, but I am not sure how big of a box office draw the somewhat obscure war story will be.  And after that only The Post and The Greatest Showman seem viable as anchor choices and I don’t really like either for this week.

For the first time since it opened Star Wars is no longer a viable anchor, being too cheap at this point, so it is now an expensive mid-pack filler.

As happened last week, there is no nice cheap $13 fillers if you go overboard on your anchor, so you can go with three screens of Jumanji without leaving a screen empty.  Maybe Den of Thieves will surprise, though they don’t have a big name besides 50 Cent as a draw, while Phantom Thread seems to be more art house Oscar bait than something with significant mass appeal.

And with everybody back at school or back at work, and no holidays in sight save for Valentine’s Day on the horizon, it seems like it will be a weak week at the box office overall.  A good weekend to stay home and binge on Netflix.  I know we have the first season of Outlander to finish up.