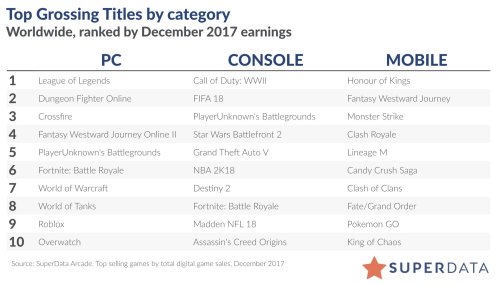 PlayerUnknown’s Battlegrounds, which was in second place on the PC chart for November, slipped down to fifth place.  Still, anybody who can say, “Made more money that WoW this month!” is probably not going to complain too loudly.  And they can always point to the console chart where PUBG made it up to third position via its release on XBox.

That move saw the Chinese trio of Dungeon Fighter Online, Crossfire, and Fantasy Westward Journey Online II return to slots 2, 3, and 4, with League of Legends undisturbed in first place yet again.  Some day it will fall.

Fortnite, having dropped all that co-op game play that was their initial pitch to jump on the Battle Royale bandwagon, jumped to sixth place, above WoW, which held on to seventh position for another month.

World of Tanks moved up to eighth, while Roblox and Overwatch returned to the bottom list.  Displaced from the PC chart were Destiny 2, Call of Duty: WWII, and Star Wars Battlefront II, which were 6, 8, and 10 on the list last month.

On the console list, as noted, PUBG arrived on XBox and vaulted into third spot, while Fortnite, which came to consoles the month before, held on to eighth position.

And on the mobile chart Pokemon Go made it back onto the list, slotting into ninth, while Candy Crush Saga held on at sixth position.

Other items from the monthly report: