I saw a news item over at Game Informer earlier this week about a rumor that Microsoft might possibly, maybe, sort of be eyeing Electronic Arts as an acquisition target.

I am no huge fan of Microsoft.  Leaving aside past bad corporate bad behavior, operating system hegemony, and the “no bloat is ever enough” aspect of Microsoft Office, which was perfected at some point in the mid 1990s, when Word 5.1a would fit on a single 1.44mb floppy disk, but which keeps getting yearly upgrades because it is a cash cow only second to Windows itself and they have to have something to sell, their sense of how things should be done has always felt off.

There was a classic video from a decade back about how Microsoft would have designed the original iPod packaging, which is hilarious in its plausibility, taking cues from actual Microsoft packaging and pushing the idea just a little bit further, that illustrates some of that.

But I never really developed any sort of hate for Microsoft, even when I was working on products for the Macintosh.  My attitude has generally been more one of exasperation in a “I see what you were trying to achieve here, but why this?” sort of way.

I don’t have any stock images I threw together to indicate how I feel about Microsoft, no dripping blood, or satanic symbols, or Latin phrases on their logo to indicate my displeasure with them.

This is not the same for Electronic Arts. 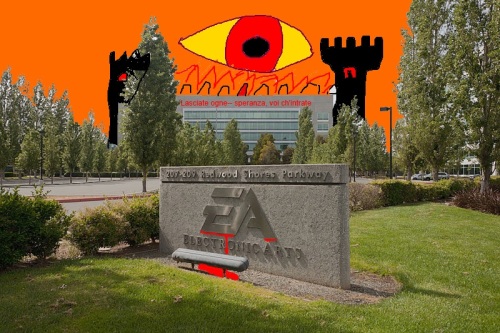 Which, of course, makes me wonder if Microsoft buying EA would necessarily be a bad thing.

They haven’t done horrible things to Minecraft since they made Notch a very rich man by buying it from him.  They also seem to be embracing a bit of the nostalgia thing with Age of Empires, even if they have locked me out of it for now.

Does not work on my device!

At least they might consolidate Origin with the Microsoft Windows Store.

Then again, Microsoft games always feel very much driven by the whole XBox side of the house.  Would that disrupt EA’s trajectory or would Microsoft leave well enough alone?  And would one or the other be preferable?  Microsoft seems to be better with their studios than EA, which has a penchant for closing them down.

And then I wonder about what more market consolidation means in a world where there are already only a few players in the market that can afford to make AAA level video games.

Overall my gut is that Microsoft is more likely to be concerned about end users that EA seems to be.  But I am not sure how much of an endorsement that really is.  How far does “better than EA” really get you?  It seems like a low bar to me.

Anyway, in the end, it will be shareholder value that dictates whether this happens as opposed to whatever gamers might think.

4 thoughts on “Would EA Be Better if Microsoft Owned Them?”