It being an even numbered year… or such is my theory… Nintendo has again decided to give Pokemon players a chance to get their hands on an array of otherwise mildly difficult to obtain legendary Pokemon.

The first up are from the Pokemon Diamond, Pearl, & Platinum generation, Palkia and Dialga.

Legendaries of the DS era

To obtain one or both of this pair you must trundle on down to your local GameStop to pick up a code to redeem with your game.

Look, here is the chart if you want the details. 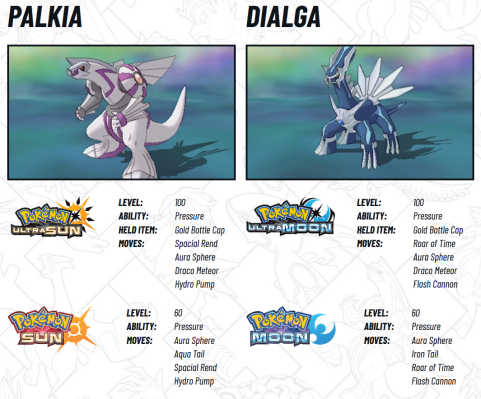 You can click on this to see it larger…

So the true OCD Pokemon fan has to have all four games… but of course they already do… in order to obtain all four legendary variations.

I will likely just get a code for my copy of Pokemon UltraMoon… mostly because through my own bit of obsessive “Gotta Catch ‘Em All!” collecting, I already have the duo sitting in Pokemon Bank.  But I wouldn’t say no to another one.

Anyway, all of this, including the steps on how to redeem your code once you obtain it from GameStop, are documented over on the Pokemon web site.

There is a time constraint.  The codes will only be available during February and must be redeemed by May 28, 2018.

Addendum: I actually picked up a card after writing this.

The Dialga and Palkia card

The cards are much bigger than the last GameStop distro, being about 4x the side by my estimation.

The reverse side of the card