The third week of our spring Fantasy Movie League has come and gone and it was definitely one of those weeks.

The lineup for the week looked like it had a few potential anchors with the usual lot of filler.

With that I spent most of my time thinking about what to anchor my lineup on.

I was not convinced Tomb Raider was going to pass Black Panther and, as I noted, Liore endorsing Love Simon in chat made me set that aside.  Then there was A Wrinkle in Time.  The safe choice seemed to be to anchor on Black Panther, with either two screens of that or one screen and something else, before working on filler.

I, however, got hooked up in a side theory from chatter that was convinced that, as a kids film, A Wrinkle in Time would have a smaller week over week drop than one might expect.  A 50% drop is pretty normal but some kids films, like Peter Rabbit, dropped off much more gradually over time.  Wrinkle dropping 50% didn’t interest me, but if it only dropped 40-45% it would not only been in play as an anchor, but as priced might contend for the best performer slot.  And I could get three screens of Wrinkle with plenty of room to back fill.

So as I fiddled with variations around Wrinkle, a monster was forming in the filler column.

Down in the filler was I Can Only Imagine, a sleeper priced with maybe a $3 million weekend box office performance in mind.  That was the Monday thinking for FML when they unlocked the lineup for our picks.

But by Wednesday the forecasts for Imagine were starting to come in way over that number.  I saw a forecast for $6.5 million first.  But one outlier forecast does not a groundswell make.  But then there were more, and the number was rising, with predictions going to $8 million then $10 million on one site I generally don’t trust.

One site going overboard you can dismiss, but when everybody is predicting high you have to figure something is going on.  It was becoming clear that Imagine was going to be the best performer, so those paying attention began to optimize for it as their filler.  But anchors still seemed to matter.  Even at $10 million plus the $2 million bonus wouldn’t replace your anchor screens.

I decided to bet on Wrinkle doing better than expected, mostly because I can convince myself of anything if I say it to myself enough times… and a couple of forecasts had it above $18 million, which just reinforced the story I was telling myself.   So I went with 3x Wrinkle and 5x Imagine.

When the screens finally locked there wasn’t much variety in MCats.  We all had Imagine as our filler.  But in the TAGN league clearly some people had not gotten the word.  They were not alone.  According to the research tab only 33% of players had Imagine in play.  But I was feeling okay about Wrinkle as an anchor as it had some play in the top 100 players list:

But 2x Black Panther, 5x Imagine, and one blank screen was the most popular pick overall.  And come the Saturday morning results, that seemed to be the winning play.  But Imagine was doing even better than the most optimistic forecast.

The Sunday update had 1x Black Panther and 7x Imagine in the perfect pick slot, with Imagine looking to take third spot in the weekend box office, passing Wrinkle which was headed for a 50% drop over the previous week.    That perfect pick held when the final numbers were released. 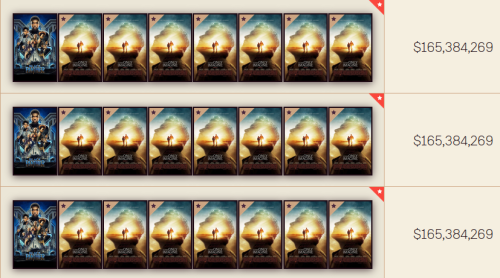 No joy for me, but Liore, who placed last in the first two weeks of the season, had the perfect pick along with 164 other FML player, making her the overall winner for week three.  I guess I can’t troll her this week.

Those of us who loaded up on as much Imagine as our anchor screens would allow did not fall too far behind, though my choice of Wrinkle set me back a ways.  But anybody who didn’t check the forecasts from the sites I listed out in the opening post of the season were in for a rude surprise if they didn’t pick Imagine.  This wasn’t one where the Thursday night preview numbers on Friday morning helped. The forecasts were trending by Wednesday. (And, in the TAGN League, mentioned in the FML Chatter forum for the league.)

The week shook up the overall standings, lifting up those who went with Imagine in their lineup.

Liore was the biggest winner of the week, rising from 21st place into 10th position.  Po held on to overall lead in the Meta League and still has a buffer, but Corr and Ben, who fought it out for first last season, closed the gap considerably.

And now week four looms with the following choices:

Gone from the choices are 7 Days in Entebbe, Annihilation, Gringo, The Hurricane Heist, and finally after so many weeks Jumanji.

Meanwhile, seeing other movies appearing on the list, do you suppose it was an accident that Tomb Raider came out close to Easter?

2 thoughts on “Spring Movie League – Some Could Not Imagine”