But what has it got in its pocketses, eh?

Abyssal pockets, of which I was somewhat dismissive back when the Into the Abyss expansion went live, calling them “…solo PvE death dungeons… in space!” in my post about the expansion launch, have turned out to be popular.  Very popular.  Far more popular than I expected.

The lure of something new, the chance to make some fast ISK while prices were high, and the challenge of fitting for and fighting this new time limited content has combined to capture the focus of New Eden.

You can watch the page on zKillboard and see all the ships getting blown up every day. (Or if you just want to see the 1 billion ISK and up deaths, there is this page.  Even some pods can make that list.)  Trillions of ISK worth of ships have been destroyed so far in Abyssal pockets and players I never expected would go for PvE content have been draw in to the challenge of them.

I am seriously waiting for the Dev Blog from CCP on how things have gone… once they get the May MER and the CSM 13 election results out.  Abyssal fever may not last, but for the moment it is everywhere.  Streamers picked it up right away, though that was not without controversy.

CCP gave some streamers from stream fleet five calm Abyssal filaments (one of each type of the lowest tier) about half a day after the Into the Abyss expansion went live in order to get people streaming the sites that night.  However a streamer who did not get in on the free filament deal got angry on Twitter with the usual complaints about favoritism and fairness that come out whenever somebody else gets something for free. (People rarely complain about this when they are the recipients.)

This tempest in a teapot led to a side debate about the sanctity of the New Eden economy as well as everybody getting a free Abyssal filament, but the streamers were on the job all the same showing off the pretty new content.

Oddly, a lot of people excited about Abyssal pockets were not people I would have pegged for it, which is to say people who actually PvP regularly.   There seems to be a cross interest in the need to fit well and the constraints and difficulty of the content.  There has been a lot of chatter about Abyssal pockets.

Of course, not everybody is happy… but then I don’t think there is a feature in any game anywhere that could make all fans happy.  And those unhappy were not exactly a surprise.  There is a slice of PvE players who both seem to hate the dull current mission content but who also insist that they won’t run any PvE content that doesn’t have a predictable reward.  You cannot answer the “what’s the ISK per hour” question with any certainty, and that makes some people angry.

And the randomness of the rewards is clearly a thing here.  I have been through sites where none of the rooms dropped any rewards and sites where all three rooms have had something for me.

And that statement is a clear indication that I have spent some time running Abyssal pockets with the crowd.

My main problem with the content is that I am a cheapskate and I don’t really want to invest in expensive ships that I am likely going to lose.  So I have taken a different tack, which has been to fly the cheapest ship I can put together on an alt and still survive.  While the market for heavy assault cruisers is booming… and prices for them keep going up as demand tries to drain the market… I have been trying to keep expenses down by sticking with T1 hulls.

My first run was with a medium blaster Thorax I had sitting on an alt.  It was already insured and fit, so I just jigged it around to be a little more tanky, grabbed some faction drones and ammo, and headed off willy nilly into an Abyssal pocket.

Thorax on the move

The Thorax wasn’t a huge mistake.  It actually made it through one calm pocket, but that was mostly on accident.  However on the second run I hit a room that was all fast frigates and I found I had brought nothing to slow them down.  So while my drones worked away my blasters couldn’t touch the ships.  The frigates burned me down before my drones could finish their work and that was that.

About to collect my insurance money

Once my Thorax was kindling for the Abyssal fire, I decided that a Caracal might be a better choice.  My alt has some missile skills.  They couldn’t do tech II heavy missiles, but they could manage meta launchers and faction missiles.  Add in a pair of faction drones, a couple of ballistic control systems and a target painter to help damage application, and then pile on resists and a shield booster and I figured it might work out, and it wasn’t even that expensive.

Caracal in the pocket

That again seemed to work out fine for a few runs.  But then I drew a room with five striking Davamiks, the Triglavian frigate, and then damage application became an issue.  Theirs was really good and mine was not.  I managed to burn one down, but they were hot on me.

Davamiks on parade… and my drones on the wrong target

I wasn’t too concerned about my drones as I was learning that I needed a shield buffer and not shield boosts.

Caracal brewing up in the pocket

I dug around looking for some buffer tank examples of Caracals and hit upon the post over at INN about various Abyssal pocket fits, which included a Navy Caracal.  Since my alt could do tech II light missile launchers, the rapid light launchers in that fit were an option as were the fury and precision missiles.  The Navy Caracal is considerably more expensive, but its price hasn’t spiked up the way the popular Gila or Ishtar has, so I thought I would give that a try.

Caracal among the rocks

The buffer tank and rapid light launchers with tech II missiles worked much better.  I hit a point where I could run any of the calm pockets with my alt.  There is, of course, a temptation to start running the next tier up.

As for loot, as noted above, it can be fairly random.  I have ended up with a few BPC drops for the new disintgrator ammo and some of the raw materials for building the new Triglavian ships and weapon systems, either of which makes a run easily profitable.  Filaments are the other main drop, and there is a market for them, but supply is pressing hard on demand, forcing down the prices.  The day after the expansion went live calm filaments were nearly 20 million ISK on the Jita market.  The next day they were under 10 million.  Now they are hovering just over a million each.

I am certainly not going to get rich running the tier 1 sites.  But I am mostly playing the tourist right now.  I’m going in to see the various scenes and take screen shots, a gallery of which you will find below.  Whatever else you want to say about Abyssal pockets, they sure are some pretty stretches of space. 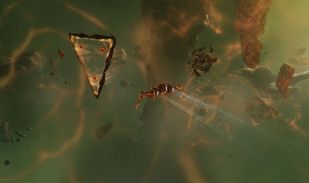 Glowing Caracal running for the gate 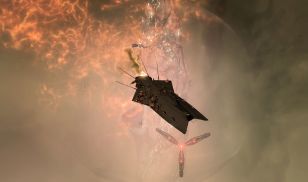 In an orange cloud

The gate is open

Caracal among the rocks

In a purple gloom

Caracal in the pocket