I think I last mentioned DragonVale about five years ago.  It was a game my daughter installed on my iPad which we played together for a bit. 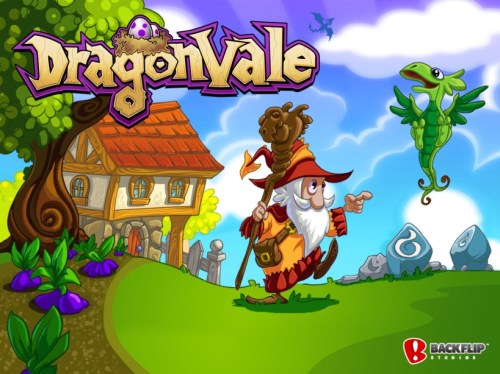 It was an innocuous free to play game somewhat in the vein of FarmVille which had you breeding dragons as opposed to growing crops.  Also, it was on the iPad so there was a lot less spamming of friends on Facebook.

So the surprise bit was that, five years later I was still playing it.  For a while it was mostly my daughter, but then I took over management of day-to-day operations she decorated the place.  Later, it was pretty much just me with my wife and daughter occasionally commenting, “Are you still playing that?”

Our “High Value”Dragon Island back in the day

Yes I was.  The game was pretty raw to start with, giving you little information about how you were doing… “doing” for me meaning collecting all the dragons.  That was my goal.  You couldn’t tell how many dragons you had or which ones you were missing.  When breeding them… and the dragons have as many types and more than Pokemon do… you had to do online research to figure out which two dragons to breed in order to get a third.  And then finding those dragons on your ever growing list was a chore, and one you had to repeat every breeding cycle.

However, I will say that Backflip, the makers of DragonVale, put in a lot of effort to make the game better and, more importantly, to make information available to the player in the game.  Now in the game you can sort by types, get breeding information, and most important of all, see a list of all the dragons available and which ones you are missing.  There is a number there, a simple number, that tells you how close you are to collecting them all.

There are other things to the game, like levels.  Levels unlock the ability to have more islands and habitats.  When I left the maximum level was 125.  You could also collect dragon eggs, which were pretty.  And they also added in the ability to collect and track decor items, which was a little much for me.

But it was the dragons that I wanted.  And slowly but surely over the years I closed in on the getting them all.  It could be a slog, since they constantly introduce new ones and every in-game event adds a few more.  Still, persistence was paying off.  I bred all the ones that could only be bred at specific times, like during a lunar or solar eclipse, or during a blue moon, or when the Olympics were in session. 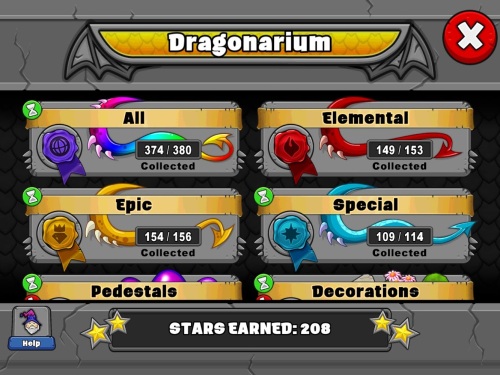 A Year ago and six dragons shy

I just wanted to get them all, then I could quit.  I was going to do what I did with Neko Atsume and get them all and walk away a winner… before they added anything else to the game. (I was done before it was even available in English.)

At three points during this year I was one dragon away, only to have something new pop up and thwart me.

The last addition was an epic dragon, which you have to perform a long series of tasks in order to unlock.  You can, of course, pay to unlock it.  And, while I have thrown some cash at DragonVale a few times over the years, I haven’t straight up bought a dragon.

Leaving out the “hollow win” aspect of it, the prices are a bit crazy.  DragonVale has a real money barrier in that to buy your way to things you have to spend more money than I am ever going to be willing to toss at a game like this.  I am good for $5 on a whim.  But $99 to get enough special coins to unlock your new epic… I’ll wait and play the game thank you.

So I carried on doing my daily task to unlock the epic.  Basically, I clicked on something which gave me a random number of special coins along with the option to get some more if I would watch a 30 second ad.  I can manage an ad, so I generally did that as well.  And so I was progressing.

Then a new special event came along.

Special events are an opportunity for the game to get players to spend some money.  It is the time when I have, in the past, been willing to part with five bucks to get enough coins to get that one last dragon.  But Backflip has been tinkering with the special event system, trying to channel people towards that money spending point.  But they have generally been pretty good about it, in the end, being about a special currency which you can then use to buy exactly what you want.

This time however there was a new twist to the event.  There were four new dragons to obtain and a special currency.  But in between they put a new mechanic.  You couldn’t just buy the dragons with the currency, you had to buy an egg which would hatch into one of the four dragons.  A level of randomness, but with a bit of OCD on your side you could earn enough currency every day to buy quite a few eggs.  Furthermore, there were double currency earning days which also allowed you to find eggs in your park if you looked.

The odds were not posted.  But after getting a lot of eggs I could tell that it wasn’t a straight up even 1 in 4 chance.  I got one of the eggs over and over.  Eventually I also got two of the other eggs, so was able to hatch three out of the four dragons.  But I was one shy.  And as we reached the last day of the I spent the last bit of the special currency I had earned in game and still did not have the final dragon.

So I looked at what my options were, and that was the table flipping moment.

At that point my only option to get what I wanted as a customer was to spend money to buy random chances.  Random chances that seemed to have a low probability of success given my past observations.

Basically, I couldn’t get there without buying a lockbox.  And at that point I said, “Fuck you,” closed the app, and deleted it.  There went a customer with a demonstrated willingness to pay now and again.

If you, as a developer, think you are going to put me in a situation where getting somewhere in your game requires me to buy a random chance, then you are not going to keep me as a customer.

4 thoughts on “Done with DragonVale”