I wanted to mention my experiences with the recent free level 100 boost that Daybreak was offering a while back.  The time has passed to get the boost… you had until June 7th, which was nearly two weeks ago at this point… but I went and did it back when the time was ripe.  And, in spending some time with the game I thought I would write about it. 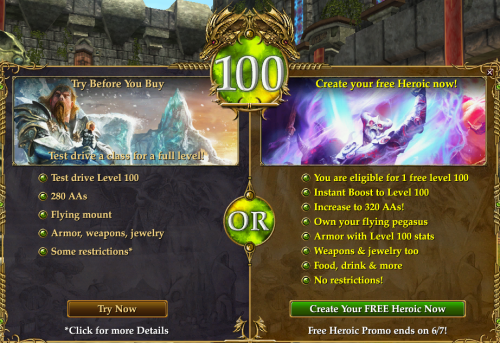 As I mentioned, I have been down the free level boost thing before and have found it… dissatisfying.  But as I find getting all the way from level 1 to the epic triple digit level heights where these well-past-a-decade old games now reside, boosting seems to be the only way I am going to see any recently created content.  You know, the “good” stuff.

The problem with boosted characters is really just context.  When you level a character up you learn the ins and outs.  You can tell when you’re doing well or when you’re doing poorly and when your equipment is really on point or letting you down.  You know how long a fight at level ought to be, what ought to be difficult and what should be a push over.

With a booster character you lack all of that.  You’re given the levels, all the skills and spells, a bag of nice equipment, and maybe a hint or two as to where to go, but then you’re on your own.

Previous times I have made characters in classes I already knew, in hopes that whatever insight might still be lingering in the back of my brain might help, or have boosted up characters I’ve already had, when that was an option.

This time around you had to make a new character and, knowing my lack of success with boosted characters in the past, I decided to try a new class.  I wasn’t going to go crazy and make a mage or anything, but I had never run much with a Shadow Knight, so I made one named Werner.

I was surprised I could get that simple of a name.  Anyway, I created him and logged in at let the game start handing me things.  Being EverQuest II, it couldn’t do this quietly or succinctly, it had to announce a whole list of skills or spells or whatever, give me a box of goodies, tell me where to go, and try to sell me the latest expansion all at once while only giving me a singl 12 slot hot bar, already full.

Welcome, let me first overwhelm you…

I opened the box to see what it had.  I was already wearing the gear, so at least I didn’t have to do that.  The box did have a fabled gear item, but I couldn’t equip that because I wasn’t a subscriber.

I then looked at the instructions as to what to do.

What to when your in Norrath

The flying bit was easy.  I’ll take any mount they hand out, but a good looking one… or at least a non-gnomish one… is preferred.

I still find it awkward that when you go to fly your angle of attack is always set by your camera angle, which means that you are trying to fly while pitched nose down into the ground because the camera… at least my camera… is always up behind me looking down so I can see things.  Of course, it is pretty much the same thing in WoW as well, but I find it endlessly annoying.

I did not, however, see a potion that would send me to Velious or the Tranquil Sea.  At least not one labeled as such.  There was one for Thalumbra however, and seeing that I didn’t have many other choices, I went with that one.

Potion to somewhere in my bags…

That seemed to work.  At least it got me to an NPC who wanted to send me on some sort of journey.  Of course, that is pretty much all of them, isn’t it?  This one wanted to send me to Neriak to track somebody down, so I obligingly clicked on his teleporting contraption and went on my way.

Neriak, however, was an annoying place.

I mean, it is annoying on a good day, and not just because of the dark elf attitude.  But this was especially annoying.  Something to do with the quest or being in Neriak or whatever seemed to require you to have subscribed to All Access.

Basically, the whole time I was in Neriak I had this window for All Access up on my screen.  Dismissing it only saw it pop right back up.  Trying to do something in the foreground seemed to offend it and it would jump on top of whatever window or dialog I had going.  It was painful enough that I considered just giving up the whole venture, but the diversion into Neriak ended up being fairly short and I was soon off for other locations… locations that did not demand All Access as part of the plan.

That’s who I am man

It was there I actually had to go up against hostile mobs.  I opened up three hot bars… though the game kept paring me down to one if I logged out and then back in… and looked at my skills to see what I, as a Death Knight… ermmm… Shadow Knight might do.

As it turned out, I think the sneeze emote would have been sufficient.

As it turned out the gear they provided was very good.  I wielded god-like power and the ability to one-shot any normal creature and two-shot any named in the vicinity.  I didn’t need to worry about which skill to use, anything with a red background seemed fine.  Hell, auto-attack seemed fine.  I was become death.

Of course, while that is the extreme end from my past experience, where the gear was flimsy enough that every fight was a struggle and dying a repeated adventure, it still wasn’t all that fun.  As somebody once opined, players don’t want the game to be hard, just hard enough that they feel like they are accomplishing something.

Still, it wasn’t all that bad.  I spent a few hours following the chain and killing stuff with a hard look.  But I never got anyplace really interesting.  Nothing grabbed me and got me invested.  In the long ago conflict between WoW and EQII, getting a player invested wasn’t one of the latter’s more glaring flaws.  Now however, WoW seemed to be able to hold me for at least a few month, invested in their story, while EQII… just doesn’t.

Of course, my main character in WoW are all ones I’ve leveled up myself over the years, not ones I have boosted.  So maybe it is more than context.

Anyway, I let things fall by the wayside after a few days and had stopped before the June 7th deadline.  Never say never and all that, but EQII just seems to have lost its edge with me.