Which is pretty much same as the old north.  At least the north as I last wrote about it, and it has been a while.  I mean, sure, some of the names and colors have changed.

Mordus Angels folded up and most of its corporations moved to other alliances in the area, many of them to Circle of Two.

Circle of Two, having suffered a stinging defeat when The Judge defected to GoonSwarm, stealing a huge amount of assets on his way out last September, lost Impass and had to spend some time on a couch in Vale of the Silent to rebuild under the protective umbrella of Pandemic Legion.

However, Circle of Two is back now, sent from the safe couch to fill in part of the hole in the front lines left by MOA’s departure, taking over Fade and part of Pure Blind.  Their leader is The gigX, who is rumored to actually be gigX, whose account was banned after threatening The Judge.  I am not sure if this is true, but even if it is not, it is somebody flaunting their defiance to CCP.

Meanwhile the Imperium SIGs and squads took a break for the first half of June, which no doubt helped CO2 get settled in.

But that has since ended, as has my own vacation time during the back half of June, and now we are back to our usual business of trying to draw out the locals to get them to fight.  The three usual methods are back in play.

The first is shooting their structures, setting timers, in the hope of getting them to come out and defend. 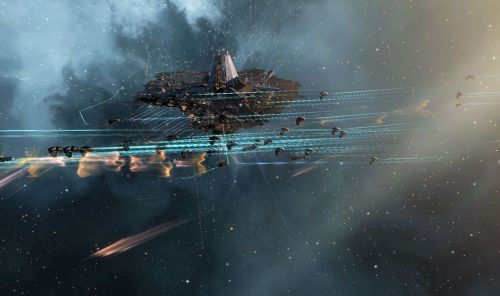 The second involves planting our own structures around their space.  If the locals come out we get the fight we’re looking for, and if they do not then we get a safe spot to tether up and repair in their space.

Another Raitaru anchored and repairing

And third there is the ongoing hunt for their ratters and miners.

A CO2 Rorqual under attack

I was back from vacation just in time to get on that kill.

This is a priority, hunting down miners and ratters in order to suppress the income of the locals.  The Imperium, as reported over at the New Eden Register, has stepped this campaign up a notch by creating the National Goons Surveillance Agency.  Under this plan people will get participation links for cloaky camping hostile systems in the north, systems being doled out to get maximum coverage, as well as bounty payouts if they call in a hot drop that ends up in a kill.

The response to this from our foes was naturally dismissive.  They questioned the economic sense of it… to which one can only ask if they read the Monthly Economic Report… and claim to have setup an always on-call coalition-wide defense fleet of capital ships ready to counter-drop any Imperium activity.

The latter could be a thing.  We do, after all, operate under what should be their capital umbrella.  However, though I haven’t been out on a ton of ops this month, I have yet to see evidence that this counter force is in place.  It certainly didn’t show up to help that Rorqual, and we had to wait out its PANIC module.  Plus, it had a cyno and fuel.  So what happened?

Yes, they did counter drop a couple days later and made a save.  That proves that they don’t really have to deply a lot in order to counter-drop.  But Rorquals still seem to be shy in the north.

Anyway, the usual tempo of operations… we’ve been at this since at least November with a few breaks… continues.  We’ll be out on the evenings USTZ to play the structures game and the cloaky campers will be on the look out for targets on which to drop, all the while waiting to see what the north does in response.