Coming and going from the game is pretty much the norm in my own personal history of Azeroth.  It was, in its way, a precedent started when I first tried the game back in early 2005.  I played a bit then went away for about a year.  Then I came back with our EverQuest II guild and it has practically been a revolving door since then.

There have, over the years been stretches, long and short, away from WoW.  Sometimes I and some friends would pop off for another game for a bit, as we did with Lord of the Rings Online or Warhammer Online.  Sometimes the game drove me out, as during the Cataclysm and Warlords of Draenor eras.

But somehow I always end up wandering back in to pick up with whatever new content Blizzard has to offer.  While I bitch about how things have changed at times, WoW does seem to be a soft landing to return to when compared to other MMORPGs.  I have been back to LOTRO and EverQuest II a few times, but the effort required to become basically knowledgeable as to what you’re doing is so steep and has changed so much over the years that it is very difficult to shake off the feeling of being completely lost unless I just start a fresh character and begin again from square one.

Not that such a venture isn’t fun.  I’ve probably run levels 1-40 or so in LOTRO more than a dozen times and have quite enjoyed it.  But mucking around in the Lone Lands for the fourteenth time doesn’t get you to Mordor.  And character boosts, something I’ve tried in both LOTRO and EQII tend to just compound the feeling of being lost, both in how to play your character and where you lay in the context of the story.  Being lost in a zone can be fun, but being lost when it comes to how to play or what your purpose is… that is decidedly unfun for me.

There is probably a whole comparative study waiting to be done about how various fantasy MMORPGs welcome lapsed users back and get them up to speed again.  I am not even sure how WoW manages to get me back on the right path.  But I now take it as read that I am going to come and go from the game as part of every expansion release and that I’ll just get by.

And so it has come to pass, one of the milestones that brings me back to Azeroth has arrived, the start of the pre-launch activities for the next expansion.  I knew the time was coming and had the Battle.net launcher… we’re back to calling it Battle.net right… up to get the pre-download going before the rush. 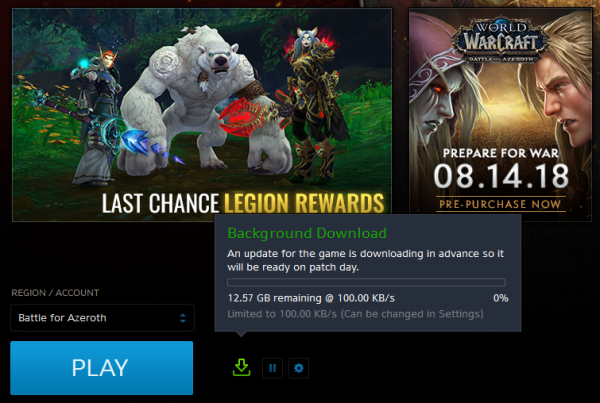 Since we were also hitting the first week of a new month I decided to resubscribe a bit early in order to get in some time earning prize tickets at Darkmoon Faire.  I still have my eye on that Darkmoon Dirigible mount.

But on logging back in I found that the pre-expansion activities were warming up.  There was a quest that popped up automatically that sent me back to Stormwind to speak to Mathias Shaw, the leader of SI:7. 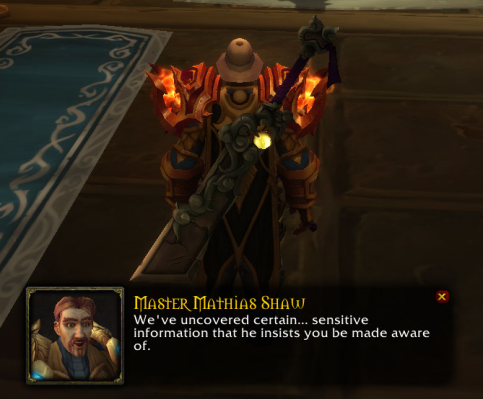 I’m still not sure how he is speaking to me…

I headed off to Stormwind where I received the update that in turn sent me off towards Silithus.

I had to think for a moment about the best way to get there.  I discarded my old school impulse to get on boat when I remembered that Stormwind got a series of portals during Cataclysm, on of which sends you straight to Uldum, which is just a zone over from Silithus at the south end of Kalimdor. 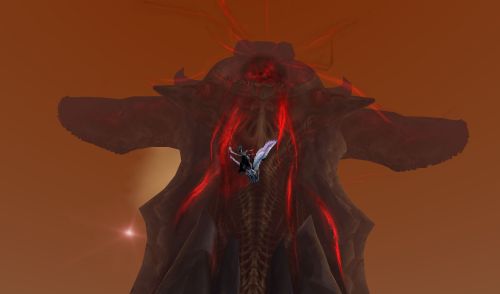 Sticking out of the ground in the center of the zone was a giant sword with a pulsating point on its hilt. 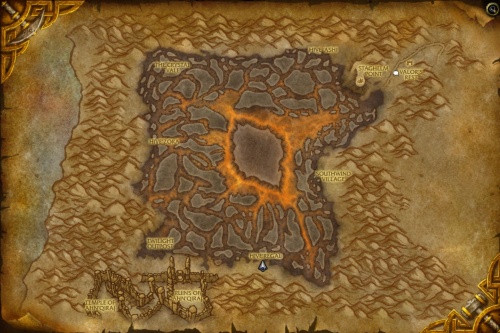 Zone map for the event

I flew on to my destination where I set about a series of quests to gather information about what was going on… through the usual method of killing things… until Khadgar finally showed up.  After being used so much over the last two expansions he is feeling a big worn out as a narrative device.

But Khadgar was mostly just a sign post this time around, sending me off in search of Mangi Bronzebeard, with whom I eventually settled in to speak with on a Stormwind airship near the offending sword. 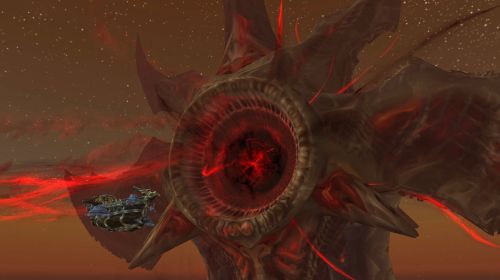 Mangi had a plan.  He wanted to contain the power of the titanic offending weapon stuck into the middle of Silithus, a zone so unpopular that I am a bit surprised anybody noticed the thing was there, with my artifact weapon. 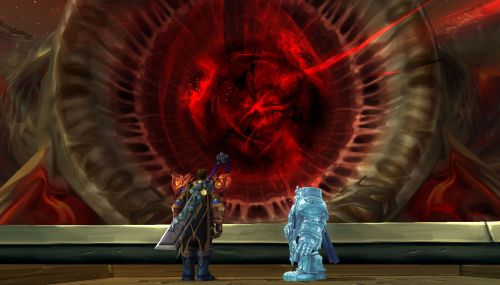 You want me to stick my sword where?

I guess I really only have a Malaysian knock-off Ashbringer.  You can tell by the faux Asian style when looking at it.  So I figured I ought to go along with the plan.  So I  went along and raised my weapon with a crowd of NPCs around me. 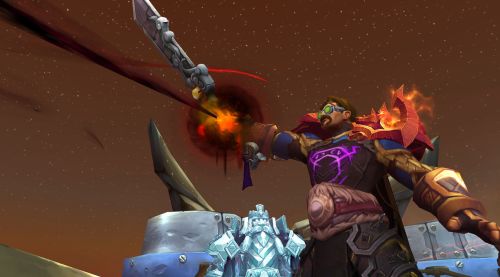 After that Mangi declared that the op was a success, that the giant dingus in the sands had been neutralized for the moment and they’d be in touch if they needed anything more from me.  Dismissed.

I was sure I much have missed something.  I logged my hunter on to run through the whole thing again, paying closer attention this time. 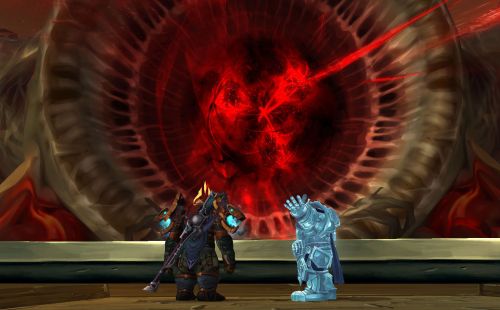 Mangi explaining how only my gun can contain this now…

I trigger the event and watched myself and the same set of NPCs try to absorb the power of the thingy. 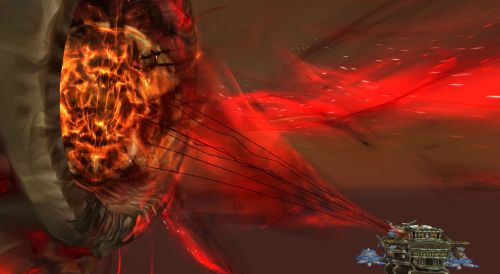 And, in watching this cut scene… one of those on the fly cut scenes that puts your character into the action… I though this time I noticed a change.  The event seemed to transform my hunter!

It turned me into a newt!

Then I realized that those were my shoulder pads, so outsized that when I turn a bit sideways they hide almost the whole of my head.  After that it was “off you go” and that was it.

What I was missing is that this event fully levels up whatever artifact weapons you have.  I didn’t notice that on Vikund, my paladin, since Asherbinger was almost there already.  But when I did the event with my mage, whose staff had barely anything unlocked, there was an accompanying achievement that clued me in.  I also did the Horde side of the event, which starts a little differently, but ends up with the same result, just on a Horde airship. 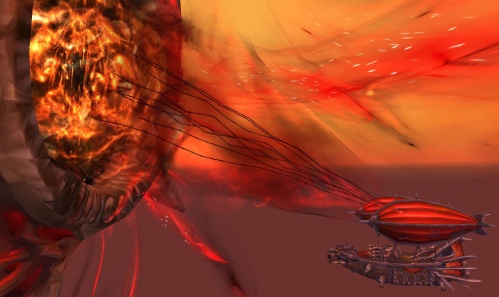 This time for the Horde

So that was it, a little bit of a lead in and/or closure as we hit the expansion transition, along with the usual catch-up mechanic that Blizz likes to throw in for the laggard crowd.  Use it quick, because that artifact weapon won’t be around after Battle for Azeroth hits.

Now I have to go and figure out what I need to do before the 8.0 update hits.  I understand that pet battle tokens and the shop are going to change.  I’d better look that up and spend my currency to upgrade whatever pets I have still waiting before the change.

And speaking of pets, at least when I was in Silithus I was able to pick up the last pet I needed in Kalimdor for the achievement.

That was the Qiraji Guardling that appears outside of AQ, but only during the summer.  So if you need one of those as well, now is the time.  You cannot get them near the wall because there is a phasing transition in the zone for the event, but if you go further in you can find them easily enough.