The Minecaft Aquatic Update finally went live this week for Java.  The update had been released for what is now the main Minecraft code base, which includes Windows 10 and all the console versions, the week before, but now everybody has it.

Minecraft under the sea

As the name of the update suggests, it was focused primarily on the under water aspects of Minecraft.  The ocean has been something of a dull place in the world of Minecraft up until now.

Yes, you could fish, farm squids, and delve into an ocean monument.  But for the most part water has been something to sail over in a boat, fill up your tunnels by surprise, and occasionally something to jump into when you’re on fire.

Now, after the update, the oceans are alive with things, fish and dolphins and sea turtles and kelp and coral and, of course, under water zombies, which are called the drowned.

Naturally I wanted to jump right into our world to see some of these new things.

The new splash screen… with water… splash… get it… yeah

Unfortunately for this desire, one of the aspects of Minecraft is that a lot of things in a chunk are only created when it is initially generated.  All of the ocean areas I had visited already would lack most of the new features from the update. I could have, of course, just started a fresh world.  But I hate to throw away all of the work on our current world.  And Minecraft worlds are effectively infinite.  I had to go find some fresh ocean area in our current world. to check out, so I consulted the map. 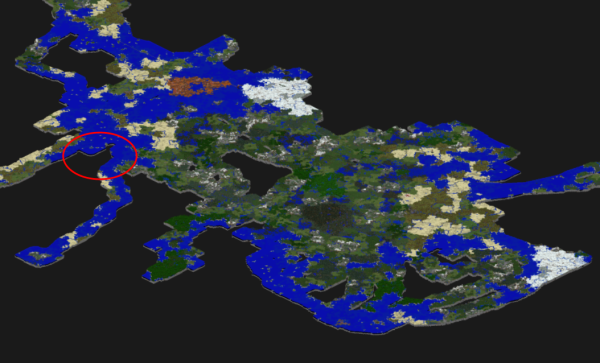 The main land mass of our world

There I found a bit of as yet generated ocean not too far from rail stop 17 on the rail loop, which I have circled in red.  I chose that spot in part because I was not too far down the rail line from there.  So I rushed there, ran over to the dock I had built, supplied with a chest full of boats, and could see changes in the water already.  Some fish were swimming about.

Fish near the surface

Encouraged I hopped into a boat and rowed westward, looking for fresh ocean.

One of the limitations of Minecraft Realms is that they set your view distance a bit closer than I would prefer.  On the other hand, when things are loading closer to you in the ocean you can spot things under water via their silhouette, which is how I saw the kelp.

A bit of undersea flora seen

I steered for that and found an island nearby to stop on so I could explore a bit.  There I found more plant life growing under the waves.

Deeper down I could see beds of kelp.

Down in the deep blue

Of course, I rowed out there without much in the way of a plan.  I certainly didn’t pack in any supplies for a long expedition.  So when darkness came, as it always does, I didn’t have shelter or a bed or anything available.  I did have a bit of stone, torches, and jack-o-lanterns, so I lit up the little island a bit in order to keep the nightly spawns away.

But there are now under water zombie spawns, the drowned which I mentioned earlier.  They started appearing around my little island, so I had to spend some time fending them off… while trying to take screen shots of them as well. 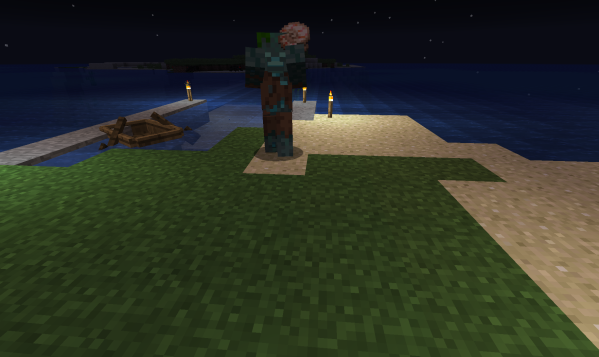 A Drowned coming over my little dock, a nautilus in hand

I was able to survive the night, and not all of my visitors were hostile.

A sea turtle comes up to the shore

When the dawn came I got back in my boat and rowed around the area a bit more.  The morning saw some more sea turtles and fish near the surface. 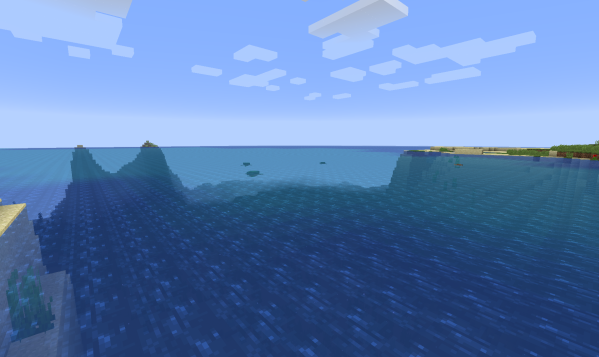 Sea turtles in the light

Then I turned around and rowed back for the mainland… and managed to get off course.  But given the long stretched of north-south rail I have laid over the last couple of years, I knew I just had to row east until I hit land, then walk east until I hit a rail line.

This was, of course, just a scouting mission.  I need to setup transportation to some as yet ungenerated sea location in order to explore this more fully.  There are, as I noted, coral and other new sea life to find as well as underwater ruins and buried treasure on the sea shores.

Buried treasure is important because those chests contain the heart of the sea, on of the items required for the new conduit blocks that let you stay under water.  Lots more to explore under the sea.