With week eight of our Summer Fantasy Movie League complete we are officially into the back half of this fourteen week run.

While we are past the $100 million launches, there are still a whole string of new films waiting to hit the screens while the early blockbusters hang on week after week. For week eight we had the following choices.

As I noted, ten out of the fifteen films on the list are sequels, which I am sure says something. And the top new choices on the list also added to the sequel count, with Mama Mia 2 expecting to to the box office, followed by The Equalizer 2. After that we were into more sequels, with Skyscraper being the only anchor choice without an antecedent… and I am sure that it being the only original story in that group says something as well.

For the Monday Hot Takes league I decided to anchor once again on The Incredibles 2 again. However, as the week wore on a bit, I decided to break my five week affair with The Incredibles 2 and hop over to Jurassic World in my lineup. For the last few weeks the two films have been incredibly… erm… very close in box office result, and with Jurassic World cheaper again this week, I made the jump.

However, with my lineup of 7x Jurassic World and 1x Sicario 2, I felt like I hadn’t spent my money as well as I might have. So I swapped out Sicario 2 and a screen of Jurassic World for Skyscraper at the top and Leave No Trace at the bottom.

That was a mistake.

Not a huge, week wrecking mistake mind you, but not my best choice. My logic was that Skyscraper, after a disappointing opening, might at least have a soft landing for its second week, coming in ahead of The Incredibles 2 and Jurassic World. No such luck however, as it ended up doing about the same as the cheaper Jurassic World and less than The Incredibles 2. Though I will say Skyscraper did about what I budgeted for. It was the dinos and Parr family that beat my expectations. 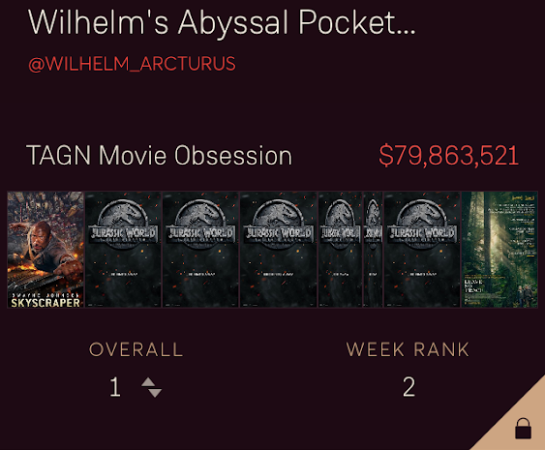 Meanwhile, Leave No Trace was a gamble on good reviews and word of mouth and a hope that it would expand into many more theaters than the 311 it was in last week. However the theater count only rose by 50 and word of mouth wasn’t enough, so it ended up in sixteenth place for the week. Basically, anything else I could have put in that slot would have been a better choice. Still, at least it wasn’t the worst performer for the money. That honor went to Unfriended 2 though Uncle Drew was close on its heels and they traded positions a couple of times.

But at least I had the dinos. Jurassic World (and The Incredibles 2) lost very few screens and were still enough of a draw to keep my lineup alive. The winner of the week though was The Equalizer 2.

As the estimates came in it looked like Mama Mia 2 was on track for about the expected amount, somewhere around $35 million, despite an inexplicably savage review by Rex Reed. I mean, there are some lukewarm words about the film over on Metacritic, and there there is the big fat zero from Rex Reed. Not an ABBA fan I guess.

The surprise of the week was Equalizer 2 which, rather than loafing behind Mama Mia 2 by $6-8 million as expected, was running neck-in-neck with its musical, eventually passing it to take the top slot for the week, a performance that also made it the best performer in leagues that give a bonus for that. Not the TAGN league for sure.

Still, its run away box office made it the optimum anchor for the week in any league. It headed up the perfect pick for the TAGN league, which ended up being 2x Equalizer 2, 1x The First Purge, 1x Sorry to Bother You, 1x Sicario 2, 3x Won’t You Be My Neighbor. 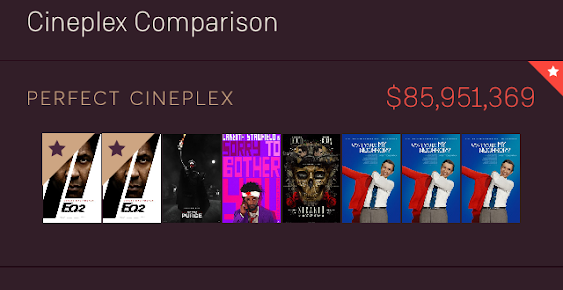 The scores for the week ended up as:

Hampsterplex was the only one to go with two screens of The Equalizer 2 as their anchor and so won the week.

After that was me and the dinos followed very closely by Corr and I HAS BAD TASTE who both went with six screens of The Incredibles 2 as their anchor.

Pak was in the running for second anchoring on three screens of Ant-Man and the Wasp.

But after that the scores starting falling off with mixtures of Hotel Transylvania 3 and Mama Mia 2 dragging people down. And then the filler started dragging people down, with Po getting the worst of it by riding on six screens of Unfriended 2. Ouch. And then there were people who didn’t pick. Is it the early cut off, the fact that it is summer, or a loss of interest that is causing us to see so many missed picks this season?

I managed to hold the top spot, tip-toeing a millimeter or two further ahead of Corr. But the big change at the top was Vigo, whose failure to pick dropped him back a few spots. At this point staying in the top five is as much a matter of picking every week as it is getting a good win, though not getting a sour lineup does help.

But there are still six weeks left to go! Still plenty of time for anybody ahead of you to screw up, starting with the week nine lineup.

This week we lose Sicario 2, Ocean’s 8, Uncle Drew, Won’t You Be My Neighbor, and Leave No Trace off the end of the list.

Dominating the list this week is the return of Tom Cruise to his Ethan Hunt role in Mission: Impossible – Fallout .  While not expected to come close to the $100 million mark with its opening, it is tracking for a good $60 million, which is nothing to sneeze at in the middle summer market.  And it is really the last BIG opening this summer.  But if you anchor on it you’re off to picking inexpensive filler.

Also at the upper end up the list is Teen Titans GO! to the Movies.  When we saw the trailer for this I said to my daughter, “You used to watch that.” which got an icy response of, “I used to watch Teen Titans, NOT Teen Titans Go!”  Pardon my ignorance.   While it is a youth focused movie opening in the summer market, it only comes up in fifth place, tracking for somewhere around $15 million.

Further down the list is Blindspotting, a crime thriller set in Oakland, which has good press but opened on only 14 screens last week, so needs to expand quite a bit to contend this week.

Then there is Eighth Grade, which follows a girl during his last week in middle school before moving on to high school.  It has been out for two weeks already, has good press, and did better than Blindspotting last week on 33 screens.  Again, its performance this week depends largely on how much it expands.

And finally there is the return of Three Identical Strangers to the list.  Had this been on the list last week it would have beat Won’t You Be My Neighbor and Leave No Trace.  Coming into its fifth week, I assume it is expected to expand onto more screens to justify its return over a title like Sicario 2.

Given those choices my Monday Hot Takes league picks were 1x Mission: Impossible, 2x Jurassic World, and 5x Sorry to Bother You.  My thought is that a film like Mission: Impossible is landing on fertile ground this week with, with only The Equalizer 2 offering up an alternative action option, so it could very well.  Still, The Equalizer 2 is cheap, so Tom Cruise needs to suppress the opposition as well as exceed expectations to be worthwhile.

We shall see if I hold to that position all the way to the Thursday morning lock time.

And, speaking of lock time, the league locks less than 24 hours after this post, so go make your picks now!