The event started warming up at about 17:00 UTC, which was 10am local time for me, so I was at work.  But I could watch coms on my phone and follow the progress as events unfolded.

The source of the conflict was a Keepstar timer, so the trend of the war continues.  NCDot dropped a Keepstar in Pure Blind in X47L-Q to support its allies facing the Imperium.  That system put it in range to support the Circle of Two Keepstar in DW-2TI in Fade.  That also put the CO2 Keepstar between it and the Imperium staging in Cloud Ring.

It was, however, quite close to NPC null sec in Pure Blind, where Imperium SIGs and squads have been active since November of last year, and its position also put it astride the route to Tribute, NCDot’s home.

The fight itself was over the armor timer for the Keepstar which, depending on who is speaking, either doesn’t really matter or is the most important timer.

As I have noted before, to kill an Upwell structure like a Keepstar there are three fights that need to happen.  The shield attack, the armor timer, and the structure timer.  Successfully breaking through the citadel’s shields starts things off and can be done at any time.  The following two fights come at specific times.

The argument against the importance of the armor timer rests on the obvious; the Keepstar doesn’t die if the defender loses.  Very simple.

The argument for the importance rests on the idea that if the defender loses the final timer, they are stuck on grid, unable to tether or dock, thus left to the dubious mercy of the victorious foe.  You can lose the armor timer and still find safety.  Losing the final timer means a need to find an exit.

Either way, it wasn’t clear that the fight was going to happen.  Both sides were ramping up for it, however there was a DDoS attack on the game yesterday morning that was causing people to get dropped and leaving them unable to log on.  This rather ironically occurred about when CCP posted a Dev Blog about issues with the game earlier this year.

We are currently working to stabilize the Tranquility cluster and restore connectivity for all those affected after a severe DDoS attack.

Sincerest apologies for the downtime and connectivity issues.

However, the CCP team was able to get that in hand before the timer hit and I saw the pings go out for fleets.  Ships were forming up and the battle was on.  Cynos went up and ships were bridged in, the system having been captured by NCDot too recently for them to be able to put up a cyno jammer.

A couple of people started live blogging things.  NER had a thread up on Reddit, while INN put one up on their site.  From those I was able to watch things unfold from work.  It looked like both sides were willing to drop titans on the field and battle soon became a measure of who was killing the most of the big ships.

Things seemed to be going in favor of the defenders on the titan count.  While the attackers managed to kill a Vanquisher, a very expensive faction titan, overall the count was going against the Imperium by almost 2 to 1.

Some of the Imperium leadership was on record before the battle saying that we would trade two of our titans for an enemy titan and feel we’d come out on top due to the economic power of Delve.

Of course, it is one thing to say that and another to see it actually happening, especially when our own faction titan landed on the chopping block.  The first Molok to die in the game went down during the fight.

As I finished up with work I went to try and slip into the system to see what was going on.  By then the live blogs were starting to taper off as those who needed to get up in the morning wandered off.

I managed to get into X47L-Q in a Purifier stealth bomber, joining nearly 4,000 other capsuleers as I crossed slowly into the system.

I am in the system, almost…

I was even able to get on grid with the Keepstar but I hadn’t reduced the video settings to put myself in “potato mode” and the client objected to this strenuously, closing down repeatedly until I gave up and went to have dinner.  At some point my ship was in system long enough to get blown up, so op success I guess.  But it seemed like I might just be reading about this battle on Reddit.

Later in the evening though, when the timer had been won by the Imperium, thus setting up a return match, and the EUTZ players were starting to fade, the call went out for USTZ capital pilots to get online an in various fleets to drop on targets of opportunity.

I won a Naglfar as a prize for the Reavers race we had way back in December and it has been sitting in a station waiting for an opportunity like this ever since. 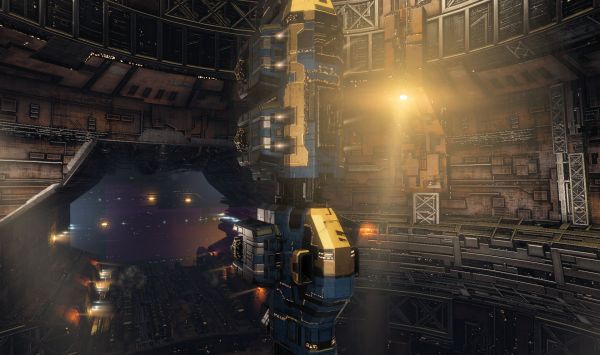 Nag in the hangar… and of course I bought a SKIN for it!

I got in fleet and made sure I was ready to go.  My hope was to be able to drop on a titan.  And a titan came up as the first target, but I did not “x up” in time to be called for that drop.  But another target was said to be coming up shortly, so I undocked so as to be ready to go.

On the undock about to get bumped

I did remember to set my graphics to “potato mode.”   I never do that, and I tend to pay for it in big fights, but I like to see pretty pictures dammit.  You must suffer for beauty!  This time though I wanted to get in and stay in if I had the chance.  So I dialed everything down.  Gone were the shiny, high res textures, but we were called and told a cyno would be up for us in a moment, so I was ready to go.

Then it was up and we jumped, the tunnel speeding along until we started to hit the X47L-Q server, at which point the animation, like everything else, slowed down to 10% speed.  That took a while, but people eventually started to land.  Our target was a Nyx that had disconnected and had been caught coming back into the game.

Then I had to do all the things, get myself in siege mode, target the Nyx, put my heavy warp disruptor on the target because I was close enough and wanted to help hold him in place, and none of the buttons were responding, which is often the norm in these fights.  Eventually siege went greed, and the warp disruptor went live, but I managed to toggle my guns on then back off, so I was set to unleash just one volley.  But that was the minimum I needed to at least get in the fight.

I had to tinker with things.  I had started the guns up again when I noticed that I had loaded long range ammo.  That made sense because you never know where you’ll drop, but I was close enough to want to swap to shorter range, higher damage ammo.  That meant cycling the guns off again, going through the reload cycle at 10% tidi, then getting the guns going again.  I made it happen, but all that fooling around probably explains my low position on the damage list for the kill mail.

The wreck of the Nyx

Things were going well enough that I started bumping up my graphic settings a bit, so that wreck is not full potato mode.  Tidi even jumped up to 14% at one point, before heading back down to 10%, indicating that the server wasn’t as swamped as it was earlier in the day.  But there were only about 2,600 people in system and the defenders were attempting to de-aggress and dock up or jump out.

Then we had to wait for the siege modules to cycle down.  A dreadnought in siege does a lot more damage, but cannot move or jump out, so you’re stuck there until it is done.  I had three minutes left on my timer, which meant 30 minutes real time until I could do something.  But coms were enough to keep me entertained.

Leadership was quite excited.

As I mentioned, in the first half of the fight the Imperium was losing two titans for every one we blew up.  But as the fight went on we kept piling in more pilots at every opportunity while the defenders began to try to escape once the fate of the Keepstar timer was set.  The aggressiveness of the Imperium set the titan kill totals back towards an even balance, with the end result being something around 29 titans lost on each side [final score seems to be defenders lost 29, attackers lost 27 in the system], which is the second largest loss of titans in a single battle, behind only B-R5RB.  (Infographic about that battle here.) I haven’t seen a final count, and zKillboard is still a bit wonky this morning, but to win the objective and trade titans one for one is a big op success for us.

The final titan kill for the Imperium was one that got bumped off of tether by Jay Amazingness then quickly killed by mass doomsday fire.

After that it was clean up.  There were a few more smaller targets of opportunity, but it was mostly about getting people out of the system.  Our group got out of siege and jumped to the extraction cyno lit for us.  There were efforts to communicate with people who seemed to have gone AFK on grid with the Keepstar, including trying to find people who might know them personally to call them and get them to jump out.  Most ships seemed to find their way home, but there were still plenty of people who got dropped and called it a night.  The defenders set up a bubble camp to catch people logging in this morning.

As with the bubble camp at UALX-3, there are lots of ships and fighters waiting in that bubble. 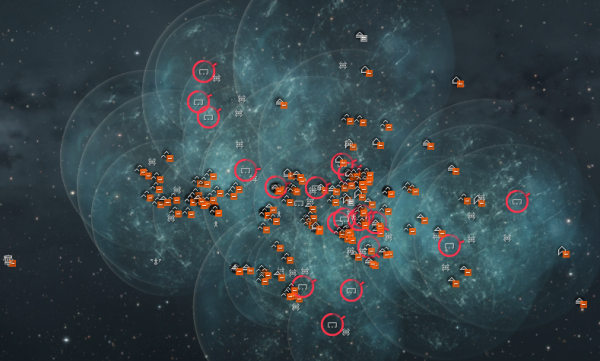 This is waiting for you

As I said, final numbers are not up yet.  I have heard a few estimates, but nothing concrete yet.  There is a nice graph estimating the ISK war up on Reddit.  And DOTLAN confirms that a lot of stuff died in the system yesterday and early today.

I’ll link any final result posts at the bottom when they show up.

And, of course, this was only the armor timer.  The final fight has yet to come.

Timer is counting down

So at about the same time next Wednesday everybody can long in and do it all again, this time for keeps.

Since I missed out on the main fight, I at least have some links to Imgur galleries of other people’s screen shots, if you are interested.

Other reports on this fight: