It has been a while since we have had a new Rooks and Kings video, the last one being Message in a Bottle that saw them moving to the Serenity, the server that hosts the mainland China version of EVE Online. (There is a timeline of their videos on the Rooks and Kings site.)

There wars were fought, with battles between supercaps and titans of the like that we are only beginning to experience in the west on the Tranquility server.  The wars left the Pan-Intergalactic Business Community alliance, or PIBC, the dominant power in null sec, able to rule in a way that no western alliance has, as the influence maps make clear. 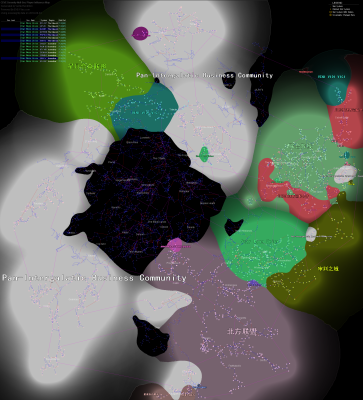 This led directly to the migration of players from the Serenity server in China to the Tranquility server in the UK that serves the rest of the world.  This is the genesis of alliances like Fraternity and Ranger Regiment of the Winter Coalition as well as the P.L.A. corp in GSF.

The new Rooks and Kings documentary, First Light on the Fifth Day, follows the ascension of PIBC, the exodus of its foes, the battle for who represents China, and how the two servers still interconnect.

Available in 5K video, you can click through to watch it in high def on YouTube directly.

Rooks and Kings sent out an email blast to a variety of EVE Online related sites on Friday night, so you will like see this video all over.  Still worth reposting here for me to have my own context down the road.

Addendum: There is now an interview with Lord Maldoror over at INN.