The north has been simmering since last week’s titan destroying battle in X47L-Q.  That fight was just the penultimate round for the NCDot Keepstar in the system.  The armor timer was beaten, leaving open to opportunity to destroy the giant citadel today.

Preparations for what might be the final battle over the station have carried on since.  I mentioned an operation that we ran on Saturday to cover the deployment of a Fortizar in X47L-Q on the same grid as the Keepstar.  That set a three day timer before it would be set. 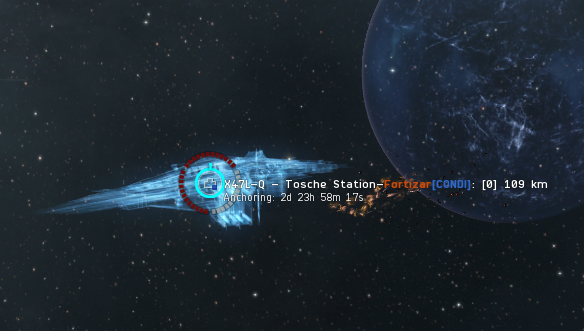 The wait for anchoring begins

The deployment timer for that came due last night and we formed up to cover it again, this time to see that it went online.  Two subcap fleets were called up, a Baltec fleet under Thomas Lear and a Cerberus fleet under Asher Elias.  I already had a Scimitar to fly logi for Cerbs from a fleet the night before, also to cover a citadel coming online, so I went with Asher’s fleet. 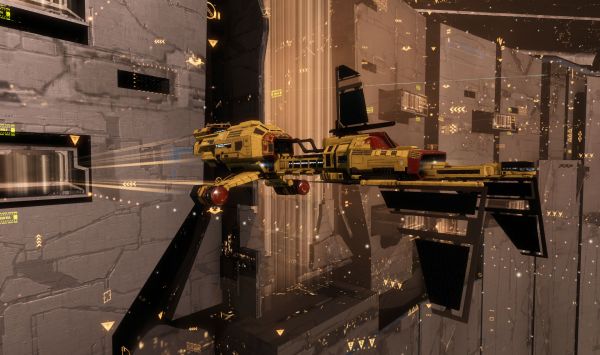 Both subcap fleets were bridged to a mid-point system early to wait on citadel until the timer hit.  The subcap fleets hung there with the capital fleet that was also called up.  We were serious about getting this Fortizar online, so there were titans, super carriers, and faxes out for the fleet.

I had an alt in X47L-Q cloaked up on grid with the Keepstar and our Fortizar in order to see what was going on.  Watching the system, it did not seem to be as active as one might expect if a battle were expected.  There were fewer than 150 people in the system, many of them Imperium pilots.  We had plenty of eyes on things.

The count in the system went up as the timer transition moved closer.  First Black Legion arrived with a fleet of Muninns led by Elo Knight, followed by NCDot and their own Muninn fleet.  Local moved above the 500 mark, and then the Fortizar anchored and began its 15 minute repair cycle. 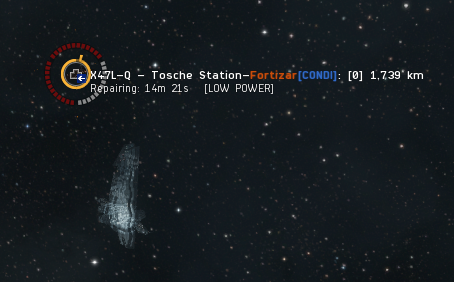 The locals put their Munnins in range of the Fortizar and opened up, pausing the timer easily enough. 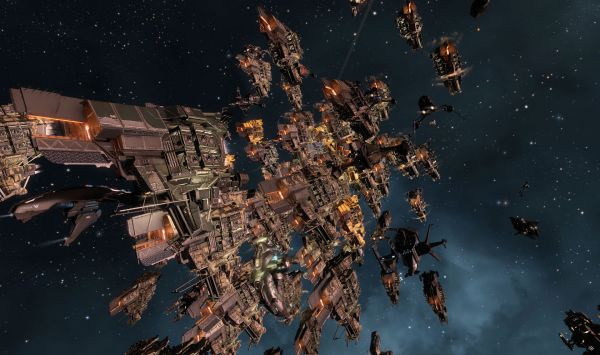 But the cyno for us went up shortly and we jumped in, docked up, then undocked to get around the tether delay, the headed on out towards the Munnins.  The Baltecs were there as well, along with a bomber fleet under Dabigredboat and the capitals, so the Munnins withdrew after a short clash.  We moved back to the Fortizar to tether up and keep an eye on things. 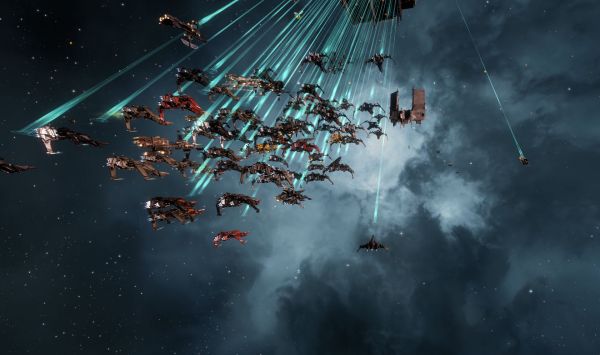 Hanging on tether under the Fort, Keepstar in sight

Asher told us then that Zungen from Black Ops had decided to try and start anchoring another Fortizar, no doubt hoping that all eyes would remain locked on X47L-Q.  However the locals could see that we were serious, with caps on field, something they didn’t seem keen to counter at the moment, so the Black Legion fleet broke off and went to kill Zungen’s Fortizar.

At some point, as we hung on tether, a Minokawa force auxiliary of ours ended up on the Keepstar.  Asher had us align and we warped in to try and shepherd it to safety, but we arrived just in time for the Keepstar doomsday to hit. 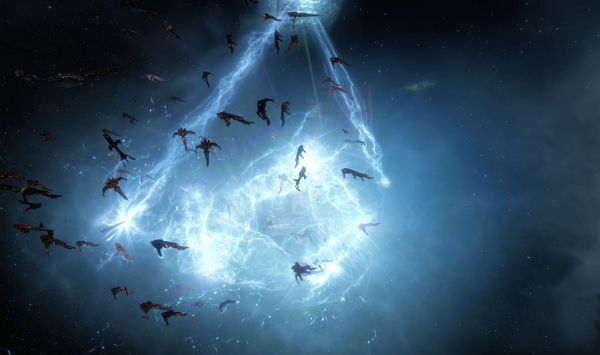 We lost a couple of ships in the fleet, but the brunt fell on the Minokawa, which began to come apart.

A subcap explodes as the Minokawa begins to fail

A few of the locals in the NCDot Muninn fleet, which stayed behind, got in range to get on the kill.  We were able to return the favor by popping some of them, but the Minokawa exploded all the same, the Keepstar having done 99% of the work.

During that exchange the hostiles managed to headshot Asher, blowing up his Phantasm, despite logi getting reps on him right away.  We went to a backup anchor, The Pink Pansy, and shot a few more hostiles before everybody withdrew to their citadels to tether up.  Asher was able to reship into a Sleipnir and carried on leading the fleet from that.

Meanwhile, a few systems over, Zungen’s Fortizar was destroyed, so the locals got their success for the night.  Well, they got the Fortizar and slaughtered a host of bombers that flew over to try and defend the citadel.

When the repair timer on the Fortizar in X47L-Q finished up and the citadel was secure, the subcaps headed out to see if we could catch the hostiles from the other fight. 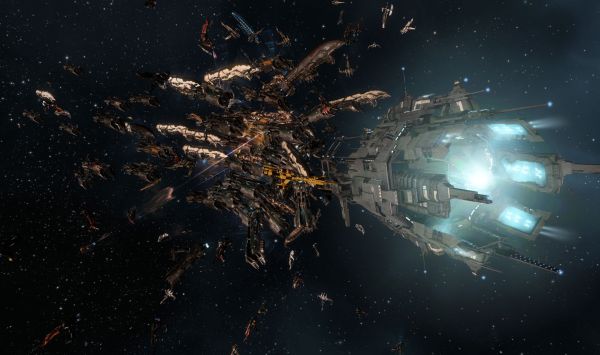 We ended up behind them, catching up with them on the gate in O-N8XZ, where a few shots were fired and a couple of ships exploded, but no decisive clash took place.

When that had peter we headed to one of our citadels to sit with the capitals while their jump timer cleared. 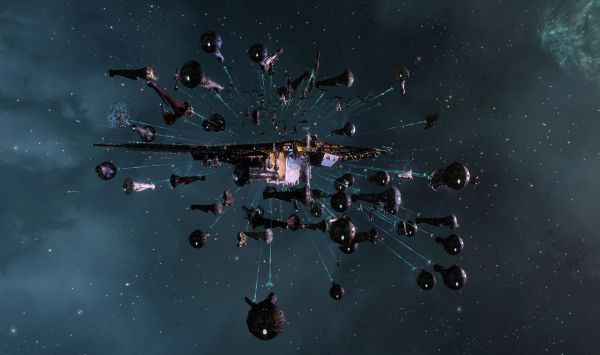 Sitting on another Fortizar, waiting to go home

When the capitals were ready to go they began jumping back to our Keepstar in 6RCQ-V.  We were bridged back as well and docked up.  The operation was over, lasting a little over 100 minutes from form up to dismissal.

Operationally, we accomplished what we set out to do.  We have a Fortizar on grid for the Keepstar final timer.  ISK-wise, we would have done very well had the second Fortizar not been dropped and lost along with so many bombers.  That cost us the ISK war according to the battle report I put together. 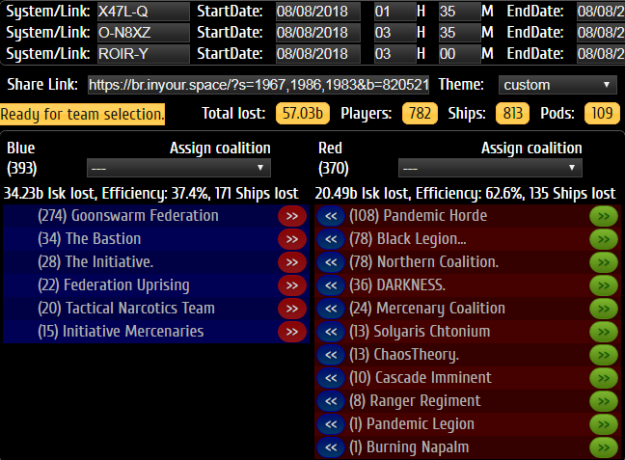 The numbers of players on the battle report are comparable, and the ISK war was in our favor in X47L-Q, even with the Minokawa loss.  But roping in all of the events across three systems seems like a more fair assessment of the evening.

All of which leaves us waiting for today’s events.  Before this post goes live… the joys of scheduled posts… fleets will have formed up and moved into the jump range or on grid in anticipation of the timer on the Keepstar running down.  A fight seems almost certain as there was a report at NER on Monday that Pandemic Legion, Pandemic Horde, and NCDot were moving capital ships away from the southern front and their war with TEST and towards the north and the coming Keepstar contest.

Before I am likely to even have considered lunch, the fight will have begun as the 30 minute repair timer begins.  Time dilation will likely keep any fight that occurs on the field long enough for me to get home from work and peek in… my alt is logged off in the system… and maybe even join a reinforcement fleet.

The question is really whether or not this will be another titan bloodbath.  Both sides no doubt learned from the last fight and nothing has changed since then, so it will be interesting to see how the two sides adapt to the situation.

Anyway, tomorrow’s post will be, at a minimum, the results of the fight.  I cannot cover the drama over this Keepstar and then not report the final result.