Our summer Fantasy Movie League is coming to a close soon as we are now through week thirteen, the penultimate week of the season.

I like the word “penultimate” and will use it every chance I get.

For week thirteen we had the following choices for our lineups.

Crazy Rich Asians was still slated to take the top spot in its second week, but second place was expected to go to Happytime Murders, with The Meg coming in third.

I was not enthusiastic at all for Happytime Murders however.  As I said in league chatter, to me it seemed like a picture in search of an audience.  The clips and trailers, along with the R rating, were pushing it as an adult feature, so you couldn’t expect too many kids going to see it.

But even with Melissa McCarthy at the helm it looked like a homage to Who Framed Roger Rabbit, a film with a PG rating back in the 80s, done with muppets rather than animation.  Or puppets rather, as muppets are a registered trademark of the Disney corporation.  The film was clearly trying to ride on that association however, along with children’s television with the tag line “No Sesame, All Street,” for which they were sued by the Children’s Television Workshop.

So I was staying away from that.  I was also down on A.X.L. which, despite its low threshold for success based on its FML pricing, seemed trite and uninspired.

At the beginning of the week I was keen on CRA and my Monday Hot Takes League saw me anchor on two screens of that along with some filler that was mostly picked to spend my budget and avoid A.X.L.

As the week went on though, I began to feel like CRA wasn’t going to do it, that to be worth that price it would have to have an almost unprecedentedly small drop in earnings week over week as to be unlikely.

I decided that since I could get three screens of The Meg for less than the price of two screens of CRA that I would go with sharks for my anchor.  So I ended up with 3x The Meg, 1x Mile 22, 2x BlackKklansman, and 2x Hotel Transylvania for the TAGN league pick. 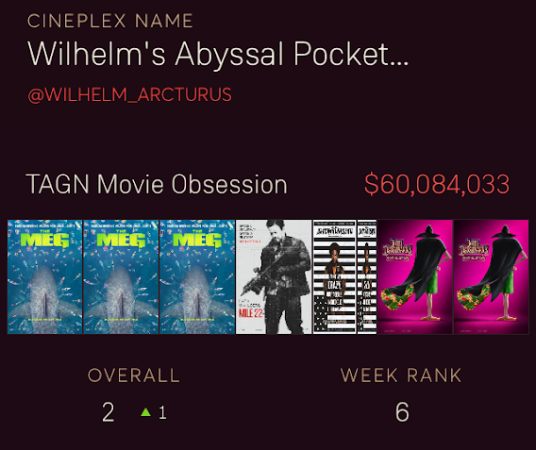 That wasn’t a bad pick.  I did okay for the week.  But if I had just stuck with my Monday pick I would have won the week in the TAGN league because CRA only dropped 6% week over week, which was just the sort of unprecedented result that was needed to justify the price.  Anchoring on two screens of CRA was the path to the perfect pick. 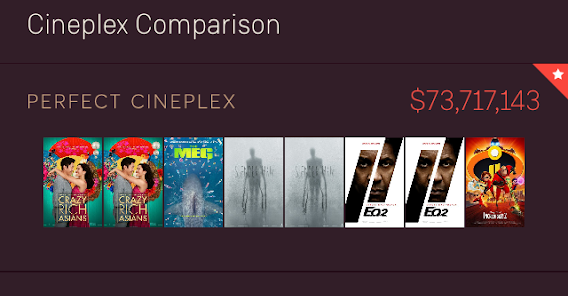 While I failed to get on board with CRA, at least I didn’t go with Happytime Murders which, in addition to confused marketing and poor reviews, also fell into third place overall for the week behind The Meg.  And that wasn’t because The Meg was suddenly on fire, but because Happytime Murders just didn’t have the draw.

On the other hand A.X.L. did okay, at least based on its FML pricing.  It ended up just about where it needed to be so if you used it as a filler item it didn’t drag you down.

Thus the week ended up with scores looking like this:

Joanie won the week, their first win of the season, though grannanj and Vigo were close behind.  All three of them anchored on a pair of CRA screens.  After that we get into people who anchored on The Meg.  Corr had four screens of it, Ben had two, and I had three.  Go figure.

After that Happytime Murders start figuring in lineups, dragging them down, though SynCaine went all in on Mile 22, so stands out in the pack in that regard at least.

That left the overall scores for the season looking like this:

Corr widened his lead against Goat and myself, though I was able to reclaim second place from Goat.  Vigo jumped up several spots on a strong performance and Joanie pushed Bhagpuss off of his hard earned tenth place spot with their week winning finish.

Now we are headed into the fourteenth and final week.  While Corr has first place locked, Goat and I are still battling over second, while fifth position still could change hands as well.

To get there we have the following choices.

Falling off the list for the final week are Slender Man, Mamma Mia 2, The Equalizer 2, and Ant-Man and the Wasp.  I am a bit surprised that The Increadibles 2 held on for another week since it was the bottom pick for week thirteen.  Pixar magic I guess, as it has made the cut twelve weeks running now.  That is no Black Panther run, but it is damn good.

New this week are Operation Finale, Searching, Kin, and Ya Veremos, none of which I had heard of until I started working on this post.

Operation Finale follows the story of the Israeli abduction and trial of Adolph Eichmann in 1960.  This tale has been done before as The House on Garibaldi Street , The Man who Captured Eichmann, Eichmann, and Operation Eichmann.  The latter stands out in my mind especially since it featured Werner Klemperer as Eichmann and John Banner as Rudolph Hoess, roles made somewhat surreal due to their characters on the show Hogan’s Heroes.  I remember seeing it on TV at one point and not being able to tell if it was serious or not for quite a stretch due to the actors and how they played it.

Operation Finale was pegged at about $7 million on the last long range forecast I saw, though it was trending upward.  It should be at about 1,800 theaters in the US.

Searching is a thriller starting John Cho, of whom I am a big fan, about a father whose daughter is kidnapped and as the police find no leads he goes off after her, following her digital footprint.  A technological Taken maybe?  I don’t know, but there is no long range forecast for it, so maybe not at the Liam Neeson scale.  It is supposed to be in 1,100 theaters, expanding from just 9, and is in its second week so won’t get any boost from Thursday night previews.

Kin is… well… I will let the ad copy spell it out:

Armed with a mysterious weapon, an ex-con and his adopted teenage brother go on the run from a vengeful criminal and a gang of otherworldly soldiers.

So we have that.  It was called at $5 million on the latest long range forecast and was estimated to be in 2,100 theaters.

And then there is Ya Veremos, a Spanish language film, with no long range forecast either.  While it has done very well in Mexico foreign language films are always a bit of a wildcard here.

On top of all of that, we have a holiday weekend coming up in the US.  Viva Labor Day and all that.  Time to put away the white shoes.

That means this week fourteen is a four day haul, Friday through Monday, and the forecasts I mentioned above were only for the first three days.  Forecasts and results always get messed up on these weeks, a situation made all the worse by this being the final week of the season.  You are pretty much on your own this time around as the forecasts won’t help much.

Also, the plan for next season is to return to the default FML rules, including screens locking at 9am Pacific Time on Fridays, so you’ll have an extra day to pick in the hope that fewer people will forget.  If you have any thoughts on next season leave a comment here or in the FML Chatter group for the league, which is where we are also talking about scoring alternatives.

But this season still is still going, though it effectively closes on Thursday at 9am, so you have less than 24 hours to make your final picks.  Go do them!  Now!

My Monday Hot Takes picks are currently 4x The Meg and 4x A.X.L., but you know I’ll change my mind by Thursday.  I am trying to figure out who goes to the movies on Labor Day weekend.