And so it goes, week fourteen, the final week of our summer Fantasy Movie League is done.

And with that we have but to tally up the scores and declare the winner.  The choices for the final week were:

And none of them really shook expectations, save for The Incredibles 2, which turned out to be the best performer for the week.  To answer last week’s question, I guess it is kids who go to see movies on Labor Day.  Or maybe not.  CRA still topped the box office.

I vacillated on picks over the course of the week.  On Monday I was in with 4x The Meg and 4x A.X.L. as my pick.  Come Friday morning I was spooked by some optimistic predictions and jumped on 7x Operation Finale and 1x The Incredibles 2.

But on Thursday morning my mind was set on 3x The Meg, 2x Alpha, and 3x The Incredibles 2. 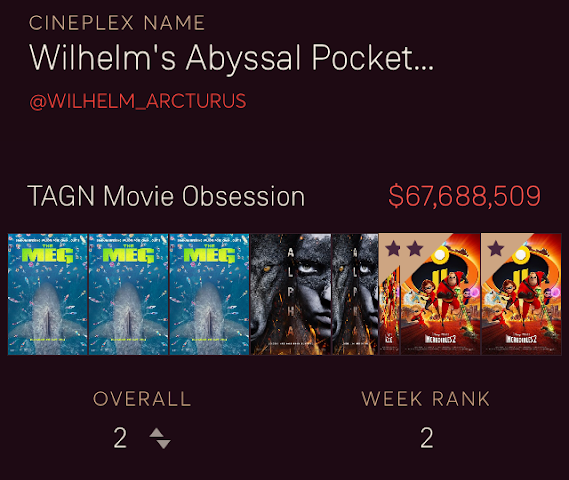 As it turns out, even with no bonuses in the TAGN league, that was my best scoring pick.  It also wasn’t a bad pick overall.

The perfect pick for the league was a bit better, but not a ton better.  Three screens of The Meg appeared to be the best anchor when it came down to it. 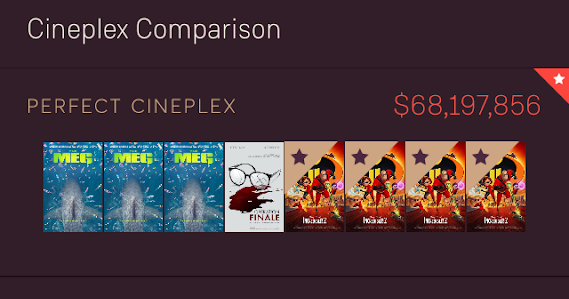 The thing is, this was a week without a huge winning or losing pick.  Everybody who picked this week ended up within a $11 million band of choices, which wasn’t enough to dislodge many people for their spots in the ranking.  The scores among those who were in for the final week looked like this:

Only eleven people picked this week.  Vigo led the pack anchored on The Meg, while I was just behind with the same anchor but different filler.  Then Ben with a heavy bet on Mission Impossible, Bhagpuss with CRA as his anchor, and Miniature with and anchor on The Meg and Mission Impossible.

After that there was everybody who went with seven screens of Operation Finale, less Grannanj, who had a CRA anchored lineup.  That left the final scores for the season looking like this:

The narrow gap between first and last this week meant not much change, with the first eight spots a duplicate of last week.  Bhagpuss snuck back into the top ten by virtue of acing out Joanie by a hair and due to Po being out of town and not picking.

So there it is, the final score.  Corr takes the crown for the summer season!

And that is it for the summer blockbuster season.  As usual, it starts big but loses steam before Labor Day.  Look for another post in a bit about the updates for the Fall season.  Yes, there will be a Fall season.

1 thought on “Summer Movie League – With a Whimper”