The peace of the north, where the Imperium agreed to withdraw forces back to Delve and not bother the north of null sec for a month and GotG for a full six months, came into effect on Saturday.  And with that began the first big move operation.  It was planned for 18:00 UTC, 11:00am for me, on that Saturday.

The first call to form up came at seven minutes before the hour in a ping and I was ready for it.

The whole operation had been announced almost a week in advance, so I had plenty of time to prepare.  As usual during a deployment, I managed to acquire a range of subcaps in my hangar.  Actually, in both of my hangars, the one in the Keepstar in 6RCQ-V and the one in the station in ROIR-Y in Pure Blind, where Reavers had been based for almost a year.

Usually the accumulation of ships means flying my main and my alt together in multiple move ops and maybe finding somebody with a bit of space in the ship maintenance bay of their capital ship to carry a couple of bombers or such.

This time however, one of the ships I managed to accumulate was a Naglfar dreadnought, a prize from the race that Ranger Gamma ran back in late December.  It was supposed to be a suicide dread, something expendable to drop on a valuable target like a titan   I only managed to use it one, during the first Keepstar battle at X47L-Q, and it survived so I had it to move back.

That turned out to be a bit of a boon.

With almost a week’s notice I was able to pack my ships into the Naglfar and jump it from ROIR-Y to the Keepstar at 6RCQ-V.  There I was able to stuff almost all of my remaining ships into the the ship maintenance bay along with the assorted modules and other stuff that ends up rattling around the corners of your station hangar when you stay in any one place for more than a week or two.  So much nanite repair paste mocking me because I forget to overheat most of the time.

The only ships that did not fit were a couple of travel interceptors, which are easy enough to jump clone to and fly out, and a Megathron battleship for the Baltec doctrine that I think I flew exactly once. (But that was one more time than the Ferox I had there as well.)

The Megathron was problematic.  A Battleship is big and takes up a lot of space in a ship maintenance bay, so I was reluctant to try to foist it off on another cap pilot.  But tech I battleships insure nicely and I wouldn’t miss it if it was gone, so I decided to just fly it home on its own.  I figure, best case, I might scatter a small gate camp and get a kill, while the worst case would be to lose it, collect the insurance, and not have to worry about it anymore. 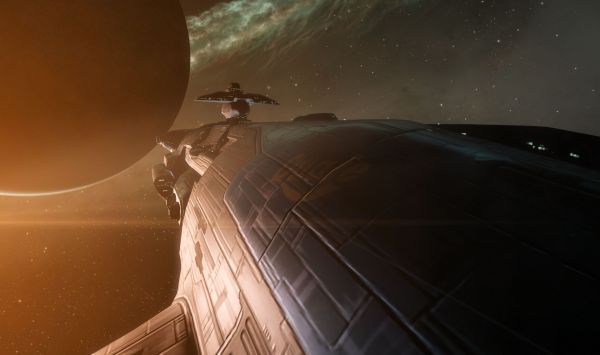 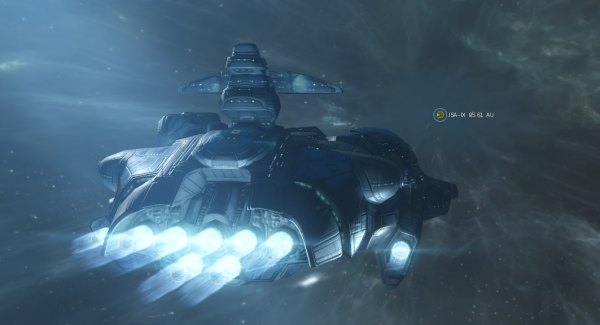 Megathron on its way

The trip went off without incident.  It was even relatively quick.  With the revisions to jump fatigue I only had to wait for a timer to cool down a bit before hitting the next jump bridge.

My small op was done.  The big op was coming.  I was on and ready to go before the first ping came.

The first ping was for four capital fleets, divided up by type, and an overflow fleet.  Those quickly filled up and a second overflow fleet was called.  Then two subcap fleets were called.  If I recall right there was also an overflow fleet for subcaps eventually, and then a final fleet for people who could fly Apostles to help get the strategic force auxiliary reserves home.  I got my alt in for that, so had two accounts running for the move op.

If I had know that was going to be a thing I could have shoved the Megathron in the Apostle to carry it home.  Oh well, it was done already.

Move ops can be long and exasperating affairs, as demonstrated by the classic Endie “trail of tears” graphic memorializing an all day move to Delve from the north. 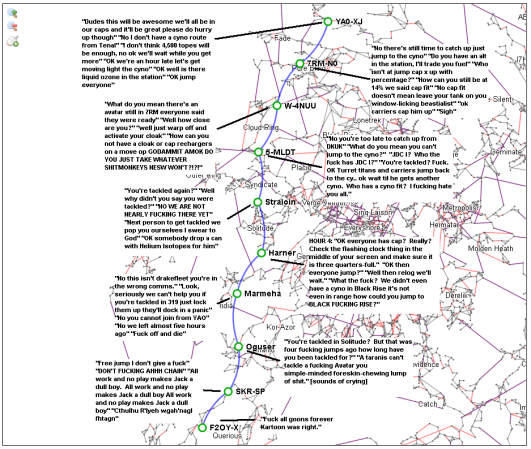 The Trail of Tears move op

That was back when capitals were rare and the pilots alleged to be the elite.  Now almost any scrub who rats in Delve has at least one capital ship and many of them have supers or titans.

And now, on a Saturday morning I was going to move to Delve with more than 1,800 other capital ships and a couple of fleets of subcaps, all of us sharing the same voice coms channel. (For those interested, there were about 1,400 actual people in the voice coms channel for the ~2,000 ships being moved, so less than a 2:1 ratio of accounts to people.)

There was a non-zero chance of this becoming a nightmare.

Instead, it all ran surprisingly smoothly.  People used all the advance notice we had to get ready, so a fleet of capital ships jumped to the first cyno just a little bit after 18:00.  The dreadnought fleet went at 18:17, while the Apostle fleet, the last to go, was cleared to jump at 18:25, landing on a Fortizar. 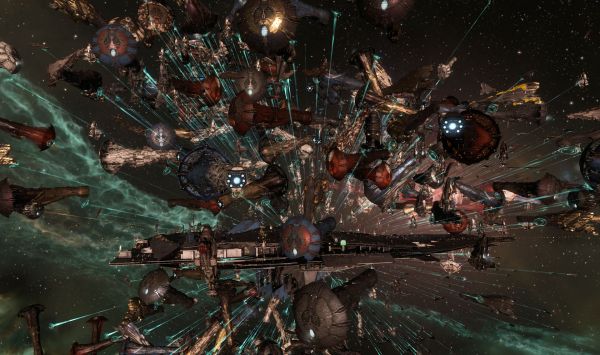 Our first jump was a few gates shy of critical gate to Fountain, but we had jump fatigue to burn off, so we were sent by fleet forward to the last system in Cloud Ring, then gated again by fleets in order to keep time dilation from going crazy.  We held up together on a Fortizar in B-DBYQ, the last system in Cloud Ring, and the jumping off point for the Fountain War five years back. 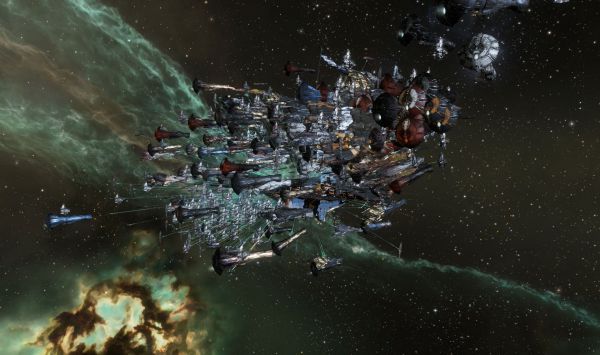 Again we were sent through the gate by fleets.  That put is in J5A-IX at the top of Fountain, where we regrouped on the Keepstar there, docking up.

At 19:34 we got the call to undock and, in a moment of hubris, the command was given for all fleets to jump.  That cranks up the tidi to 10% and ended with some disconnects, but for the most part it was just slow.  We got through, landing on the Keepstar in C-N4OD to dock up.

By 19:50, once people got through and things settled down, we were again called by fleets to undock and take the gate to KVN-36, the place where we were ambushed on another move op back in 2015. It ended up looking like a stream of titans being fired from the Keepstar. 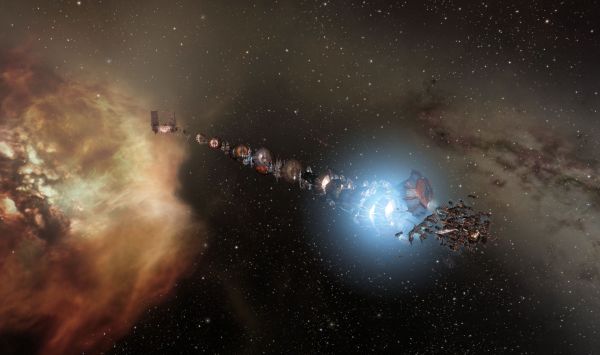 You could walk back to the Keepstar on those titans

There we aligned to the Keepstar, then were sent by fleets to dock up, the Apostles going last to avoid bumping. 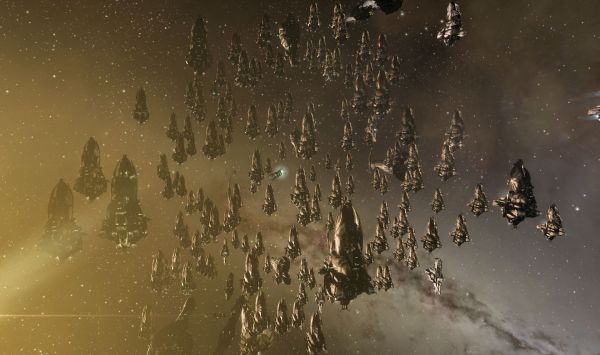 That put us in the southern half of the region.  We were told that for the next jump, which would bring us to the Delve gate in Y-2ANO, our arrival on the Keepstar would be recorded for use as a propaganda video, so we were all going to jump at once again, but this time we were not to dock up because that wouldn’t look as cool as all the ships arriving and just hanging on the citadel.

Again, lots of time dilation due to all of us going at once, but most people got through okay.  Traffic control was up for a lot of people and was even giving positions in the queue to jump.

412th position in the queue

My dreadnought went through, but the jump by the Apostle was cancelled by the delay.  I set it to jump again and it went through fine on the second go. 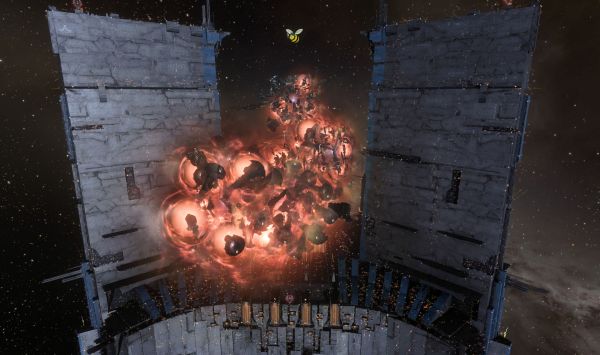 A batch of caps arriving in Y-2

After that we all aligned to the ZXB-VC and waited for cynos to get in place in 1DQ1-A.   Another chain of titans was then fired at the gate.

Once through we were cleared to jump to the Keepstar in 1DQ1-A.  The cyno in the Apostle fleet disconnected, but by 20:41 the cyno was up again and I was docked in the Keepstar contracting the Apostle back to the person who handed them out. 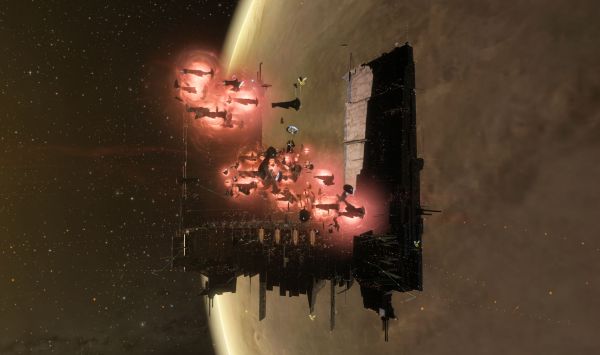 Back at the Delve Keepstar

So from the time of the first ping at 17:53 to my being done and able to log off was just about three hours, which is amazing for a move op of this size and complexity.  Pilots new and old managed to make it down.

I think we’ve gotten a bit better as a coalition, but also the leadership has gotten better at keeping these sorts of operations moving.  For one thing, there were markers called at various points, that if you hadn’t reached a certain objective you were too far behind and told to log off and wait for the next move op.  The whole move op didn’t stop people one person disconnected or didn’t follow instructions.

Of course, citadels have made this sort of thing easier as well.  At every jump or gate there was a citadel waiting for us, usually a Keepstar, letting us tether up or dock.

And so it goes.  I am back in Delve for the first time since November of last year.  When I go back to put together all the posts for this deployment, this ought to be the final one.

A gallery of my screen shots from the op: 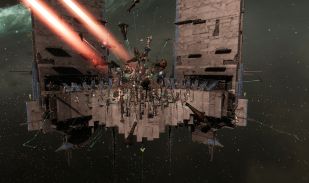 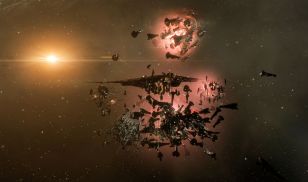 Landing by fleets on the Fortizar 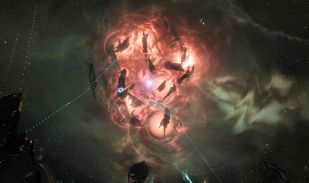 Caps landing in a batch 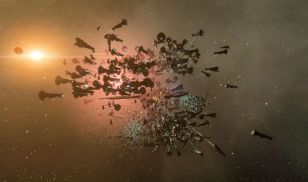 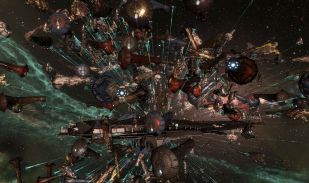 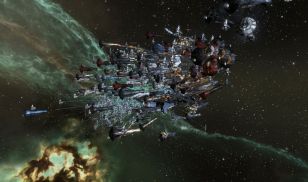 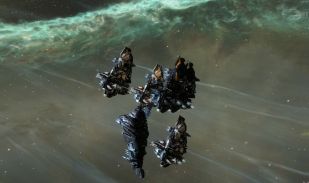 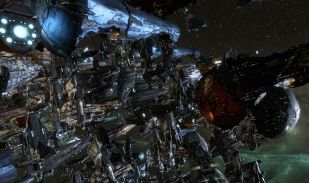 A mass of capitals 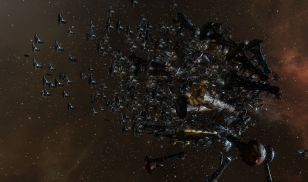 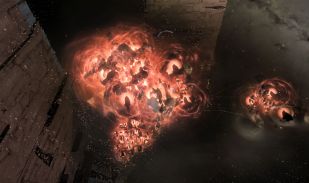 Fleets landing on a Keepstar 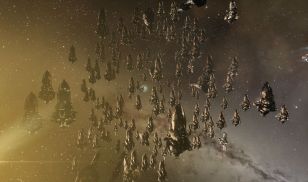 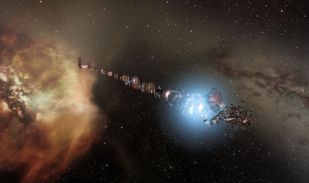 You could walk back to the Keepstar on those titans 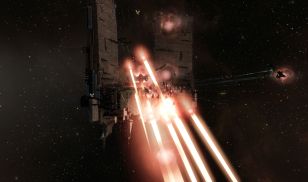 Jumping from the KVN Keepstar 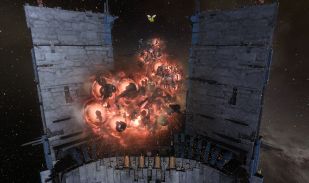 A batch of caps arriving in Y-2 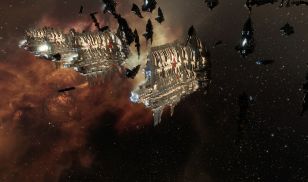 Apostles undocking before the Keepstar has drawn 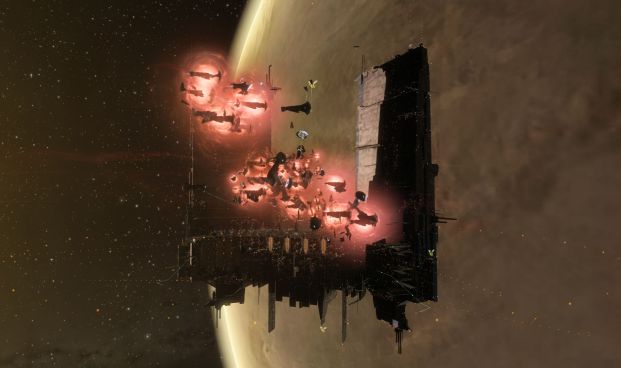 Back at the Delve Keepstar