It is probably just me that saw the Newspeak potential in the demise of Google Plus.

That attempt at humor aside, the word has gone out from the Googleplex in Mountain View that Google Plus will be no more.  Or that the consumer version of the product will be no more following a 10 month wind down, meaning that it will be gone at some point in August of 2019.  Google says that the enterprise version of Google Plus will continue.  Color me surprised that there was such a thing or that any enterprise outside of Google actually uses it, but they say “many” do.  I guess it is likely better than whatever Microsoft is pushing lately.  It is certainly better than anything Cisco has on offer.

The reason given for the closure in the news headlines involves a security flaw that could have potentially exposed the data for over half a million accounts.  The data exposed was limited to optional items entered in your Google profile (which is semi-public to start with unless you lock it down) and Google says it has no evidence that the flaw had been exploited.  But data breaches make for more views, so you may find your local news source pitching this as a stolen data panic.

The real reason for the closure is a little less dramatic.

Basically, so few people use Google Plus that it isn’t worth the effort needed to keep it secure.  They didn’t just say “low” usage but “very low” usage.  You’ll probably get no greater admission of failure than that.  If it has been popular they would have kept it open.  But now they have an excuse to shut it down.

Of course, part of me cheered at the news.  I am old, have a long memory, and have been prone at times to carry resentments long past their expiration dates, so I continue to see Google Plus as the reason that Google killed off the much loved and still missed (by me at least) Google Reader.  It has been more than five years since that happened and I am still annoyed by it and I still haven’t found a replacement that did all Google Reader did at its peak.  Some twisted logic in the back of my brain sees this as justice for the late idolized RSS reader.

But a bit of me is bemused by the change.  As it turns out, I actually check Google Plus pretty much daily.  There are a few people I follow there, including Richard Bartle, that make it worth the effort. The updates aren’t rapid, so it is something I check once or twice a day at most, but I do check it.

I also syndicate my blog feed there as well and get the occasional response, so there is life out there still.  But the activity isn’t anywhere close to what it was during the early days of the service, which in itself wasn’t that much compared to the competition, which is and always was Facebook.  Nobody is saying Google Plus influenced the last election or anything else.

So I suppose I will miss it.  And I know that it going away won’t magically bring back Google Reader, so my missing it will be genuine.  You can’t blame a company for shutting down a service that few use and which brings in no revenue.  The same goes for Google Reader as well.  And iGoogle.  And Google Insights.  And Orkut.  Man, what is it with me and dead Google products?

And so it goes.  We’ll see how it winds down between now and August.

But as we know, one person’s balance is another person’s horrific nerf.

Probably the biggest change coming with the October release is an update to electronic counter measures, of ECM.

Backbirds jamming in the dead of night

ECM effects, target jamming and other debuffs, are frustrating when you’re the target.  You just sit there watching the  indicator cycle down, unable to do anything about it, hoping that the RNG goes in your favor for the next cycle.

In an effort to alleviate this, CCP has made a change so that the ship being jammed can always target the ship jamming it.

I guess if you are in a fleet fight this might give you something to do.  As a logi pilot the jamming ships are often outside of my drone range, so about the best I can do is yellow box the jammer and hope they get nervous.

But if you’re in a small gang this simply makes ECM ships more vulnerable, and if you were using ECM to escape one on one encounters previously, that plan is now pretty much a bust.

There is talk of CCP boosting the survivability of ECM ships in the future, but for now they are more vulnerable.

The next item up is interdiction nullification.  This is a null sec thing.  About five years ago CCP made a change to interceptors that basically allows them to ignore warp disruption bubbles. 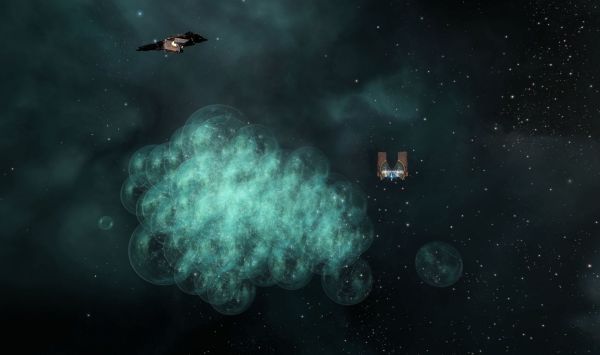 This has been controversial since it went in.  It made travel ‘ceptors a thing.  If you fit your interceptor so it can align in under two seconds you can move pretty safely through null sec space. (Just watch out for Asher in that smart bombing titan on a gate.)

The problem is that it also makes interceptor-only fleets pretty much impossible to pin down.  It is one thing to have some strategic cruisers with the interdiction nullification subsystem, like the Slippery Pete Tengus of past glory, zipping about playing hit and run.  They at least have to sacrifice some capability to get that and they cost a lot of ISK.   But when you have a fleet of arty fit Claw interceptors zipping in and out, quick to align, quick to shoot, and quick to warp off, blapping ships in your fleet one by one without much skin in the game, that gets on your nerves.

So, in the grand CCP tradition of half measures and compromises that make nobody happy, CCP removed interdiction nullification from some interceptors.

The combat interceptors (Claw, Crusader, Raptor, Taranis) will no longer have that null sec super power.  The reign of the Fozzie Claw may be coming to an end.

However, the fleet interceptors (Stiletto, Malediction, Crow, Ares) will keep interdiction nullification.  We shall see if this changes anything or if there will just be a new interceptor doctrine based on one of these hulls.

The Crow also had its agility number dropped as part of this.  Is a 2 second aligning Crow even possible?

The best part of this however will be the people who don’t read the patch notes and who end up getting stuck in a bubble and blown up wondering what just happened.  It is a good thing that I opted for the Ares as my default travel ‘ceptor I guess.

Next up was a change meant to fix a mechanics exploit with heavy interdictors that looked to screw over wormhole space.  CCP used the phrase “unwilling collateral damage” right up front.  Not being a hictor pilot nor a wormholer, I didn’t quite get what was going on with this, just that wormholers were getting the short end of the stick.  In the end, however, CCP created a new module… the zero point mass entangler… to address this and the wormholer’s ability to roll holes in high mass hictors will go unchanged.  I think.  There is a forum thread about it.

Also on the “fixes for null sec” list were two changes to titans.

The first was discovered in the recent war.  It turned out that if a group of titans used their doomsday weapon on a capital and killed it in a single volley, those titans could then re-tether on a citadel in a minute rather than facing the five minute post-doomsday restrictions in place for other actions such as jumping or cloaking.  That has now been changed and a titan that fires its doomsday will now be unable to tether up again until the five minute timer has passed.

In addition, the minor splash damage effect that exploding titans had was removed.  CCP had said in the past that they didn’t think that this was causing any performance problems in large null sec fleet battles, but everybody involved has been harping on this for so long that I get the feeling CCP just said, “Sure, fine, whatever, we’ll take it out. Are you happy now?” so they could get on to other performance related issues without having to hear about exploding titan splash damage over and over.  Sometimes you just have to do this sort of thing.

More generally there was also a change to the slot layout of the Triglavian Damavik frigate.

It loses a low slot but gains a mid, giving the hull three of each.  People said a frigate with only two mid slots wouldn’t be viable, and they were right.

Otherwise there were the usual round of small fixes, many focused on graphical fidelity, with an item thrown in there designed to make me grind my teeth:

It isn’t that I don’t want various mission assets upgraded to the latest shaders, it is that I hate when CCP refers to mission spaces as “dungeons.”  This is a long standing gripe and no I won’t ever get over it.  This isn’t Space WoW.

So that is it for October.  The update is already live. (That page has the links to the feedback and known issues threads.)  You can find the original ideas for the October balance pass in this dev blog.  They didn’t get to the Force Auxiliaries this time.

To see what did get changed there are the patch notes and the updates page to guide you.

Between now and November we have EVE Vegas.  That falls on October 19-21 and I expect it will be there that we’ll hear about the “next big thing” for EVE Online.  There is generally a big, named expansion at this end of the year.  Optimists hope for the next great feature that will revive the game while pessimists expect a Pearl Abyss enforced cash shop nightmare.  Reality will probably be somewhere in between.