I suppose the real questions are how Steam got to be so popular in the first place and why it hasn’t really felt much in the way of heat from challengers up until now?

In hindsight it seems like some sort of crazy accident. A little over 15 years ago, in September 2003, Valve launched a replacement for World Opponent Network, the Sierra Online created platform and which Valve ended up owning, because they wanted something that would do software updates, DRM, anti-cheat, and online matchmaking in one package.

And thus Steam was born.  First it was for Counter-Strike, but the real test came with the launch of Half-Life 2, the first game that made it mandatory to register with Steam.  Problems with that, including inadvertent suspending of a lot of people whose only mistake was buying the retail box (myself included) did not seem like an auspicious moment for the fledgling platform. 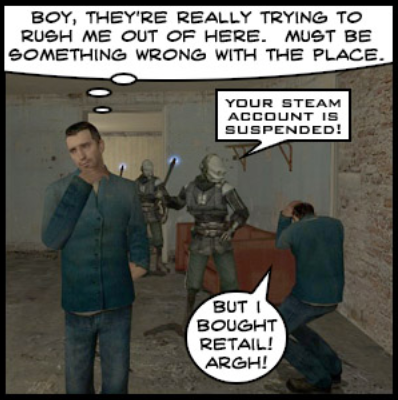 That’s me being beaten by the metro cop

Me being me, that soured me on Steam and all things Valve for a good five years.  I burned my account and walked away.  The arbitrary nature of my experience and the whole “I have the physical disk why can’t I just play the damn game?” question kept me away.  But it was an era where the physical disk was still king, so one could do that.  I walked by the Orange Box on the shelf at Fry’s with my nose in the air, knowing it was another Steam scam.  I wasn’t going to play Portal because I felt Steam was the lie.

But things changed over time.

The coming of Civilization V was the turning point for me.

Up until then I had purchased every new version in the Civilization series at the first possible opportunity.  The fact that the game required you to register it and use it with Steam gave me pause for a couple of days, but eventually I caved.  I created a new Steam account, which is the one I still use today, so I could get in on that traditional day one Civ fun. 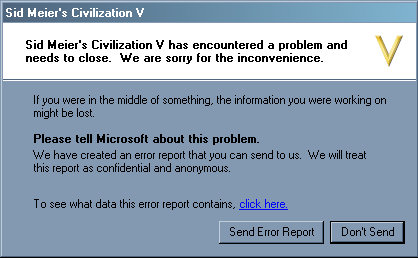 Same as it ever was

I remained wary of the service.  Again, the idea that one company could basically remove my ability to play video games I had purchased… not MMORPGs, but single player games… kept me from getting comfortable with Steam for a long stretch.

But then we entered the era of the Steam sale.  I think that, more than anything, made people get on board with Steam.

The concept, as initially explained, was quite simple.  Any game that launches… and we’re talking about games from big studios with marketing budgets, not indies… will have a certain amount of demand for it at the list price.  Once that market has been exhausted one can stimulate further sales by lowering the price.  That gets people who weren’t going to give you any money to buy in.  You get less money, but it is better than no money.

This was the price/demand curve from Economics 1A of my freshman year of college.  This was supposed to make developers more money.

What it really did was train a lot of people to wait for the inevitable Steam sale, or at least that is one of the complaints you hear from devs now and again.  Steam ruined the concept of list price.

Along the way Steam went from being a service for Valve games to being the DRM and matchmaking for certain third party games, to being the sales platform for just about anybody.  At the same time Valve went from being the company that make good games (that inevitably arrived late) to the company that runs Steam.  Being an online retailer turns out to be a pretty profitable business compared to video game development.

The problems of success are the best problems to have, but they are still problems.  Over time Valve removed just about every barrier to entry that kept any dev from getting on to Steam.  And every dev wanted to be on Steam because, during a short period of time, being on Steam was the key to success.  That was the visibility you craved as an indie dev.  But the mad rush towards success and Valve simply letting everybody in got us to the pile of garbage that is most of the games on the service today.  Getting on Steam is no guarantee to sales or even visibility anymore.

Sure, a lot of people were happy to sell through Steam.  Buying a discounted Steam code for a title at Amazon or Green Man Games is a pretty normal thing.

Others were unwilling to cut Steam in on their action.  You don’t find any Blizzard games on Steam.  They don’t need to sell there, they are big enough on their own.

For some reason Activision was okay putting Call of Duty on Steam for ages.  I suspect that, in a world where a lot of CoD sales are on consoles where the retail channel and the platform owner take their cut off the top, Steam taking their due didn’t seem like a bad deal.   But with the coming of digital distribution that seems to have changed finally.

There were small players who tried to get into the Steam-like sales platform business.  I remember the late Trion Worlds trying to turn their Glyph launcher into a third party storefront.

Then there was EA, who wanted to take on Steam by being, in their words, the Nordstrom to Steam’s Target.  That didn’t work out for them as well as they had hoped.  EA’s reputation, hardly akin to anything like Nordstrom, kept them from being a overall competitor to Steam. But with their Origin storefront they were able to opt out of Steam with SimCity and The Sims 4, depriving Steam of some revenue.

Which brings us to the situation as it stands now.  Steam is a mess.  New titles get lost in the morass of new titles that spring up every day.  Steam wavers on how to deal with its problems on that front.  Meanwhile, Steam’s cut of sales, once tolerable in the age of physical media, is now starting to be a drag on margins, a concern to any dev who is publicly held.  So things are running against it.

Big devs like Activision are more than happy to sell Call of Duty to you directly (or via the Blizzard launcher).  Fallout 76 also chose to give Steam a miss, a first for the franchise in a long time.  And it seems like that plan is going to become more common.  To counter that Valve has announced a new revenue sharing plan, so if you make more money Steam will take less of a cut.

And then there was Epic Games’ announcement earlier this week that they plan to offer their own platform and only take 12% off the top compared to Steam’s default 30%, even waving the fees for using their Unreal Engine if you go with them.  They even have a nice revenue split chart with their announcement. 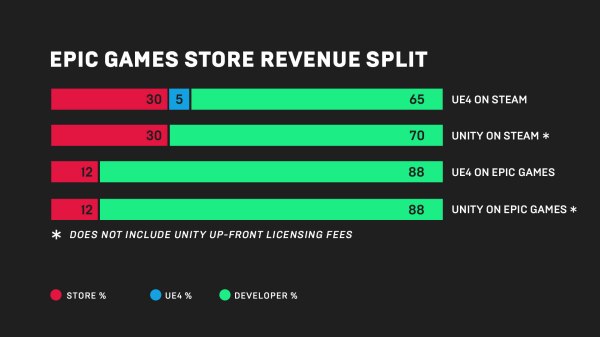 Look how much more Steam takes

And if that were not enough, both Discord and Twitch have been backing their way into becoming game selling platforms.  Amazon, which owns Twitch, has been priming the pump with free games available via the Twitch client (the one time Curse client that a lot of us had already installed to manage WoW addons) for Prime members.  And you can just bet that will be the platform used to sell their upcoming games.  And Discord has had its own storefront going since August.

What is Steam going to do?

Well, they do have all the advantages of the incumbent, including a lot of players with large investments in their Steam libraries.  I’ve said in the past that this is a huge barrier to any competing service showing up.  I certainly do not want to have to keep track of which game I have on which service.  I have problems enough remembering which show or movie I want to watch is on Netflix, Hulu, Amazon, or Comcast.

And then there is all of the community stuff like mods that Steam has accumulated over the years.  You can’t make that sort of thing happen overnight.

So how do you assail an incumbent?  Be better, be cheaper, or be different.

There are certainly ways to be better than Steam.  I do wonder what Epic’s plan on that front is.  By lowering their take so dramatically compared to Steam they are going to see a lot of interest from smaller devs who will feel like they are getting the shaft from Steam and the announcement that big players pay less.  Epic just has to figure out how to curate so they get quality rather than quantity.

Being different is hard to assess, so I’d have to see more from any Steam competitor.  I don’t like the Steam storefront interface, but I dislike it less than most competitors.

And then there is being cheaper, which Epic went for in a big way.  Not cheaper for you and I, but cheaper for the developers using their platform.  At the percentage they are talking, and with the muscle they have developed pushing Fortnite, they might be able to woo some bigger titles their way.

We shall see.  The path of Steam over the years has been a strange one from time to time.  I doubt it will be over any time soon, but Valve’s dominance does seem to be under an actual threat for the first time.

Others assailing this topic: