Tinnudir is the hub of Evendim, the central point from which most of the tale of the zone is told.  Oatbarton, Dwaling, and High King’s Crossing lead you into the Evendim, but Tinnudir is where you are set up for the long haul.

Tinnudir isn’t much of a place even.  It lacks the pastoral charm of Oatbarton and the overwrought epic nature of High King’s Crossing.  Esteldin is sprawling compared to it, Ost Guruth feels like a fort when set against it.  Tinnudir is barely a place at all, some minor wreckage in a zone filled with the epic structures of the kingdom of Arnor.  It is just so much dirt and a few broken walls. 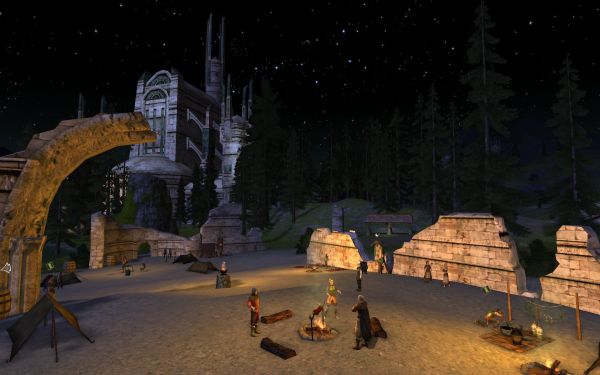 It has all the requisite NPCs you need to hand, a task board if you feel you need to work on your standings (you won’t), a stable, a dock, and the usual crafting stations and skirmish camp off on the periphery.  While you’ll speak to many NPCs about quests, Orchalwe… whom I call “Ollie” in my head… is the main focus.  He sends you thither and yon around the zone. 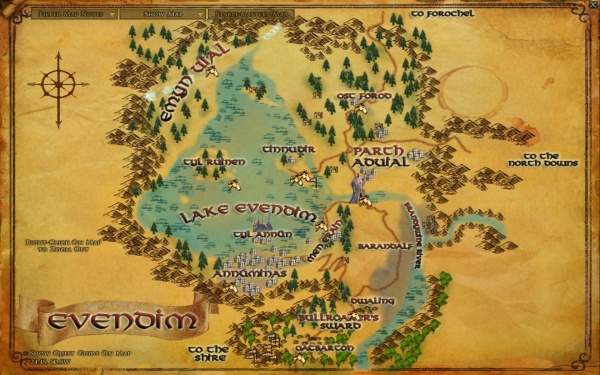 Evendim as a zone

If you do every quest… and for maybe the first time ever I gritted my teeth, determined to do every last quest I could… you will pay a visit to nearly every acre, trod on every island, go up on  every hill and down into every dale before you’re done.

In the past I have always done everything to the east of Tinnudir, and all the islands, but I am generally getting so far ahead of the leveling curve by doing that that I tend to skip the Eavespires at the north end of the lake and the swathe of quests that lead down the western side to where the wood-trolls live.

This time I did the whole thing, even stopping at the wood-trolls long enough to make some headway on one of the dwarf racial deeds. 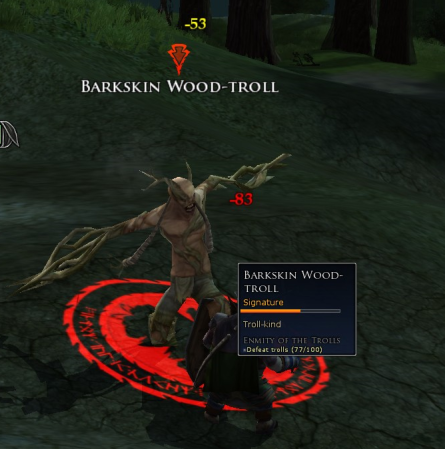 Advancing enmity of the trolls

I spent a few nights working my way around the zone, playing for an hour or two tops on any given night.

I even made it over to the blue lady and her corner of the zone. 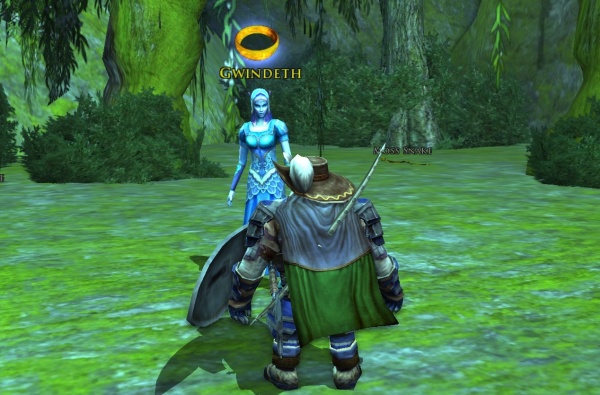 She is a bit out of the way and doing her quests require some swimming, something that will be familiar to anybody who did the zone in the early days before boat travel was added.

The number of places you are sent off to visit and the plethora of quests that await you make it feel like you’ll be there for a long, long time.  But, in the end, you don’t really travel that far… except to go to and fro with Gwindeth… and the quests go by quickly enough.

Soon enough I was on the boat to Men Erain, the way of the kings, where the tombs of the kings of Arnor lay.  Arriving there is the sign that the end phase of the zone is nearly at hand.  There is a series of quests to run there that send you in and around the tombs as well as way up into the hills behind, far enough that you can look over the peaks and see the bridge and the way back to Oatbarton.  Meanwhile you’re practically hanging over Annuminas, slaying the inevitable tomb robbers. 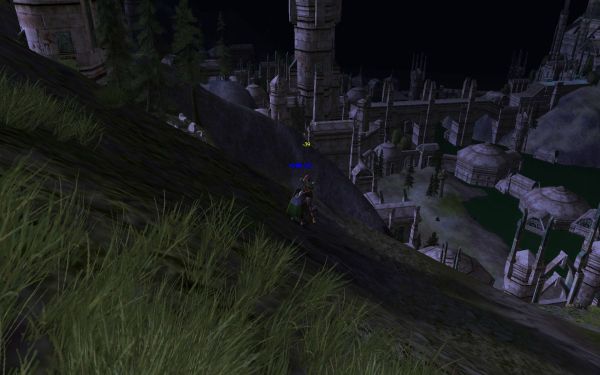 Fighting on a slope

At one of the peaks your quest objective is simply to use the /look emote to see what you can see about the state of the tomb robber infestation. 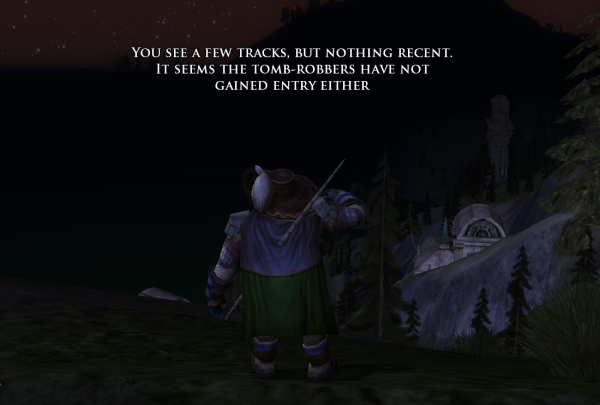 Looking out and reporting

But even that long trek takes less time than you think it will.  And soon you’re done with Men Erain and are back at Tinnudir speaking to Orchalwe again.  But this time he isn’t going to simply send you off on another task.  This time you’re to meet up with him in Annuminas, the final area of the zone. 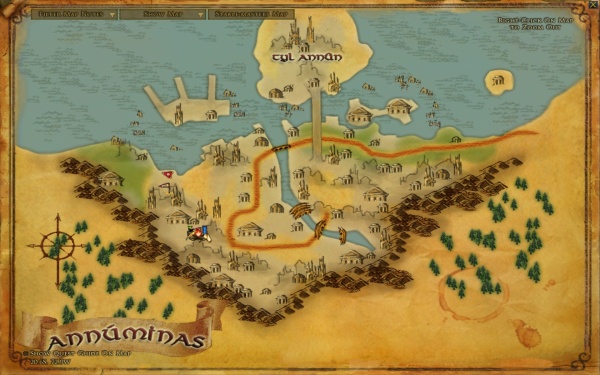 Annuminas was the capital of Arnor, and while it lays in ruin it is still an amazing site.  In a way it is crazy that Turbine spent the time to create this area, something that is barely a footnote in the books most of us have read.  But it is really the highlight of the zone, the payoff for tracking about after the various and sundry foes.  Here the forces of Angmar congregate.

I spent a mithril coin to take a swift travel trip to the camp of the Wardens of Annuminas within the city just to avoid picking up too much along the way.  The camp is spare, though still arguably nicer than Tinnudir. 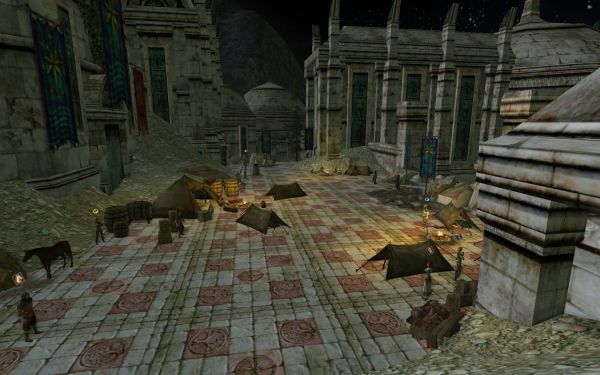 The Wardens camp in Annuminas

It doesn’t have all the amenities, but there is a task board and vendors and a few quest givers standing about the place.  But you really only need to speak with Orchalwe.  Once you start with him he joins you as an ally in your exploration of the old capital city. 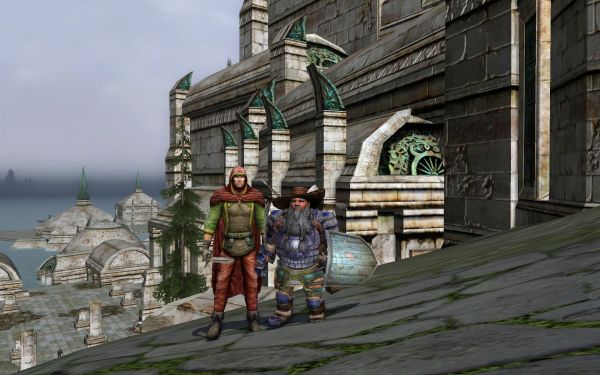 WoW has had quest givers like this, ones that accompany you along the way, letting you turn in quests and pick up new ones as you go.  I’m not sure who had the idea first.  But I haven’t had a quest giver quite like Orchalwe anywhere else.

In Annuminas you have a few larger scale quests and Orchalwe has some specific tasks for you to open with.  But the real adventure is the exploration of the city as, in each district or area Orchalwe will pop a quest for you.  But you only get the quests if you get to the right places.  So I always make an effort to get into every nook and cranny.

Some areas of the zone are fairly challenging, featuring groups of signature mobs.  Orchalwe assists you, and throws some heals in battle that can keep you going, but I rolled in there at level 38 which is a bit behind the curve, so there were some tight fights. 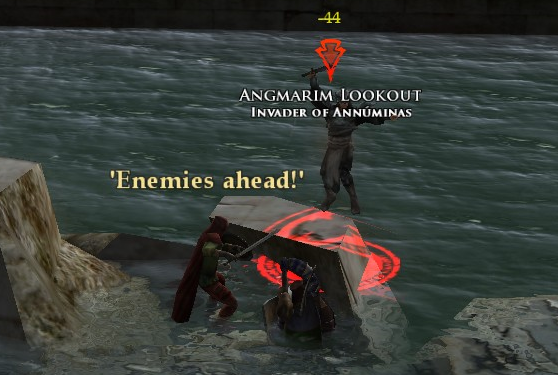 However, I was fairly lucky during my explorations.  While by this point I was well behind the main pack of players, many of whom were already lingering about at level 50, I still managed to run into fellow travelers along the way at key points, forming ad hoc fellowships of need in order to tackle challenging objectives.  A level 45 bard showed up to assist me with the one small fellowship quest I needed to tackle.

I actually reached the point where Orchalwe was done.  I had achieved his over-arching objective and could have dismissed him and headed back to the camp.  But I knew from memory that I still had four or five of his location based quests left to do, so I dragged him along as I sought them out.

I didn’t really need those quests.  I had long since finished the final quest count deed and I had hit the kinship level of faction with the Wardens of Annuminas Men Erain.  I even had the advanced slayer deed for invaders from Angmar done.  But I really wanted to get in and see and do every last quest.  Given how long it had been since I had run through the zone last and the small likelihood that I was going to be doing it in this depth again anytime soon, I felt I had best treat this like it might be my last visit.  You never know what the future might bring.

And when I the control points had all been take and I finally got to that last boss on Tyl Annun and defeated him, I dismissed Orchalwe and made my way back to the camp, done with Annumiunas in just an evenings play.

From there Orchalwe says to meet him back in Tinnudir, which he pretty much has to say since he’s going to be there when you get back anyway.  From there it was a final quest turn in with him.  Then I hit the faction vendor to make sure and pick up the mount from them.

Then my quest log had tasks pointing me at Rivendell and the Trollshaws.  I was still shy of 40, which you need in order to take the stable mount to Rivendell, so I went to the Trollshaws.  I left behind me quite a few deeds left undone.  The numbers needed for the slayer deeds start to add up, sitting at 270 total kills needed for some.  I had no problem hitting that number with the ubiquitous tomb robbers and the invaders from Angmar, but others I let be.  I got all the titles and basic deeds, but the advanced deeds I’ll leave for another time.

And so it was off to the Trollshaws, a zone that is always a bit problematic for me, to get level 40 and continue the epic story line.