Angmar has a problem in that the level 40 to 50 content in Lord of the Rings Online, incomplete though it might have been at launch, now suffers from some overlap.

As with the situation between the Trollshaws and Evendim, if you commit to the other zones in the same level range as Angmar, which goes up against Forochel and the Misty Mountains to start with, you may find yourself above level before you even arrive in the zone.  On a standard server, where the experience is much more generous, and Moria is in the offing, Eregion might be where you head instead, as it also overlaps with the high end of the 40-50 range, allowing you to bypass Angmar altogether.

Into some legends this time…

Angmar also suffers from its position in the actual story line of the books, which is to say it is pretty much outside of the books save for the occasional historical reference by the likes of Aragorn.  There are no memories from the core books of The Hobbit and The Lord of the Rings to relive there, no landmarks to spot, no adventures to relive.  Who wants to go to Angmar when Moria awaits?

On the flip side, the game’s initial title was The Lord of the Rings Online: Shadows of Angmar, making Angmar arguably the raison d’etre of the first 50 levels.  It is your goal, your final destination, the end game content of the pre-expansion era of LOTRO.

The funny thing is how little time I’ve spent there over the last dozen years.  It is on the far side of Rivendell which, as I mentioned, is a place few of my characters have managed to approach over the years.  I also think, as I said with Goblin Town, it used to be more focused on group content.  Certainly the epic quest line was a fellowship only affair.  So, with the Misty Mountains closer to Rivendell, Forochel more inviting, and Eregion on the direct path to Moria, I have managed to avoid most of Angmar.

This time around though I was intent on getting through the epic quest line, and that sends you to Angmar, so it was off to Angmar I went. 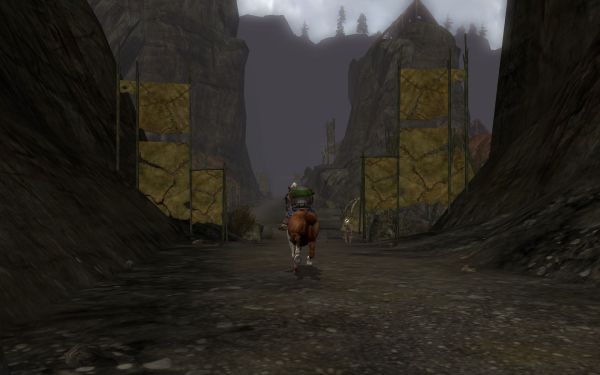 I was a bit disappointed on arriving at the first stop in the zone, Aughaire.  Having run myself up to just shy of level 46 in Goblin Town I found myself considerably ahead of the curve when it came to quests out of there.  They started in at level 40, way below my level.  This leads me back to a working theory I have had about the original design of the game.  I suspect that somebody felt that having players run from zone to zone, doing a few quests in here then a few quests there, was somehow a desirable state of affairs.

That may work for some, but I prefer to settle into a zone and play it through.

Also on the disappointment side of things was the fact that there was no swift travel option from Aughaire to Esteldin or Rivendell.  If you get sent on a “Go check in with Elrond” quest… and, of course you get sent on those… the ride back to Esteldin is guaranteed to test your patience.

Angmar as a zone is different from much of the game up to that point.  You’re now in a land that is a suzerainty of Mordor and has been for a long time.  There are no silly hobbits hanging around or reminders of the time of elves and abandon works of the men of Numenor.  The place is a colorless as the Borean Tundra and as spiky as the Blades Edge Mountains with some Stratholme like architecture thrown in for kicks.

Seriously, is this not the Borean Tundra?

The sky is an odd shade as well. 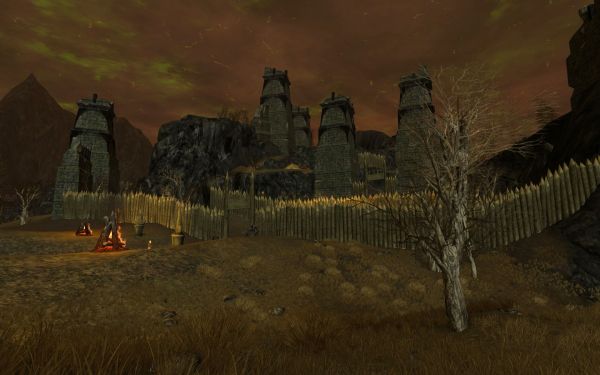 And outpost in Angmar

This is Mordor junior and, while it may be a dark gray shadow of that black land, it is the local focus of evil so when you cut your way through its denizens you’re stabbing at the groin of evil in the region.

The environmental sounds in the zone however are most excellent.

Not having done much in Angmar, I was determined to buckle down and see the sites no matter how many times I had to go back to Rivendell for and advise and consent session.  So you run around slaying plenty of orcs and wargs and men who have sworn allegiance to Angmar.  Oddly though, one of the deeds you get is to slay actual citizens of Angmar who, at first, are pretty sparse on the ground.

The quests were of the normal variety for the game, with the some variation.

I started running into more and more of a bias towards fellowship quests in the mix along the way.  I finished up what I could and followed the epic quest line to the next settlement, Gabilshathur.

Gabilshathur is a niche in rock populated by dwarves who, like the earth-kin in Aughaire, seem mostly interested in setting you to clean up the countryside.  My patience with the fetching lost items and slaying ten of this mob or collecting the gizzards of a dozen of another was starting to wear thin.  I decided to just follow the epic quest line for a bit, a plan that quickly took me to Gath Forthnir in the north of the zone.

Map of Angmar with additional notation

There, of course, I found myself a little in over my head.  I had made it to 47 by this point, but the quests and mobs were closer to 50.  Also, I couldn’t get the stable master stop at the encampment until I had raised my faction with the Council of the North, the local Free People’s franchise in Angmar.

This put me back on the “do all the quests” path though, again, fellowship quests were popping up a lot.  Something about it being an end game zone I am sure.

Also, you’d think I’d get something for the kinship I’m in

Fortunately, while the quest lines were not advancing my reputation very much, the local mobs tend to drop lots of tokens that can be consumed for Council of the North reputation.  I just had to take care.  In addition to the whole fellowship quest thing the land had more than its share of elite trolls wandering around.  For the most part I steered clear of them, though occasionally things didn’t go as planned. 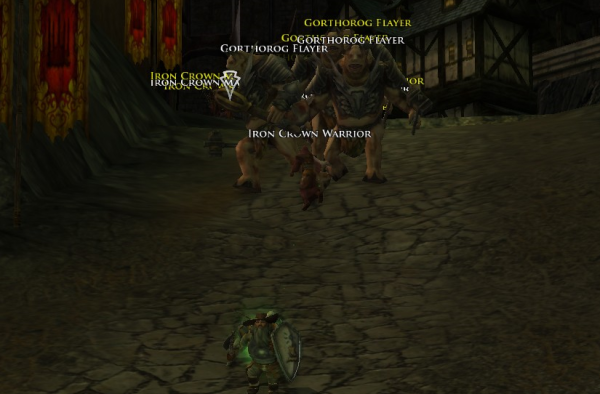 Just have to keep running…

Soon enough I was acquaintance level with the Council of the North, so I was able to get the stable master stop.  I was going to need it because the epic quest line had a lot of running about in store for me.

3 thoughts on “The Shadows of Angmar”