Back in mid-December we got the big announcement that Daybreak’s new game was essentially a retread mash up of PlanetSide 2 and whatever they are calling the Battle Royale part of H1Z1 these days, which itself was build off of PlanetSide 2 as I recall.  And thus PlanetSide Arena was born… or was at least revealed.

Not the worst thing Daybreak could announce.  Not something that interests me, but not completely off-base I suppose.  It still seems a strange move to attempt to jump into the battle royale arena, which H1Z1 pretty much proved was viable, with a new-ish product that is pay to play when it will have to compete not only with Fortnite and PUBG but also their own game, which is free to play.  Such is the way of things I guess.

Anyway, the announced launch date at the time was January 29, 2019, or this coming Tuesday as I write this.

That seemed aggressive, though who can say since they were borrowing heavily from PlanetSide 2.  And launch could mean early access or some other dodge.

However, apparently that date did end up being too aggressive, because this past week Daybreak announced that the actual release was to be postponed until March 26, 2019. 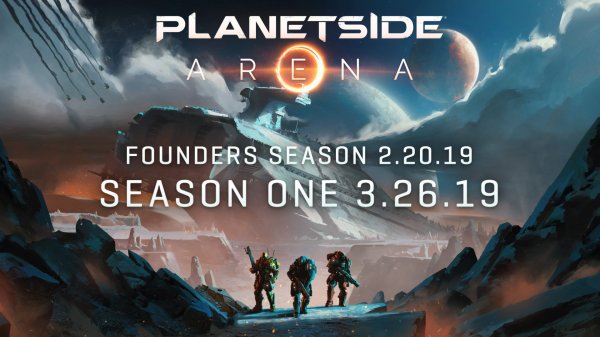 Season One move to March

The key passage from the announcement was:

What we’ve discovered during playtesting is that while we’ve made significant strides towards that goal, there are crucial feature enhancements and core systems improvements we can make that will lift PlanetSide Arena to the level it deserves. This game is a passion project for our team, with massive potential to occupy a unique space within the PlanetSide series and the overall shooter genre. And while we agonized about this decision down to the deadline, we ultimately decided taking extra time to supplement our feature set, fully optimize engine performance, and improve server infrastructure was absolutely necessary to deliver the quality, polished game the PlanetSide community deserves.

If the work needs to be done, it needs to be done, but I always get a bit of an eye twitch when a team shows up just before a deadline and says they need more time… a lot more time… to get things done.  I’ve been through that before on projects.  Then again, maybe this is a sign that Daybreak made enough money on lifetime subscription sales in December that they can afford to take the time.

If you’ve pre-ordered… which you can only do on Steam… you get to play a bit earlier in what they are calling the “Founders Season,” though I imagine that will add up to being the beta/stress test, which can be fun, hilarious, and frustrating by turns.

2 thoughts on “PlanetSide Arena Launch Pushed Back to March”