More build up to the EverQuest 20th anniversary next month.

As promised in the previous Producer’s Letter there will be two progression servers set to open on Saturday, March 16 as part of the anniversary celebration.

Let’s take a look at what we’re getting.

The first of the pair will be called Selo, a name no doubt derived from the bard class song Selo’s Accelerando, which let your group move more quickly. 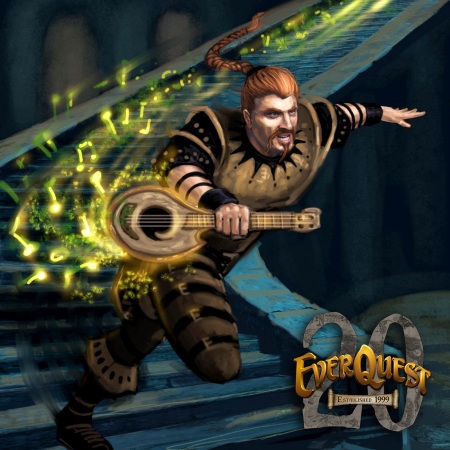 This is appropriate because the Selo server will be the fast/casual progression server, with an experience curve that will  likely let you get to level cap much faster than you ever did back in 1999.  It will still be slower than live servers, but not as slow as any past progression server.

It will also advance much more quickly, starting in the Shadows of Luclin era and opening up a new expansion on the first Wednesday of every month thereafter, starting with the Planes of Power unlock on May 1, 2019.  That will give people a little extra time to get ramped up on those initial levels.

After it catches up to the current expansion level, something that will still take close to two years (so many expansions, and probably a new one at the end of the year), it will become a normal live server.  There is a FAQ for the Selo server available.

The second server will be named Mangler, named for the black guard dog that hangs around in one of the back rooms of the Fool’s Gold in Rivervale.  It is of the more traditional progression server style.

The experience rate for Mangler will be somewhat slower than the usual, already slowed progression server norm, and is aimed at the more hardcore raider faction.  For this server, expansions will unlock every 12 weeks until Gates of Discord opens, after which expansions that include level cap increases will last for 12 weeks while those without will last for 8 weeks.

That still puts the life of this server out in the five year range.

There is also a FAQ up for the Mangler server.

Both of these servers will be in the “True Box” model that Daybreak has adopted, which means that you will not be able to multibox.  Multiboxing was deemed the literal worst thing ever by a loud faction of the progression server community.  And I get that it can be annoying to see one obvious group all being controlled by a single person owning your favorite spawn.  Further, I agree that on a server like Mangler, it is probably in the zone.

I want to say right up front that the idea of starting a progression server on the 20th anniversary of the launch of EverQuest that kicks off anywhere but classic is complete bullshit.

Seriously, who at Daybreak thought, “Let’s celebrate classic by bypassing classic!” was a good plan?  That was enough to make my playing on it go from “sure thing” to “maybe.”

That aside, I am also confused as to what “ultra casual” means to the team at Daybreak.  On hearing them use the term “casual” I thought they might relax the whole “true box” thing so people could dual box a tank and a healer or something, like I did back with Fippy Darkpaw.

Or, even better, maybe allow mercenaries onto the server from day one… in classic… so that you could hire your own in-game healer to follow you as you explored.  But neither will be the case.

I guess I am okay with the faster XP curve.  I can see the argument for not wanting to wear the hair shirt if you’re in for a casual tour.  But the whole faster expansion unlock thing?  That seems to be the opposite of what casuals have been asking for out of a progression server.  It is the hardcore raiders that always want the next unlock once they’ve finished up the current expansion.  Casual players have traditionally been the holdouts looking for longer stretches with each expansion since they tend to play at a casual pace.

Giving substance to that unlock history, it seems as though the hardcore raiding guilds are planning to avoid Mangle altogether and hit Selo instead, since it pretty much gives them what they have been asking for; the ability to level up more quickly in order to raid and faster unlock times for expansions so they can have new content for their guilds more often.

The casuals… well, if you trust the Progression Server section of the the EverQuest forums… are feeling left out.  I don’t seem to be the only one who thinks that starting anywhere besides classic is simply wrong, but there is the usual amount of arguing back and forth as to what the server ought to be, interrupted only by the person who opened a thread asking for a PvP progression server.  That seemed to unify a lot of people… against PvP.

But the key factor here seems to be badly set expectations.

Daybreak told us there would be an “ultra casual” progression server back with the Producer’s Letter, but did not bother to explain what that might really mean.  So for a couple of weeks people got to make up their own idea “ultra casual” server in the head, setting the expectations themselves in the big blank that Daybreak left open.  I certainly did so with my thoughts about mercs or true box.

And then Daybreak told us what they had in mind and it failed to match almost everybody’s self-constructed view.  No surprise there I suppose.  Remember when they told us H1Z1 was going to be for Star Wars Galaxies players?

We shall see if the heat in the forums leads to any changes.  Unlike EverQuest II, where the company often seems to blow with the loudest wind in the forums, the Progression Server section of the EverQuest forums has a long standing tradition of being ignored by Daybreak.  An actual post by a Daybreak employee there is generally looked upon as something akin to a miracle.

But starting a progression server anywhere except at classic… no… just no.  That has got to be fixed.  On a server where the unlocks will be once a month, I can’t even imagine an argument for skipping straight to Shadows of Luclin.  It will be unlocked soon enough already.  Seriously, what the hell?