We’re already into the back half of February and the Monthly Economic Report for January has finally made its appearance.  I suppose CCP had an update to push and event to launch, though the latter was pretty small while the former… well, the less said the better I suppose.

But now we have some charts and numbers to stare at finally.  So I might as well open up with mining, my usual start point. 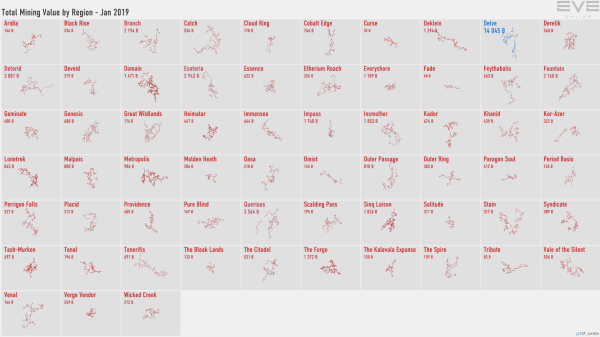 Mining was up some in our benchmark region of Delve, moving from 12.2 trillion ISK in ore mined to 14 trillion. 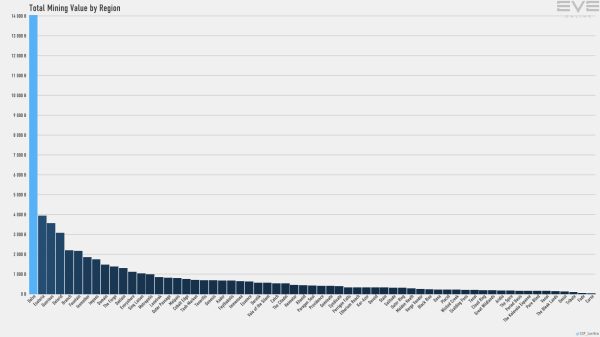 The bar graph shows that the top five regions for mining output remained the same, with Imperium owned Querious passing Detroid where Fraternity lives.  The top three all saw an increase in mining output, while the next two, Detroid and Branch saw a decrease.

Given that the price of ore was up slightly, if all things were otherwise equal, output should have been up.  That the Imperium and TEST (in Esoteria) have deployed some groups to the east of null sec may be suppressing output there. 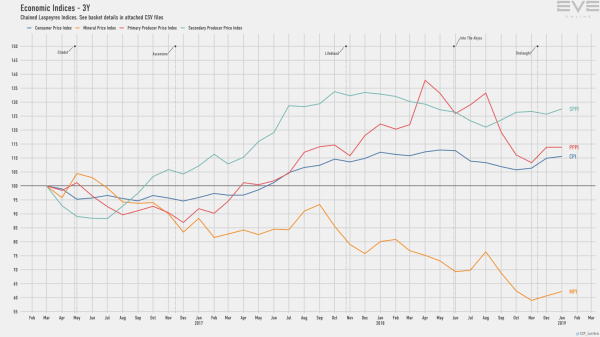 While up a bit, mineral prices are still near an all time low for New Eden.  That they bottomed out seems to suggest that we have hit a natural price floor.

On the production front, both Delve and The Forge, the top two regions, say a small decline. 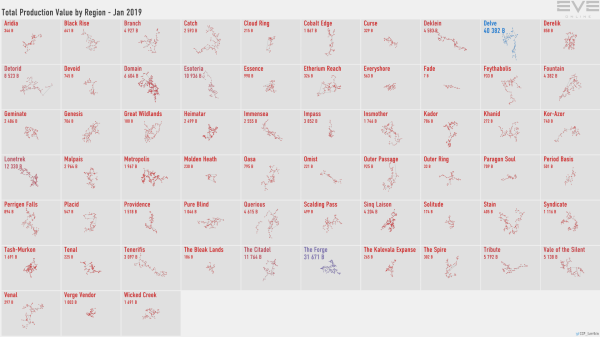 Delve remains the top region, though the three regions that directly feed Jita, The Forge, Lonetrek, and The Citadel, still combine to more than Delve, totaling up to over 56 trillion ISK in production. 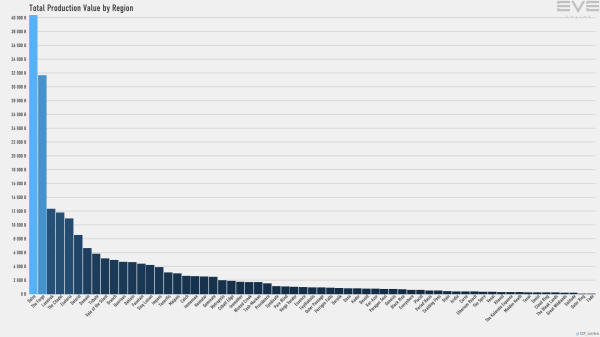 Looking at the bar graph, you can see Esoteria (TEST) and Detroid (Fraternity) are not far behind, holding fifth and sixth place overall, indicating that they are also building up capital ships and the like.

On the market value front, The Forge, home of Jita, continues to dominate the numbers there. 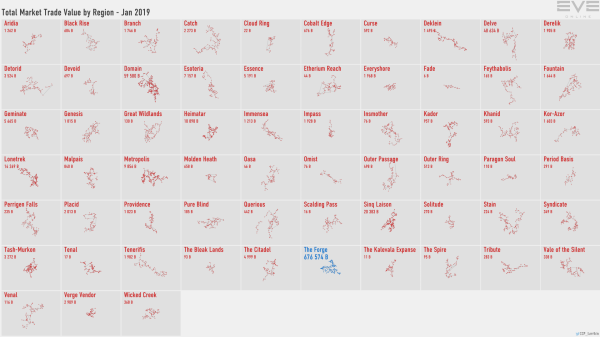 Trade in The Forge was down a little, but not enough to put any other region in the same ballpark, to the point that you have to exclude The Forge for the bar graph to show anything about the rest of New Eden. 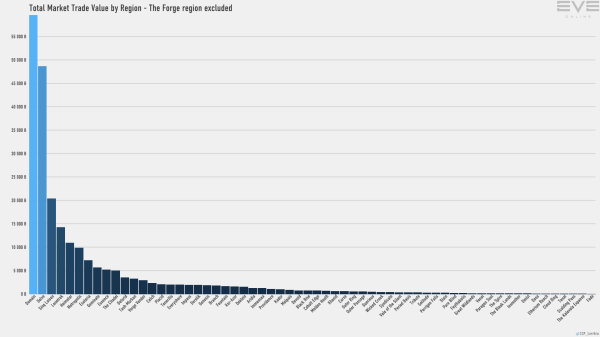 The ranking of the second tier systems remained unchanged, with Domain, home of Amarr, in second followed by Delve.

And then there is the big ISK faucet in New Eden, NPC bounties. 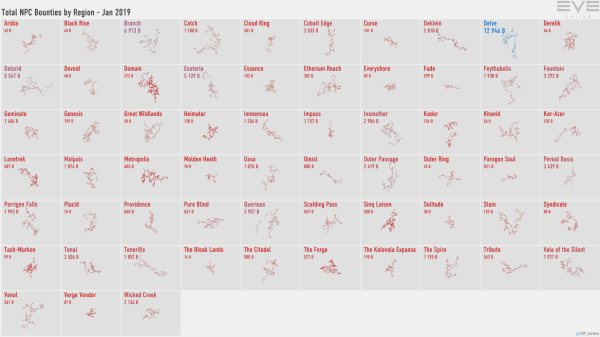 Delve, unsurprisingly, remained at the top of the heap, up two trillion ISK over December.  The Imperium has some SIGs and squads deployed, but otherwise continues to farm Delve under the protective supercap umbrella. 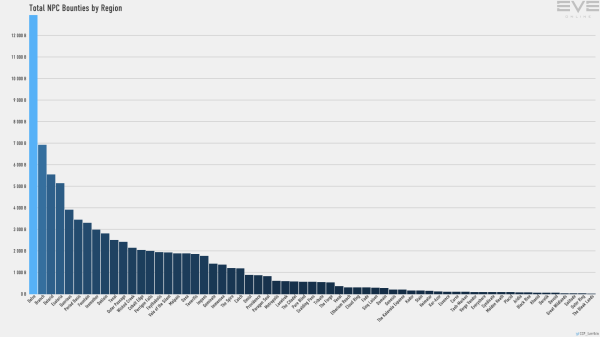 The next four regions remained in the same rank as before, Branch (GotG), Detroid (Fraternity), Esoteria (TEST), and Querious (Imperium), with all of them up for January.  That led to a new all time high. 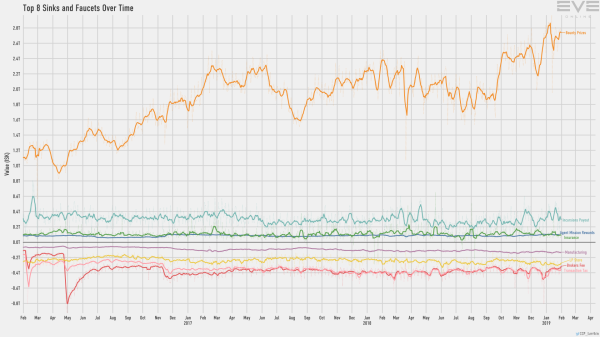 NPC bounties peaked at that new all time high early in January, but was drawn back down some mid-month.  My guess is that the fighting in the east of null sec and the ongoing showdown over the Perimeter Keepstar trade hub drew some people away from their ISK collecting.  I keep thinking that maybe CCP will make some more tweaks to address this growing ISK glut, but players rolled right over the last change that was supposed to slow down titan and super ratting.  We’re like that.

Of course, maybe CCP has its eyes elsewhere. 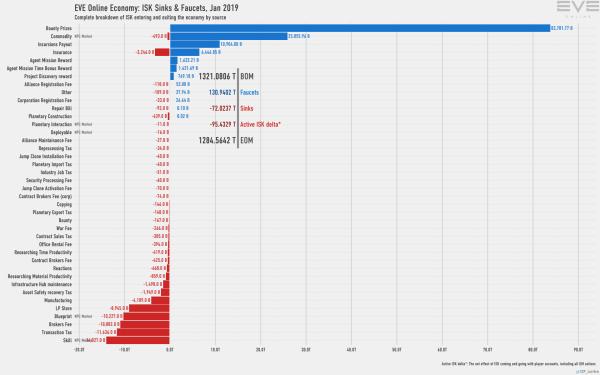 Despite the peak in NPC bounties, overall ISK in the game went down slightly, with the infamous “Active ISK Delta,” which includes GM’s going after botters and RMT sales, pulling 95 trillion ISK out of the economy.  In addition to bans, they are moving level 4 and 5 missions to Omega only status to close the courier mission botting exploit.  Go CCP!

And, finally, the region summary chart with which I like to end, the regional summary. 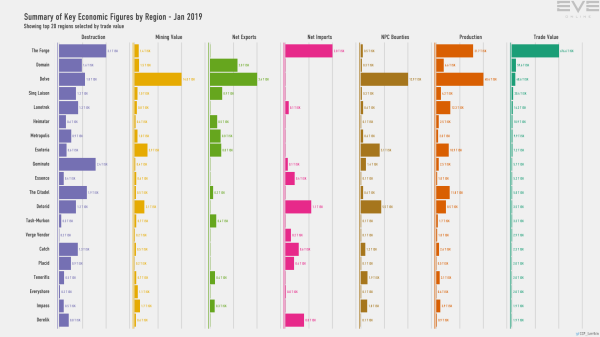 That gives you a nice overview of what each region has going on.

The Forge, while down from December, leads in total ship destruction.  That number that will likely go up with Burn Jita 2019 hitting this Friday.  And Geminate, where some SIGs and squads are deployed, saw its destruction number trending up.

And in a few weeks, or maybe less, we’ll see what February did in New Eden.