CCP has released the March update for EVE Online and probably the biggest change in the patch comes at the expense of alpha clones.

Borrowing from an in-game event

CCP had previously experimented with expanding the features available to alpha clones, with the Arms Race expansion in December of 2017 opening up new options for them, including battlecruisers and battleships.

But then came alpha clone bots running level 4 distribution missions, which turn out to be a reasonably lucrative thing to do if you’re just going to let a script do it for you.  This was covered over at The Nosy Gamer and led directly to CCP decided to remove level 4 and 5 missions from the alpha clone capabilities.  So that is the big change this month:

The March patch also adds the previously discussed feature that allows players to purchase and inject skills directly from the character tab, removing the need to go find a station that sells the skill. 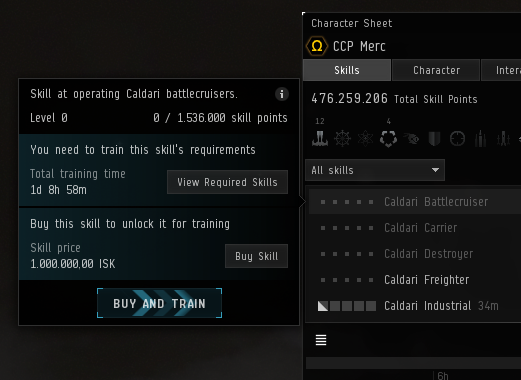 Buying from the character sheet

CCP has decided on a straight 30% markup for purchasing skills via this option, leaving some middle ground for those making money hauling books to Jita.  Arbitrage remains ever so slightly alive, though there is now both a floor and a ceiling on the skill book prices.

There were also some changes to the war declaration system, which remains a work in progress, to close some of the holes that people were using to exploit the system.

Probably the most mysterious item in the patch notes is this gem:

Adjustments have been made to the respawn rates of certain nullsec anomalies. These adjustments are part of a gradual ongoing process that will see further tweaks for this type of content.

CCP isn’t always specific about what they have changed and not every change makes the patch notes.  But we have seen one like this before,  Back in December this very same text was used, and the rumor then was that Havens were being tinkered with to try and trim back super capital and titan ratting.  I suspect this may be more of the same.

The only other highlighted item in the patch notes is:

The tooltip of a repairing module in the ship hud will now have a count-down, showing how long until the module is fully repaired.

I assume that means when you’re being repaired while tethered, as nanite repair paste already has a progress indicator on the module.

Oh, and there is something about sound, to which the bitter vet response must be, “EVE has sound?”

Otherwise there are lots little fixes and tweaks and graphical anomalies that have been addressed.  Your Lockstep boots will no longer clip through your Commando pants I guess.

Anyway, the word is out that the March update has been deployed successfully.  You can read about all the details CCP has chosen to share in the Patch Notes and on the Updates page.