I haven’t directly mentioned, much less played, Path of Exile is ages.  Back in 2012 it was the indie dark horse candidate in the ARPG competition to claim the mantle of heir to Diablo II.

In 2013 when it left beta and went live is looked pretty good.  In the lineup of the three, Diablo III had story, Torchlight II had offline play and mods, and Path of Exile had the feel of Diablo II… and the giant skill tree from hell. 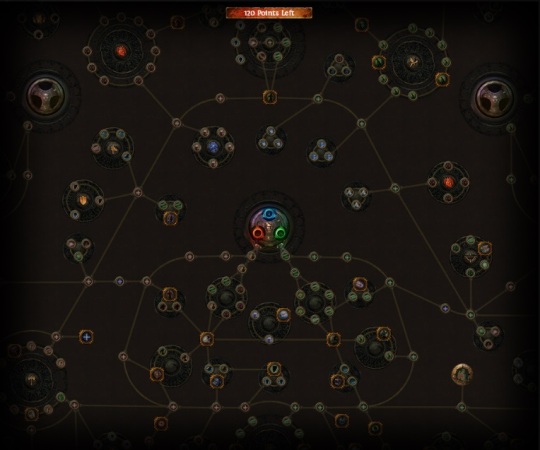 Oh, and it was free.  It is hard to argue with that price point.  So I went off to play it for a while.  Along the way I discovered that the game had a serious latency/desync problem that made it pretty much unplayable at random times.  That led me to walk away, never to return.  It wasn’t bad, but even without the network issues it was another ARPG on a list of ARPGs I had at my disposal.

But a couple weeks back in one of the online groups in which I hang out… at some point I am going to have to enumerate these various groups, if only to clarify it for myself… there was a call to come and play Path of Exile.  This was prompted by the coming of a new season… I guess Path of Exile has seasons like some other games… and the launch of the Path of Exile Synthesis update.

Anyway, I am much more likely to go play something if people I know are going to go play it as well.  Playing with friends, misery loves company, whatever it is I am often willing to go if there will be somebody around to share the story.

The update was scheduled for last Friday, so I grabbed the installer and patched up in advance, then did one more patch up when Synthesis hit and I was ready to go.

I was a little uncertain as to what seasons really mean in PoE.  They seem to be fresh starts separated from any current characters you have akin to the seasons in Diablo III, with some new features and content beyond what Blizz offers for their seasons.  I managed to get into the right season with the right options with a new character.

I went with the Templar class.

I had considered going with Ranger, remembering the last time I played when melee classes were especially hard hit by the latency and desync issues.  However, PoE is influenced by old Diablo II in many ways, including the whole idea that choosing a class also means choosing the sex of your character.  That feels like something of an outdated idea these days, though that may be my MMORPG-centric sens of things speaking.  Anyway, since I am more engaged when I identify with my character… which usually means a male that looks somewhat like me… that left me out of the running for a couple of classes.

The Templar though… the Templar looks like I feel some days.

Which is to say he looks like he might be an extra from the medieval version of Dad’s Army.

Things start off pretty much as I remembered, with the shipwreck scenario (rather than the jailbreak scenario) and picking up a few items on the beach with which to clobber the locals.  The Templar is all about beating things with blunt objects at the start.

I was in for a bit of a rough start as I had forgotten pretty much everything about how gems and sockets work and, frankly, beating stuff with blunt objects is long and tiring work.  But when I realized that gem mean skill, and skill mean kills, I was all over that.  And then I found the gem for thee holy fire totem.

This baby basically does my killing for me.  And if there is an especially tough mob in the mix, I whack it with my stick. Cleanse them with holy fire!

As for passive traits and the skill tree from hell… well, mine is chaos.  I’m all over the map.  I decided that the flame totem thing was so good that I had better stock up on mana.  Then I boosted strength.  Then I went down a path that made my defensive abilities more effective.  I guess I am sort of a tank, as I also have a gem for a healing totem.  We shall see.  My build my be complete comedy when we try to play as a group.  But for now, solo, I just abide while my totem burns stuff down.  And then it is time to loot! 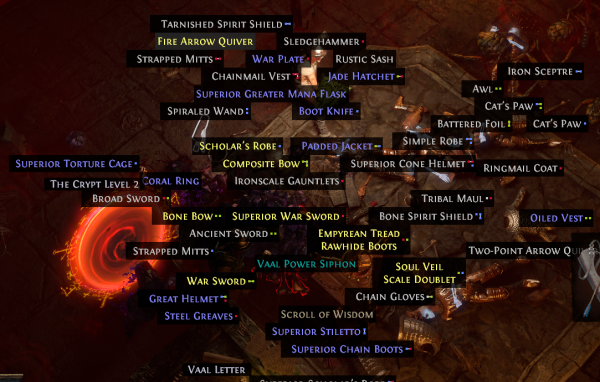 Not every loot pile is this big… but some are

Of course, picking up PoE right now has led me into something of a crowded field of games I am currently trying to play.  I am still logging into WoW regularly and go on a few fleet ops every week in EVE Online.  I still have a game running in RimWorld and I spent a bit of time in Minecraft earlier this month. (I’ll get to that in another post.)  Also I just bought a copy of Diablo on GoG.com the day before the Sythesis expansion/season went live, and I want to play through that.  Then, of course, this coming weekend is the 20th anniversary for EverQuest. I plan to peek in on that.  And finally there is the unlock of The Mines of Moria expansion on the LOTRO Legendary server tomorrow.

Something is going to have to give here.

4 thoughts on “Path of Exile Synthesis”