I guess skill points are the new incentive of late.  We used to get them as an apology present from CCP now and again, the last batch having arrived earlier this month because of the chat system issues.

But we’re also getting them as straight up handouts to incentivize people to log in.  There was the login event back in November.  And in December there were skill points given away for logging in during the 13 Days of EVE event.  And now we have… sn April Fools event I guess… where you get some free skill points for just logging into EVE Online.

As before, the skill points will be doled out over several days, Friday, Saturday, and Sunday this time around, and be split into Alpha and Omega rewards.

The skill points can be applied to any character on the account that logs in.

I am not sure what prompted this event, though the cynic in me does note that it is landing at the end of the first quarter of 2019.  Perhaps CCP has some monthly active user (MAU) goals it needs to achieve, so it is incentivizing getting people to log in to boost that number.

Whatever.  I’ll be logging in to claim my skill points.

The EVE Online monthly economic report is out for activity in February and I am not all that excited about it.

It has been two years since I started posting regularly about the EVE Online monthly economic report, this being the 24th such post.  At the start it was about charting the growth of the economy in Delve after we fled there following the Casino War.  Then it became an attempt to watch the economy over time, to chart the course, not anomalies, and to see if changes CCP made would have any impact on things.

Over time the monthly post became formulaic.  You can look at the last few months and see that I have noted a little rise in something here, a little decline in something there, that and event or a war meant people spent less time ratting and mining and more time blowing things up, but otherwise there hasn’t been all that much dramatic.

Basically, the idea has become a bore.  Not very exciting to write and, I suspect, even less so to read.

The New Eden economy is still important and is fairly unique in its pervasiveness in an MMORPG and I still want to write about it.  So, instead of the same dozen charts every month I think I will try to focus on one of two things that are indicative of some problem or change.

This month it will be a problem, and the problem will be that most wicked of problems, money… as in there is too much of it in the New Eden economy and somebody needs to turn down the taps.  The CSM minutes section the economy brings this up, both that it encourages botting and that it is driving up the price of PLEX.

They [CCP] say that the biggest problem is botting which is an ongoing for a long time. In general, CCP wants to tune down the faucets for ISK and minerals which they think are a bit high right now.

Even Hilmar was on about ISK during his AMA on the EVE Forums earlier.

I think the situation with the ISK economy is out of control. There are too many ways to create risk free ISK income streams.

There is a lot of ISK pouring into the game every month. 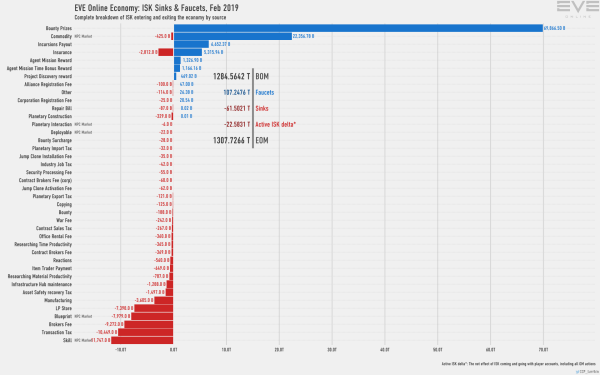 Of the 107 trillion ISK that entered the economy via various faucets, 65% of it was from NPC bounties.  And February was a bit of a down month for ratting.

The month before it was 130 trillion ISK coming into the economy, with NPC bounties holding the same percentage.

CCP has been taking money out of the economy by chasing botters and illicit RMT, as covered over at The Nosy Gamer.  But that is a labor intensive effort that isn’t as easy as you probably imagine it, made even harder by the fact that a false positive… banning the wrong person… is more than a minor faux pas.  Meanwhile clever botters carry on undetected.  So CCP seems to be targeting anomaly ratting again.   I recently demonstrated how that could be a pretty hands off activity, making it a ripe avenue for bots.

While the Spring Balance changes coming in on the 9th of next month are headlined by a rework of remote repairs, there are a couple items in there likely aimed at botting and ISK generation.

The Vexor Navy Issue, the most favored sub-cap hull for null sec anomalies, is having its drone velocity boost removed, so anoms will take a bit longer, and its signature radius increased, so NPCs will be more likely to hit it.  Likewise, the Gila, more of an abyssal space boat, is having its drone hit point bonus reduced from 500% to 250%.

We’ll see.  I’d have expected more for such a high priority item.

And we won’t be able to see until May, which is when we’ll get the ratting data from April, so I will have to mark this down as something to come back to.  But I guess that was the idea.

Which leaves what to say about next month’s MER.  I think I will look into mining for that, taking a final measure or the rate of rock crunching in the report on March.

Anyway, all the usual charts and data are still available in the MER dev blog if you want the bigger picture.