As I wrote last month, I am going to try to look at more specific aspects of the monthly economic report going forward.  We got the March report last week, just a couple days after the April update introduced a series of nerfs to both ratting and mining.  I took a measure of ratting last month, so this time around I want to get the “before” picture for mining. 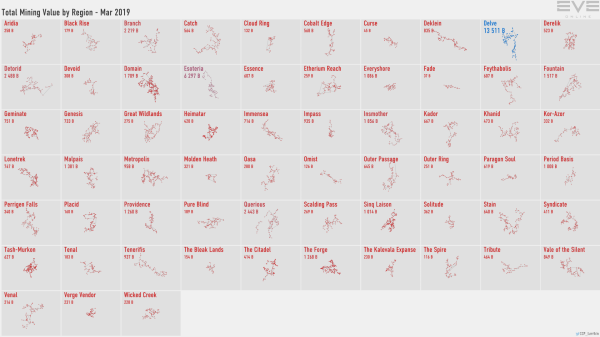 There was, as usual, a lot of mining going on in March, a good chunk of it in Delve. 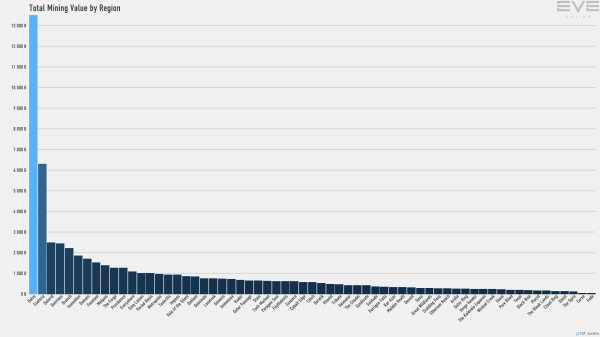 The price of ore itself was up just a bit in March. 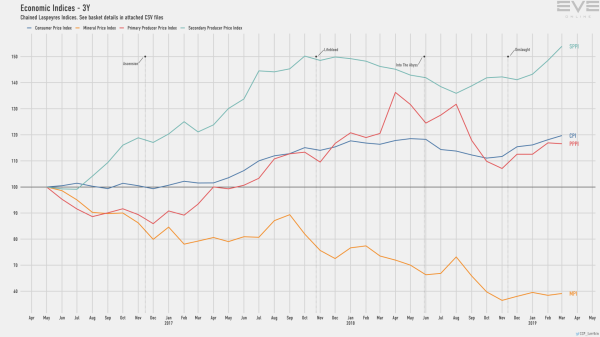 I am not sure that is enough to account for the difference between the two months, but overall the count is close enough that the two months are pretty on par.  February being three days shorter than March could make up the difference.  Dividing the total amount by the days shows the per day yield tilted towards February, with 2 trillion ISK per day versus 1.9 trillion ISK per day in March.  Still, pretty close.

Reduced yield and slower cycle times for excavator drones are direct swipes at Rorqual mining efficiency.  Reduced PANIC duration makes Rorquals more likely to die while waiting for rescue to arrive and larger excavator drones means that Rorqual pilots won’t be able to stash so many excavators in mobile depots to save them from destruction.

The Rorqual also won’t provide as much protection to mining barges and exhumers in their fleets, though the mining yield for those craft will go up, an incentive to fly the smaller and more vulnerable subcap mining ships.

So the question is whether or not these changes will have any impact.  We will have to wait for the economic report for April to come out next month to see.

Meanwhile, going back to last month’s post, the top sinks and faucets chart shows bounties were down a bit, continuing the trend from February. 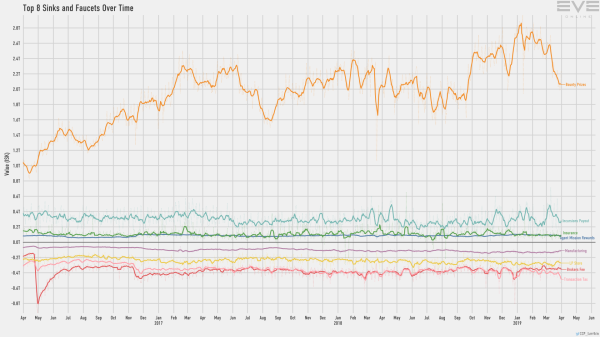 Overall February and March were not that far apart, being about 70 and 71 trillion ISK in bounties respectively, but the chart is trending down and the bounty payouts per day were almost 2.5 trillion ISK per day in February while that sank to 2.3 trillion ISK per day in March.  We will see if the April update changes, which hit fighter damage application against sub caps (which hurts carrier/super carried mining) and nerfs to the Vexor Navy Issue (the favored AFK anomaly sub cap) keeps that trend pointed down.

You can find the full March economic report here, which includes all the usual charts and graphs, plus the data used to generate them.