The Village and Pillage update has me back and running around in Minecraft.

While the first day login issues seem to have passed for Minecraft Realms, the world does still seem to be loading up slowly.  If I jump in a mine cart and take a ride it does seem to take some time for the world draw to catch up with what I am doing.

Not that it isn’t interesting.  The draw routine seems to start way down at bedrock and often I am treated to a glimpse of what is going on underground and can see the shadow outlines of all the usual dark dwelling mobs. 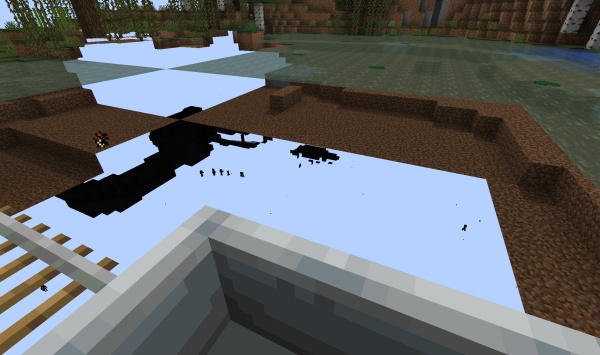 Something going on down there

It is occasionally disconcerting as my mine cart rolls on into empty space, but since I keep on rolling and the world eventually catches up, I guess it is okay for now.  I am still not sure if this is because the 1.14 update is that much harder on the CPU or because Minecraft Realms is just over burdened by people coming back to the game for the new stuff.

New stuff was certainly one of my goals.  And at the top of that list was finding a bamboo forest and some pandas, because of course it was.  But, as I have mentioned in the past, having an old world is a burden at times since a lot of new stuff only spawns when the area you are in is first generated.  So any place I have already been won’t have bamboo forests or pandas or the new villages or other things like that.

That mean that, as with the warm ocean, I was going to have to go exploring.  So I got out the last render I did with Minecraft Overviewer to fine a likely direction to head off towards.  As a group those of us on the server have wandered about pretty far, so finding unspoiled country is a challenge without the map.

With the map though I was able to spot a potential place to start.  There was a bit of coastline up off of the great northern rail line that I had not explored beyond, and it was not too far from an outpost I had already provisioned. 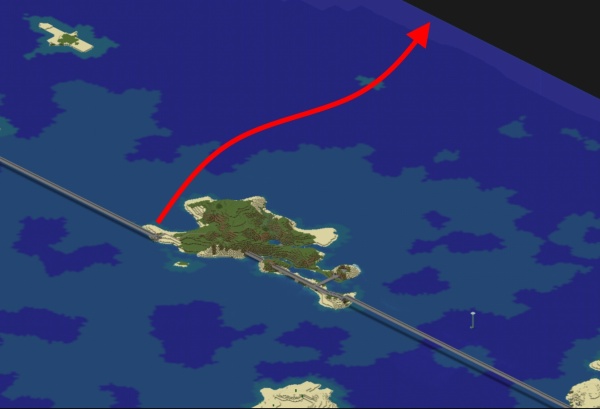 Just past an ocean monument that has been cleared out

So I headed there, grabbed a boat, and set sail.

Some stuff beneath the ocean floor visible

Boats are pretty much the ideal exploration vehicle in Minecraft these days.  They are now pretty durable, they move as fast as mine carts, and they don’t wander off like horses.  Also, open water is reasonably safe at night, even with the sea zombies (the drowned) about, so you can just keep on rowing… and a number of underwater things are lit, so much easier to spot at night.

Of course, it is still a crap shoot as to what you will find if you head off in any given direction.  But I got lucky.  Not too far into my rowing I ran across an island that had a shipwreck at one end.

I added the torches to it

Shipwrecks have chests on board that have a chance of having a number of items.  From one chest I got a few items, including a buried treasure map.  But from another I got three pieces of bamboo.

That wasn’t the bamboo forest I was looking for, but it was something new to work with.  I turned around to bring this new item home… and then my boat got caught in a bubble column above some magma and sucked down to the bottom of the ocean.

Note to self: Don’t stop and stare at bubbles under your boat.

But I had some wood with me, so I built a new boat and headed back towards the mainland.  There I jumped back on a mine cart and headed to the nearest town where I started experimenting with planting bamboo.

Bamboo is planted the same way you plant trees.  No need to cultivate soil or anything, just stick it in the dirt or sand or whatever it seems.  Unlike trees, bamboo doesn’t seem to care about being in the shade of its neighbors or anything.  I played with spacing and found it would grow no matter how densely you packed it, though moving around through it was much easier if I left some empty row.

And it grows fast.  Very fast.  And tall.

A couple of my doggos in a bamboo patch

You harvest it the way you harvest sugar cane, which means chopping it off and the second block up from the ground if you want it to grown back.  While you can chop at it with an axe, one swipe with your sword will work if you’re in a hurry.  The only problem with that is it does seem to wear out your sword pretty quickly.

Though maybe I was just chopping a lot of bamboo.  My three pieces soon turned into a dozen then a couple dozen then a stack then a few stacks.  I decided to move along from the village I was hanging out in, and as I passed through the nether transit hub I left a stack in a chest for Panadar to grab.  Now he has bamboo to plant as well.

As I move around I keep planting some bamboo as I hit each new village.  Those three initial pieces have now been spread far and wide as I carry a bit with me to plant where every I go.

Of course, there is the question as to what one should do with all of this bamboo.  You can make sticks out of it, which isn’t useless if you need a lot of sticks, but isn’t something I need a lot of.  It also makes a quick to obtain, if inefficient, fuel source for furnaces.  I might need that in a pinch.

But the key thing you make from it is scaffolding, which is what you think it is, a temporary, easily removed structure that you can climb around on as you build your real structure.

Where was that when I needed it a couple years back?

Anyway, should I decided to build more structures I will have scaffolding as an option.  But I still have to find a panda first.  Back to exploring.

3 thoughts on “Bamboo Proliferation in Minecraft”