It started off as many evenings do, with an FC taking us out to shoot structures.  Shooting structures sets timers which end up with explosions one way or the other.  Either we blow up the structure or the owners come to defend it and we get a fight.  Asher Elias called this putting money in the bank.

Pittsburgh2989 had scoped out a few low sec structures that Pandemic Horde and NCDot had dropped.  They were busy elsewhere, so we formed up a Ferox fleet, loaded up on bash ammo, and headed out.  Even Logi were encouraged to add firepower, so many of us loaded up combat drones.  The first target was only a few gates away.  An Astrahus, it turned out to be low power as well, so we got to burn through both the shield and armor. 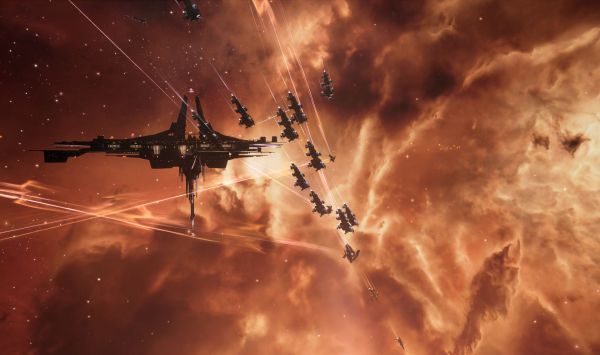 Feroxes cruising along during the shoot

Once that one had a final timer set for six days hence we moved off to the next target.

The second Astrahus was powered so we only got to burn through the shield to set the armor timer.

The fleet itself was fairly quiet.  There was some discussion of the current hockey game, the Sharks vs. the Avalanche, to rile up Pitts because the last team he supported had already been eliminated from the playoffs.  Somebody decided to see if you could reinforce a structure with smart bombs.  Apparently you cannot, though you can kill a friendly drone or two.

With that timer set we moved on to the third target of the night.  However, when we arrived we found a small fleet from Did He Say Jump in the system with us.  DHSJ is a low sec PvP corp, once part of the most recent incarnation of Black Legion, into whose home area we had wandered.

While they had fewer ships than us, a dozen Legions, a pair of Lokis, five Guardians for logi, and some support, they were still a formidable force.  Low sec groups like that bling up their ships with office mods and tend to run full sets of implants since people don’t pod you as readily as in null sec.

While we have about three times the numbers, our core was 34 fleet fit (meaning cheap fit) T1 Feroxes, though most of our logi was the more durable T2 Basilisks.  That meant there was no guarantee we could trade well with them.  It was also pointed out that we were close to their home and that it was likely that they would drop HAW dreads on us if we got engaged.

With this info, and the DHSJ fleet’s desire to engage at a specific range when we bounced around them, Pitts held back from getting tangled up with the T3s.  The first thing he wanted to know was whether we could counter drop with our own dreads.

Just hearing that got me to log my capital alt in and clone jump him to our staging and put him in my Naglfar there.  However, the distance was not right for us.  We would have to either mid point or take a couple of gates to get into range to drop, either of which would make us forming up to drop obvious and would leave us vulnerable going in and out.  The counter drop was off the table.

At this point the DHSJ fleet had pulled back from where we had been moving around into Amamake, where they were sitting on the gate.  Pitts felt that if we could start in up close to them we might have a shot, so piled us up on the other side of the gate to jump in.

In we jumped and the fight started.

While we exchanged blows they quickly lit a beacon and dropped in a Ninazu before we could pop the cyno.  That made things tough on us as with those reps we were struggling to break the tank on any of their ships.  We came close, driving a Loki deep into hull at one point, but things were not going our way in a straight up fight.

On the flip side we were holding up well.  It went into semi-busy mode for those of us in logi, though targets changed slowly and we kept people alive.  I was the first logi targeted but broadcast quickly and was never in any real danger once reps hit.  I did notice that somebody on the DHSJ side was also throwing fireworks along with projectiles. 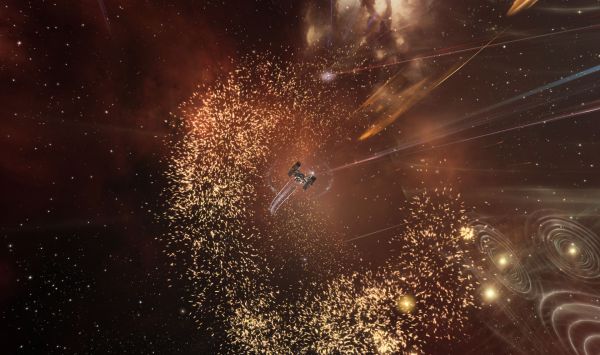 My Basi flying through the fireworks barrage

Pitts ended up using the AOE MJD on the Stork we had with us to boosh us and some hostiles around, which opened up an opportunity to get in a kill on a Loki when it was momentarily out of optimal rep range.

However, that moment was short lived as another cyno went up and a Naglfar dropped in to join the fight.  We managed to kill the cyno ship, as well as one of their Guardians, but after that the Nag began burning through the T1 ships in our fleet.  One barrage was not enough to zap a Ferox, but it would knock them into structure leaving so little buffer than even if we repped up shields to full the next volley would finish it off. 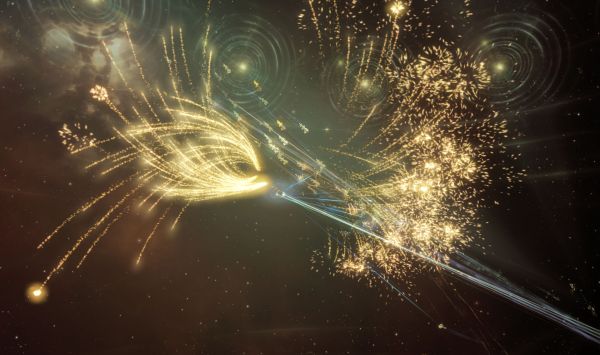 And the fireworks kept coming

Pitts tried to get the MJD trick going again, but with only one command destroyer and the cool down time and people fumbling about getting in range at times, it just wasn’t happening.  As losses mounted he had us align to the sun and warp out.

From there we set our destination for home and headed out.

The results were not too bad, though DHSJ killed a lot more ships and ended up ahead in the ISK war according to the battle report.

Of that 1.6 billion in kills we managed, 1.1 billion of it was in the Loki we managed to kill, with almost another 400 million in the Guardian.  A Harbinger and the cyno Prospect made up the balance.  Our biggest loss was a Cyclone command ship, and I am not sure how we let that one slip.  We were otherwise doing well keeping the T2 ships alive, their resists helping to keep damage under control.

In the end it was an interesting and fun asymmetrical fight.  We could have kept going for quite a while if we had been able to kill the second cyno in time.  But once that HAW fit Naglfar was on the field and toasting Feroxes we were done and had to concede.