Three things that fans of the genre complain about all the time, and even the developers acknowledge as issued now and then, which are just never going to be “solved” in any acceptable way.

World of Warcraft has been getting some heat for this one of late, both because the level scaling in Battle for Azeroth practically punishes you for leveling up and because they gave us access to a whole bunch of allied races which, if you want to play them, you have to level up. (Or pay for a race change for a current character, or pay for a level boost I guess.)

The moment hits at last

The problem is that levels are an easy solution to issues like gating content and giving characters a sense of progression, the latter being critical for an MMORPG.  The alternatives, like skill based systems, just don’t cover things as well or as obviously.

In fact, levels are so sublime that even systems that ostensibly do not have levels end up effectively having levels.  Take EVE Online, once an outlier with its skill learning system.  Your skills level up, even when you are offline, something viewed as a boon.  Skills gated content, in that you needed the skills to use various ships and equipment.   But skills continued on at the same pace, offline or on, with no way to speed them up, which many people found frustrating.  Flying a titan, for example, was just going to take you a couple of years.

Meanwhile, back in level based gamed like WoW and EverQuest, the developers found ways to add another layer of levels.  Item levels gates content in Azeroth and stand as the thing for players to obsess about, while over in Norrath a whole vast and complex Alternate Advancement tree exists to absorb your experience once you’ve hit level cap, if not before.

The main problem with levels is that they reach a point of absurdity if you’re not careful and act as a deterrent to new players.  It doesn’t matter how easy the climb to level cap is… and it is arguably worse if it is too easy… if a new player sees they are level one and the cap is a three digit number.  And once you’ve arrive at that point there is no easy way out.  A level squish is madness, but so is carrying on as before.

But getting to a point where too many levels is a problem is generally a sign that you’ve succeeded so far, so how do you quit them once they’ve built your empire?

It is fun to listen to somebody complain about grind one day then wax poetically about the good old days of experience groups in EverQuest.  It helps settle in your mind that grind has no realistic definition.

Grind is basically something you don’t like doing at that moment.  The problem is that what is grind for one person is fun for another and the same person may enjoy something one day and feel like it is grind the next. 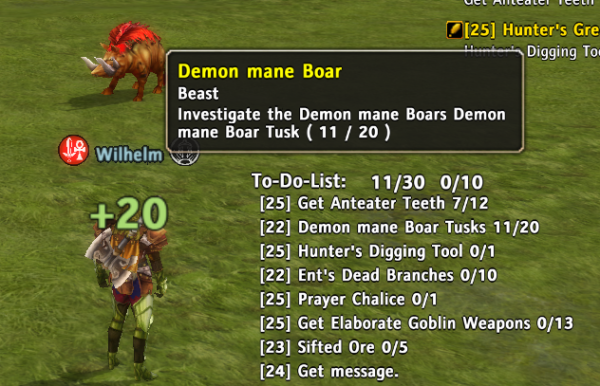 Some days just reading the quest tracker feels like a grind

I cannot name an MMORPG where things do not eventually feel like a grind if you do them often enough.

In EVE Online missions are one of the basic PvE activities and people complain about them being grindy and boring all the time.  People are always asking CCP to add more missions or to make them more interesting.  However, CCP said at some point last year that there are over 4,000 missions in the game, so it feels like the “adding more” check box has been checked repeatedly.  And when CCP adds missions that are more interesting, like burner missions, people complain that they are too hard if they get blown up or that they are a grind once the player solves the mission and getting blown up is removed as a risk.

So CCP added abyssal deadspace missions, which have a random element to them, which appealed to some people, but which drove the risk averse away.

Somebody… maybe Scott Jennings… wrote once that there is a fine line to making a quest or event interesting.  It cannot be too easy, lest it feel like no gain at all, but it also cannot be too difficult, or it will drive people away who fail at it.  A quest has to be both easy enough to knock off and hard enough to feel like you’ve accomplished something, otherwise it can feel like a grind.  And even a mission or quest that is perfectly tuned for your skill and level can feel like a grind if you’re not in the mood or you’ve done it many times before.

Grind is just the dark side of advancement/progression, and advancement is the reward drip that keeps us going.  Basically, if you want some form of progression you’re probably going to feel like you’re grinding at some point.

Which isn’t to say that some quests… or some game designs… don’t just suck.  But you can find grind in your most favorite game ever if you hang around long enough.

Unlike the first two, this is one that a game company probably could fix.  They just won’t.

If you’ve played a popular MMORPG you’ve probably run into login and server queues at launch or when expansions land or when updates hit or when they launch a special server or at some other time.

You want to log in and play but so do a lot of other people, so the login server is struggling and the game server if full and you’ve been put in a line outside and given a number that may or may not dynamically update as time passes.

Even LOTRO had a queue for Legendary

Back in March, during the 20 year EverQuest anniversary, I saw somebody on Twitter raging about Daybreak having had two decades to fix they game and that it was completely unacceptable that they should have to wait in a queue.  Daybreak had failed completely.

Leaving aside the whole “20 year old game launches a new server and is popular enough to attract a queue,” the team at Daybreak has actually spent quite a bit of time working on its server capacity.  The servers hold more people.  They now have the ability to spawn multiple versions of zones to alleviate crowding.  They even have a server queue, which wasn’t a thing… or even a thing they felt they needed… until a couple of years back.  Daybreak, relative to its size, has actually done considerable work on this front.

Likewise, last week… and the week before… Blizzard held WoW Classic beta stress tests to simulate the loading that the WoW Classic servers will likely see when the launch in August.  Blizzard has a whole new layering system for the launch of WoW Classic that one hopes will keep down the total number of servers… or half the people you know will end up on different servers… while keeping the crowding and queuing problem from getting out of control.

And yet I expect that there will be queues, even horrendous queues, at the launch of WoW Classic.  I expect the first night to be a rush to get in.  People will want to get started, do server firsts, and whatever else.  It will be a spectacle, and people who play the live game will try to log in, even if they don’t plan on playing.

There will be queues, we should expect it, and Blizzard shouldn’t spend a bunch of time or money trying to fix that.

Because it is a temporary problem.  We have seen it in the past.  LOTRO Legendary, EverQuest progression servers, any give WoW expansion launch, the queues are minimal in a few days and gone in a couple of weeks.  It just isn’t worth the investment for such a transitory issue.

Yes, there are always those few WoW servers that have a queue six months after an expansion launches.  But that is a different problem.  When there is a long list of low population servers available Blizzard should be offering free transfers for people to move.  That is the fix.  Use the capacity that already exists.

I am sure there are other things that won’t get fixed… I had “old content” scratched in my notes for this, but forgot what I was going to say… but these three, we will be complaining about them for years to come because they won’t ever go away.