Our operations have slowly been taking us further east.  The range of systems covered directly by capitals based in our staging system have been denuded of structures and ihubs.

Systems our capitals can reach in one jump from our staging

DOTLAN doesn’t show the “shape” of space, it being a representational layout attempting to group systems in a region together onto a single useful map rather than worrying about the actual distances between systems.  So, for example, SH1-6P looks to be much closer on the map than other systems we can reach.  But that isn’t the reality… whatever that means when we’re talking about a video game… of the actual layout of the stars which, among other things, are not a nice flat array but are in fact a three dimensional matrix of systems connected by star gates.  The in-game map tries to show you everything in 3D, and even if you use the “flatten” option, shows the stars in space with their actual distances (on one plane at least), which is why it is both so pretty and so useless to the average player.

Also, we haven’t spent much time worrying about the Territorial Control Units, the TCUs in each system, since aside from setting ownership on the map, they do not have any impact on the system.  The Infrastructure Hubs, the ihubs, are the key and they have all been blown where we can reach.  A few enterprising groups have been going out to flip the TCUs to get themselves on the map, but even where the systems still show NC. or -10.0 the ihubs and structures therein have been purged.

Anyway, we have been moving farther afield.  Sub cap operations have been starting with a titan bridge to PNDN-V, putting us on the path to operations in the far side of Tribute and into the Vale of the Silent.

Saturday I went with an Eagle fleet to the vicinity of the PanFam staging system in SH1-6P.  Word was that PanFam was evacuating the staging to pull back deeper into their territory.  A glance at Zkillboard for their staging system showed that somebody was insurance frauding a pile of Megathrons.

Some of the Blue on Blue kills in SH1-6P

Those seem to have been all empty hulls (I clicked a few but not all of them), so I gather they were not worth moving or sending to asset safety, but the modules were.

We passed through the system unmolested and moved to O-0ERG where an Ansiblex jump gate was waiting for us.  We landed on it in a ball and began to shoot.  As usual, I had plenty of T1 bash ammo in my cargo.  Life in Reavers, and then Liberty Squad, has kept me prepared to shoot structures at all times. 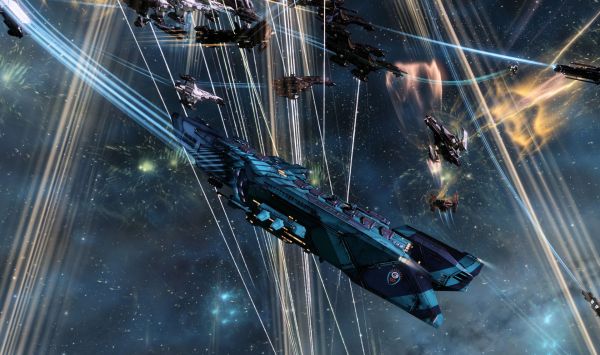 Being one jump away from a hostile staging system meant keeping alert, even if they were evac’ing.  While we were not the only fleet out shooting structures, at 100 ships we were a viable target if the locals decided to form and get a fight.

Our FC, whose name I’ve forgotten, seemed a bit on edge about the possibility of us getting dropped, but he was in the command channel where all sorts of information the line members don’t hear about things the enemy is up to is passed along.  We blew up the jump gate but were immediately aligned out to move.

On our way as the Ansiblex blows

We jumped into SH1-6P and passed through into D7-ZAC, where the FC had us start shooting a Pandemic Legion cyno jammer

Following the FC as we shoot

That did not last too long however, and he soon gave us an align point and told us that NCDot had formed a fleet and they would be coming for us shortly.  Vince Draken, long time NCDot lead FC, was bringing about 150 Eagles to fight us and we would be setting up for them.  The FC’s voice even sounded a bit stressed as he said we would be outnumbered and it would be a tough fight, so we needed to be on our game.

The enemy came through the gate and we started trying to hit their logi.  We failed to break the first couple and the FC switched over to targeting Eagles, which we were able to break and started to kill.  Things seemed to be going remarkably well considering we the odds were 3:2 against us and we were facing an veteran FC.  We were popping targets and almost nobody was broadcasting for reps. (Since I fly logi mostly I often forget and leave those broadcasts on in my fleet window.)

That was when I noticed that a full Baltec fleet of Megathron battleships had joined the fight on our side, weighing the odds heavily in our favor.  We were able to get some kills before the enemy fled, Vince Draken being one of the targets of the battleships who popped his Monitor FC ship.  The battle report shows that it ended up a very much one-sided fight.

That’s what happens when you’re out numbered.  I have screen shots of NC/PL dropping titans on us when we undocked Hurricanes back in Saranen during the Casino War, so I know what it is like.

Our Eagles were soon soaring alone on the field.

Eagle fleet spread out and chasing the FC

That was enough for us and we headed home.

Sunday several fleets were called up.  This time I went back to logi and joined the Baltec fleet under Pittsburgh2989.  This time we gated out to PNDN-V where a titan bridged us into the Vale of the Silent.  There we took up station and started shooting structures.

Baltecs already aligned out as the Azbel blows

But most of the time was spent reinforcing various structures in the vicinity.  A fleet had gone through and done the shield timer on a whole range of structures previously, so we were there to hit the armor timers as they came up.  This included a series of Athanor mining platforms that were mid-way through pulling moon chunks into position in order to be broken up and mined.

That was kind of a neat visual, and on this sort of fleet you have to be interested in the visuals or watching Netflix on another screen or something.  I spent some time in WoW running world quests on an alt during the fleet.  But I also watched the ships and the targets.  We had a group from Black Ops that were out in the Triglavian battleship, the Leshak, hitting the structures with us.

A Leshak with the Metamateria Exotica SKIN

They can be kind of mesmerizing to watch, with their one red beam hitting the target continuously. 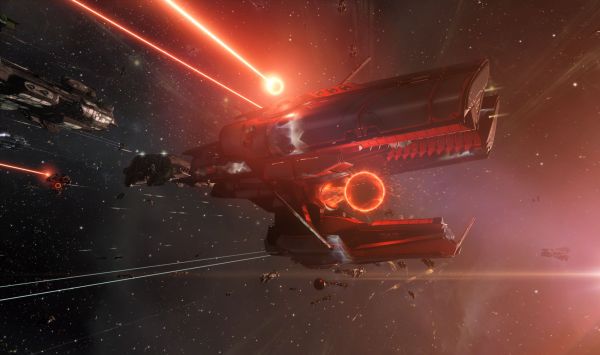 Seeing them makes me want to try out some of the Triglavian hulls at some point, though that will likely have to be something in a SIG.  They are too expensive and not abundant enough to be a main line doctrine.

We had a couple of the Triglavian tech 2 logi with us as well, the Zarmazd, which hit the game back in December, though I did not get a good screen shot of one of those.

What I did get to see is what happens when a mining platform gets its hull timer reinforced when it has a moon rock on the hook.  I have actually seen that before, but one of the Athanors had one very close to hand, ready for the mining action, so when it exploded it was right there on top of us.

And once it blows it leaves behind an oily black cloud that slowly dissipates.

The cloud as the explosion fades

It was a long fleets… past the three hour mark… but we reinforced a lot of structures and setup a lot of kills for a future fleet.  In a few days another fleet will be running around that area blowing up one structure after another.  We’ll see if I manage a return.

Tonight, or tomorrow morning EVE Online time, is another big structure kill.  The Keepstar in P3EN-E in the Vale of the Silent is set to come out of its final timer.  As with the two Keepstars last week, the fleets won’t even be forming up for the kill until almost midnight local time for me.  Kind of late on a weeknight.  Not something I can manage over and over.  But I am sure there will still be lots of people forming up to get on the kill mail.