When this post loads, the 2019 Steam Summer Sale will be officially over, being set to finish at 17:00 UTC today.

I was incorrect in my post announcing the sale back when it started.  I expected it to consist of a lot of the usual things.  Valve has been pretty consistent over the last few years with the tasks related to events which allow those interested to collect cards or levels or whatever.

This time around they decided to try something new.  And, as with many new things, it wasn’t without its problems.

The metaphor of the sale was a race, and you got to select which team to join.  Each team had an animal mascot.  They were tortise, hare, pig, cockatiel, and corgi.

Since people could select on their own, most of the population chose the cutest animal on the internet, the corgi, and so every day when I logged in the race looked something like this: 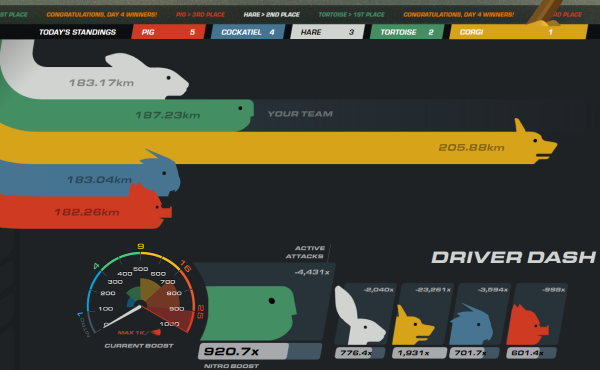 One of the least lopsided days

Corgi did not win every day.  Tortoise won a single day, and hare won twice, but otherwise it was Corgi on top for 9 out of the 12 days of the race.

Those on the winning team had a chance to win something from their wishlist.  There was some confusion as to how that would happen and, fearing they might be awarded something inexpensive, people began purging their wishlists of cheap indie games.  Since devs get stats on that, it was like an indie game apocalypse I gather.

Valve had to quickly tell people how to designate which game you would win, but I am pretty sure the damage was done by that point.

📣 PSA! 📣 You don't need to remove games from your Steam wishlist in order to win your Top Wishlisted Game during the Steam Summer Sale – just move your favorite game to the top of your wishlist and you're good to go!

As I mentioned in the month in review post, even after I knew what the deal was I decided purging my wishlist was a good plan.

There was also a hole in the system early where there was no cap on the number of points you could apply from qualified games from which you had earned achievements that allowed people to go crazy with points, buying badges, the discount, and boosting their Steam level into the hundreds.

Oh well.  I am sure Valve learned something along the way.  And I suspect that most Steam users ignored the whole thing.  My sample size for that assertion is pretty small… my daughter and a half dozen of her friends… but I was the only one paying any attention to that aspect of the event.

On the sale side of things however, my daughter did come to me for two titles.

The first was Rust, which had been on my own wishlist before the purge hit.

She and her boyfriend play that together.  How sweet.

However, her big game for the event was Megaquarium, which is a “run your own aquarium attraction” simulator.

She ended up not having to work over the weekend and burned through the campaign mode. I was looking over her shoulder when she added the whale shark to her exhibit, the crown jewel in the game.  I think she is one achievement away from being complete on that front, and you have to do that one in sandbox mode according to her.

This was her sort of game and she gives in a big thumbs up.

I only purchased one title during the sale, but it was one I have been thinking about for quite a while.  I now own Grand Theft Auto V.

Unlike my daughter’s choices, I was struggling a bit to even get started in GTAV.  This was primarily because it seemed to be all about having a gamepad controller to play it and seemed to be trying to hide keyboard commands from me.

Not that the basic keyboard commands were completely opaque.  It is the usual mouse and WASD for movement and such.  But about 10 seconds into the game somebody is yelling at me to use my phone to detonate an explosive, but there was nothing to indicate how I should do that.  Where in a normal tutorial a game might tell me which key to use, I had to dig into the menu, find where the commands were hidden, and scroll through the list to find the right key.

Fortunately, as a single player game, all the NPCs were able to wait, if not patiently.

I think I need a long stretch of time on the weekend to get into that.

Anyway, another sale passes and another one will hove into view a few months down the line.  It is practically part of the circle of life now.