The problem here is that being risk averse is the intelligent move. As stated above, null groups always have to be thinking about not just this fight, but the next one, the next ten, the next war. It’s coming. Whether you win or lose this one,  it’s coming. It’s coming whether you still have your space, your stuff, or even your pilots. If you’re in sov null, War Is Coming. And if you’re not getting ready for it, GET OUT. You have no business being there. Go to NPC null. Go to lowsec. Just get out of the way now, before the avalanche starts.

The blackout of local in null sec was met with much acclaim, followed by a variety of disappointments.  There is always something else needed to be done in order to “fix” null sec.

Arrendis has a piece up over at INN about why the blackout isn’t the fix for null sec or EVE Online.  In an epic length article he explores why null sec isn’t the blood bath of constant conflict that many feel it ought to be.  Leaving aside how much work a war can be for null sec leadership… the position of Sky Marshall has often been a one war job because it tends to burn people out quickly… Arrendis pins the blame for the risk averse behavior of null sec alliances and coalitions on one thing.  Can you guess what it is?  I’ll give you a hint. 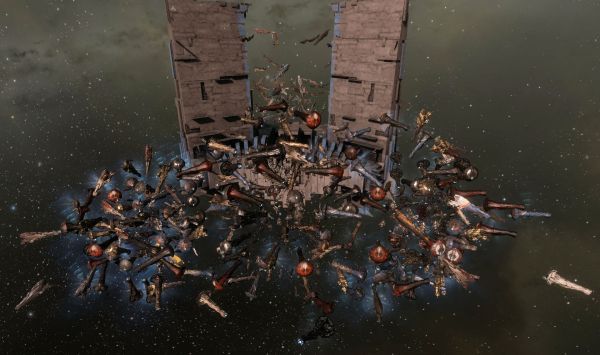 Titans.  Titans are the apex weapon in null sec.  To take and hold space over time, to be secure in your conquered domain, to be able to survive against hostile powers, you need titans.

In order to show up in null sec, take some space, and hold it over time, you need titans.  But you cannot get titans unless you hold null sec space.  You can build carriers and dreadnoughts in NPC stations in low sec, but for a titan or a super carrier you need to be able to deploy an ihub, install upgrades, drop a Sotiyo, and configure it correctly before you can start your first titan build.

So no null sec power will risk their titans, because to lose them is to cease to be a null sec power.  And once you’ve lost them and been evicted you’re out.  The best case scenario going forward is to have to depend on the titans of another power to cover you.

So how can CCP break this cycle?  Arrendis has some suggestions, which you should go and read.  I’ve stolen enough of his thunder here.  The article is long, but worth the effort.  Even the comments on the article are worth reading, save for the one that starts off with “Eh. Kinda too long to read.”

Anyway, you can find the article over at INN.