At least my efforts in moving that Naglfar across New Eden were rewarded.

Liberty Squad deployed north over the weekend, and after the structure shoots in Tribute our FCs were clearly looking for some blood.  From the moment we arrived at our new staging in Frarie we were out trying to provoke a fight with Snuffed Out and their local allies.

It started with some reinforcement timers in Frarie.  We have citadels there and so do they.  But when, on Sunday evening they declined to show up for one of them after we had formed, Thomas Lear and Cainun led us out to Sujarento, about 8 gates away, to reinforce a faction Fortizar owned by one of Snuff’s allies Pen Is Out.

They gunned the Fortizar for that, which made it a busy time for our logi wing as our Abaddon fleet set the first timer.

With the timer set to come out in less than 24 hours we had effectively scheduled the next big op, all while only losing a single Augoror.  Of course, then we lost five Abaddons on the way home because the locals formed a small fleet to catch stragglers and we apparently cannot all align.  You cannot spell “Abaddon” without “bad” I guess.

You don’t tell me where to align!

Anyway, the blood lust was on us.  Pings went out to get people on.  We were going to take this fight.  And, the next evening, at 23:00 UTC, we were piling into fleet while it was reported that the Snuff and allies had about 200 people logged into their staging system.

Once we got a pile of Abaddons together, along with some Leshaks, Cainun had us undock.  The call was for battleships ahead of logi, so I left my filthy Guardian in the hangar and went with the fat boys.  I trained up lasers ages ago so I like to use them when I get the chance.  So pretty.

We had battleships together, which were bridged in a group to the target, and dread alts on standby, logged in, in the fleet, and insurance windows open, ready to go if the fight escalated as we expected it might.

When we arrived we aligned to the target, which had already begun its 15 minute repair cycle. The Pen Is Out Fortizar

Snuff had a Machariel fleet waiting for us, which was what we had hoped to get stuck into.  We got on grid… maybe a little too close, since we the station PDS was hitting us… and the Leshaks began hitting the Fortizar while the Abaddons began engaging the Machs.  That was a fairly busy time, especially for our logi wing again.  But even in the Abaddons there was much to do, including capacitor management.  The fit isn’t cap stable and when the station is throwing void bombs at you that drain your cap… cap you need to fire the guns and keep your hardeners going… you spend some time feeding in cap boosters and turning things on and off just to get another shot in.

We were exchanging when my turn came up to be primary.  Logi was busy so many of us were letting our armor sit unrepaired until it got critical, so when I saw the yellow boxes light up on my overview it seemed unlikely that I would get enough reps in time.

Sure enough, my ship exploded.

I was floating around in my pod, nobody had time for me at the moment, when Snuff began jumping dreadnoughts into the fight.  As soon as that happened Thomas called for our dreads to insure and undock.  I swapped windows, dragging my main over to the second monitor and my alt onto the main, and undocked the Naglfar.  We jumped into the fight, sieged up, and began hitting targets.

I think was the third time I had used a dread in combat, which pretty much means I had little idea what I needed to do beyond going into siege and shooting the broadcasts… and hitting the emergency hull energized when I became primary.

You know how this ends… Fortizar visible in the background

By the time my number came up Snuff had dropped titans on us.  I lasted long enough that I had a titan on my kill mail.  That might be another first for me, first capital loss and first capital hit by a titan.  The hull energizer kept me alive for a while, which may have saved somebody else as people had to keep shooting me for a bit.  But I was dead soon enough.

After that I was sitting around in system in two pods.  At that point I realized that my main actually had implants and that maybe I shouldn’t let him just sit around.  I gated him safely home to our staging.

My alt was implant free however, so he stuck around on grid taking screen shots of the unfolding fight, some of which I put in a gallery at the end of the post.

Once the titans were on grid the battle was decided.  Dreadnoughts were as far as we could escalate, so after a few more targets people who could jump out did.

By any reasonable measure, we lost the fight.  We failed the objective, lost more ships, lost more in ISK value.  But it was the battle we had been aching for.  I, for one, had been dragging that Naglfar around with me since March waiting to drop it into a desperate fight.

I tried to do a battle report, but as I always say, low sec is strange.  Low sec groups can be as clannish as any null sec coalition, so it is difficult to tell who was there with Snuff and who was just there, so I sorted the header into Imperium and everybody else.

That was a lot of people in system during the fight.  Enough to help make Sujarento the most violent system in the last 24 hours per DOTLAN. 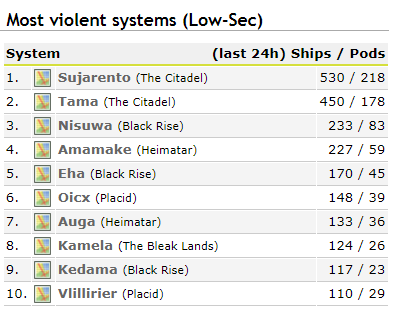 Most Violent Winner of the Night

And lest you wonder, the vast majority of that violence occurred during a pretty tight time frame. 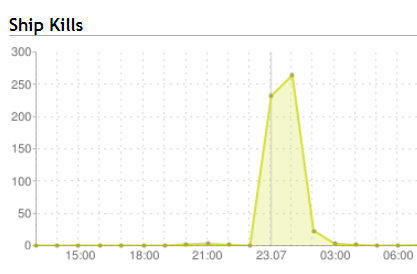 That peak, that is us

However, despite the pile up of players in system over a short duration, there was no time dilation invoked that I saw.  Maybe somebody had the foresight to reinforce the system.  There have been times in low sec where just gating a group of 60 ships have brought tidi into play.

Anyway, we have introduced ourselves to the locals by throwing them a nice party.  We’ll see how things develop from there.

Selected screen shots from my pod.  Click on the pictures to enlarge.

An explosion over the Fortizar as Titans loll about

A doomsday reaches out for a Naglfar

Explosions and wrecks on the field

A dread explodes in the middle of the pack

Explosions so bright they out shine the stars